Is Houston underrated as a bike city?

The city has eight months of ideal cycling weather each year and has taken some sizable steps in building out its bike infrastructure in the past decade. But is anyone outside of Houston paying attention?

The city has eight months of ideal cycling weather each year and has taken some sizable steps in building out its bike infrastructure in the past decade. But is anyone outside of Houston paying attention?

“They say that Houston is a crappy place to visit but a wonderful place to live.”

— Stephen Klineberg to Lawrence Wright, "The Dark Bounty of Texas Oil," the Jan. 1, 2018 issue of The New Yorker

There are cities—mostly European, but a few in the U.S.—that can place biking in their "top-five reasons to move here elevator pitch," but Houston is not one of them. However, it's making some significant strides and is by all accounts heading in the right direction.

"Houston maintains a reputation as a Sun Belt city built around cars, but when you look at the progress we've made in recent years, from ridership growth to the build-out of the bike network, it's clear that momentum is on our side," says Joe Cutrufo, executive director of Bike Houston.

A lot of how you view Houston as a bike city depends on what kind of cyclist you are. Just as there are different types of drivers and reasons for driving, there are different types of cyclists and purposes for riding a bike. Some are bike commuters, either by choice or because they can't afford the cost of a car, sometimes for both reasons. There are sport cyclists, for whom going as far as possible as fast as possible two to five times a week is the overarching interest. And then there are the recreational riders, those who don't care about meticulously capturing every mile and metric of their rides on Strava. These are the riders most often seen on the Bayou Greenway trails each weekend and the category of riders that saw the most growth during the pandemic bike boom. Conversely, for me at least, COVID-19 resulted in fewer miles ridden last year, as the weekly group rides I enjoyed three or so times a week were forced into suspension by social distancing. Some riders span all three of these groups. I mostly straddle the first two.

Like a lot of things related to planning and development, Houston has found itself playing catchup with a lot of other cities when it comes to becoming a multimodal city.

Whenever we talk about improving bikeability, walkability and multimodal transportation in Houston and Harris County, the conversations often are peppered with words like future, vision, goals, challenges and opportunities. It's about the needs that still need to be addressed to become a city better suited for cyclists (and all Houstonians) someday, at some point in the future.

But what about the Houstonians who bike the city and surrounding areas today?

Lawnstarter recently compiled a ranking of the 200 best biking cities in the nation using "18 key indicators of a bike-friendly lifestyle" across four metrics: access, community, safety and climate. Overall, Houston came out just about in the middle of the pack, tied with Indianapolis at No. 106. Among the 21 Texas cities included, it was the fourth-best biking city, behind San Antonio (87), McAllen (99) and Austin (104). For "access" alone (including miles of bike lanes per square mile), Houston was 37th in the U.S., by far the highest spot for a Texas city, and 20 spots ahead of the state's city with the second-best access, San Antonio.

The roads in Houston can be hazardous places for anyone, drivers included. When it comes to safety, cities in California and states in the south are the deadliest for bicyclists, according to Lawnstarter's ranking. Over a five-year period, of the 20 cities with the highest number of bicyclist fatalities per 100,000 residents each year, two were in Louisiana, six were in Florida and seven were in California. The other five were in Arizona, New Mexico, Colorado, Virginia and Missouri.

However, it does appear that Lawnstarter's ranking of Houston for "access" was accurate, especially compared to SmartAsset's, whose "Most Bike-Friendly Cities in America" list came out a day before Lawnstarter's. SmartAsset placed Houston at No. 93—out of the 100 largest U.S. cities.

A big problem I see for Houston in the data set used by SmartAsset is the 0.75 "miles of protected bike lanes" they have for the city, which is outdated. According to SmartAsset, the data came from People for Bikes, which also ranks Houston’s bike lane network suspiciously low. I can only wonder if it’s because they don’t have current metrics.

Through its Bike Plan, Houston has committed to the creation of 1,800 miles of bike lanes. Currently, there are some 345 miles of high comfort bike lanes, defined as those safe for use by riders of all ages and abilities, and 25 miles of those are protected lanes (with another 24 miles in the works). Initiatives such as Complete Streets and Vision Zero have been implemented to improve safety for everyone. (Now comes the harder part: Doing the work that's required to achieve these goals.) And the BCycle bike-share program continues to grow.

Overall, says Michael Skelly, a cyclist and member of the Houston Parks Board's Board of Directors, when you look at Houston, it's improving dramatically. "But compared to Chicago, D.C., and other cities," he says, "it's not clear that Houston is remaining competitive. At most, it's holding its own."

One thing that attracts many people to biking is the social component of riding with others. That and the increased safety that comes with group rides, i.e., more cyclists means more visibility and increased awareness among drivers. It's hard to quantify the degree to which my social bubble has been stretched by people I've met on group rides. I have married friends who met randomly on one of the regular Saturday morning group rides in town.

It's for these reasons that "community" factors heavily in a city's position among its peers for its degree of bike-friendliness. The logic being that a strong bike culture (demonstrated by attributes like cycling clubs, coffee shops and bike shops) will encourage increased social activity with others who bike, which will lead to more biking.

Also, as is the case with infrastructure, a city like Houston has some control over its bike culture and the power to improve it. The city really can't do much about the scarcity of breath-taking views.

Specifically, Skelly prefers the view from the bayou level. He leads a regular group ride that's more of a randonnee exploring Houston's bayou trails and the surrounding neighborhoods. One of his favorite local bike routes takes him from downtown through the East End along Buffalo Bayou and down through Third Ward via the Columbia Tap Trail to Brays Bayou and out to the Ship Channel. A loop that can be done in an hour if you hurry.

Skelly refers to the Houston greenways as "a wire frame you can hang a lot of stuff from," citing the piecemeal progress that's been made in the city's overall bike network as greenways are connected by the city's bikeways. An example being the Austin bikeway that links the Buffalo Bayou Greenway with Hermann Park and the Brays Bayou Greenway.

Several of the factors that hurt Houston's ranking the most here are those that could be considered natural disadvantages, such as climate—it has a lot of hot days and it rains a lot—and Bike Score, which is based on four equally weighted components, one of which is hills. Unless you're counting overpasses, Houston has no hills, which isn't necessarily a bad thing.

"In a flat city where we've got ideal cycling weather eight months of the year, riding a bike should be the most convenient way for anyone, not just experienced riders, to get around," says Cutrufo. "And most remarkably, nobody who is taken seriously in Houston disagrees with that."

I want to pause here for a moment to clarify something. The marketing teams at Lawnstarter and Wallethub, along with SmartAsset and other companies, smartly have used public data from the census bureau and other federal agencies, as well as sundry special-interest organizations, to create an endless stream of content ranking cities for everything under the sun, from the best for celebrating holidays, everyday safety and staycationing to the most relaxed and best for getting stoned. I say smartly because, of course, I'm mentioning them here and have done so before.

When it comes to the conduciveness of Houston's climate and weather, it all depends on the activity. For biking, it seems, it's not so great. Lawnstarter ranks the city's climate 194 out of 200. However, when it comes to gardening in the nude, Houston's heat is, evidently, more of an asset. Its No. 28 ranking for "weather" helped the city land at No. 30 overall among the "best cities for naked gardening." Austin, by the way, was No. 2 overall. Not surprisingly, no region in the country can compete with the Sun Belt in the category of weather in the context of naked gardening. The top 16 cities are all in the Sun Belt, seven in Arizona alone. Laredo was No. 4.

When it comes to best cities for urban gardening, Houston doesn't rank as highly, showing up way down at No. 83. (Lawnstarter used different methodologies to determine the results of cities best suited for naked versus urban gardening, two lists released nine days apart in April. "Gardening environment," "profit potential" and "social environment" rankings were factors considered in the latter. If you're considering a move but want to know how cities stack up for "naked urban gardening" before you settle on a destination, you'll have to keep waiting.) 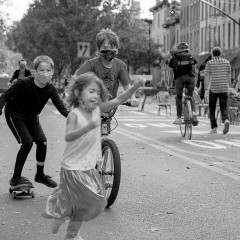 Unflashy but effective ways to slow traffic and save lives
INSIGHTS :  Jan. 7, 2021

Pedestrians and bicyclists accounted for 38% of all roadway deaths in Houston in 2019 — a 3% increase from 2018. Overall, 647 people were killed in fatal crashes in the Houston area in 2019, according to NHTSA data released in December. Prioritizing speed on local roads is the dangerous status quo in the U.S., but many cities are taking action to try and make safety the priority.