Together, the bold cities of the I-10 corridor can take on the urgent issues of our time

The coronavirus pandemic has laid bare many of the disparities deeply rooted in our society. Given the technology available to us, such as data-gathering technologies, visualization systems and instantaneous communication, our ability to anticipate the fu

The coronavirus pandemic has laid bare many of the disparities deeply rooted in our society. Given the technology available to us, such as data-gathering technologies, visualization systems and instantaneous communication, our ability to anticipate the future is unprecedented. Combining those resources with collective action, we can confront the issues we’re facing today and prepare for the challenging events of tomorrow.

As regular readers of the Urban Edge will know, the Ten Across Water Summit was to be staged in Houston in March of this year in partnership with our colleagues at the Kinder Institute. Of course, COVID-19 intervened and the Summit was postponed in the interest of health and safety. Our interest in Houston is undiminished. Stay tuned.

For those who are unfamiliar with the Ten Across initiative, a reminder of the founding premise may be in order:

Positioned on the frontlines of demographic, social, economic and climate change, the U.S. Interstate 10 corridor presents the challenges of the 21st century in their highest relief. The Ten Across initiative recommends this unique transect as an observatory for the nation as a whole, one trained on the critical trendlines and our capacity to respond to a knowable future.

This was the logic behind Ten Across when it was launched several years ago.

On Thursday, the Kinder Institute released “The Urban Sun Belt: An Overview,” a report that explores the interconnected opportunities and challenges facing the 22 metropolitan statistical areas in the Sun Belt with a population of 1 million people or more. Between 2010 and 2016, almost half of all population growth in the U.S. happened in these 22 large, young and quickly growing metro areas.

With the arrival of COVID-19 and the resulting reverberations across the 2,400-mile I-10 corridor, we are further convinced of the utility of this concept and the singular nature of this geography.

Consider, for example, the array of virus-related disruptions currently taking place across the I-10 corridor, many with national and global implications:

► In March, the Port of Los Angeles/Long Beach, responsible for the import of roughly 40% of our country’s containerized goods, experienced a 30% decline in trade due to the combination of tariff conflicts and production shutdowns in China triggered by the virus. The head of the Port of Long Beach described the decline as “a crisis of historic proportions.”

► El Paso/Ciudad Juarez, the go-to public stage for media coverage of federal immigration policy, is feeling the socioeconomic effects of the shutdown nominally intended to stop the coronavirus’s spread. Not only are those effects felt deeply by El Paso’s binational population, they impact the food production industries that line the I-10 corridor and rely primarily on immigrant labor to help feed the nation.

► In April, a startling photo of hundreds of cars lined up at a San Antonio food bank made the front page of newspapers across the country. The image is emblematic of the preexisting inequities found throughout the nation, which were abruptly and tellingly illuminated within only weeks of Bexar County’s Stay Home Work Safe order.

► New Orleans is home to one-of-a-kind cultural offerings from a vulnerable urban population that forms the backbone of its tourism industry. The city found itself at the center of national debates over disease transmission and the local cost/benefit of an economic shutdown.

► The response to the pandemic produced iconic images of beaches opening early in Jacksonville at the recommendation of the mayor. Aside from the immediate issues, this further exposed the confusion of governmental authority and responsibility at the federal, state and local levels — a complication that inhibits the ability to address other macro issues on the horizon.

► Last, but certainly not least, few cities around the globe have been more impacted financially by the pandemic than Houston. With its fortunes inextricably linked to those of the oil industry, the city has been set back by plummeting demand, international trade disputes and the hard tapping of the brakes in the formerly thriving Permian Basin, recently declared the world’s top-producing oilfield.

The sudden turn of events caused by the pandemic has exposed what we intuitively knew: the massive systems upon which our society depends are thoroughly interconnected and — given the confidence we place in them — remarkably fragile. They also are ill-equipped to address issues not constrained by geographic, political or sector boundaries.

We are all in this together

One of the frequent refrains heard of late is that “we are all in this together.” Yet, we have seen how various life circumstances have made the experience of the pandemic radically different for many Americans, further deepening the economic fault lines previously masked by the nation’s economic growth.

The “in it together” logic, however, is applicable to the Ten Across initiative and the tens of millions of people who reside “on the same street.” Many of the cities and communities within the I-10 corridor share a DNA made up of 20th-century technologies: the highway system, the automobile, production housing and air conditioning, to name a few.

Rapid growth, demographic change, low-density profiles and a need for economic diversification are shared characteristics across I-10 cities, presenting opportunities for the productive exchange of ideas and options. This may be especially true at a time when many cities have been dealt two corresponding blows: a pandemic-induced revenue downturn that has turned budgets inside out just as demand for essential public services spikes.

On the brighter side, Ten Across cities like Houston, Phoenix, Jacksonville and Los Angeles — often derided for their consumptive land-use patterns — are being considered by many who are concerned with the density/distancing equation as a result of the coronavirus pandemic and looking to make a move. While it’s not yet known how a new wave of migration to the Sun Belt region might change housing, transportation and work patterns, another cycle of profound transformation may be on the horizon for a region accustomed to rapid change.

The geography of Ten Across, from Los Angeles to Jacksonville, has, in the early stages of the 21st century, been the site of disruption and displacement (think Hurricanes Katrina and Harvey, wildfires, immigration policy, etc.) These cannot be characterized as surprising events or Black Swans.

As the study of past pandemics and current science reminds us, our capacity to anticipate challenging events of this kind is unprecedented. Thanks to contemporary data-gathering technologies, visualization systems and instantaneous communication, no civilization in history has enjoyed more access to the future. Unfortunately, our societal ability to respond to such knowledge in a proactive manner has not evolved at the same pace. Thus, Ten Across.

We imagine Ten Across as a laboratory dedicated to the study of leading indicators of change, like those too easily revealed by COVID-19. Ten Across is precisely situated and scaled to be commensurate with the urgent issues of our time. The trendlines associated with expanding inequities, resource depletion and the impacts of climate change are readily visible while driving the I-10 corridor, and visceral to those who live along it. But bending these trajectories is possible given our predictive tools and our potential for motivated action — especially if pursued in concert with similarly motivated neighbors on the same street.

Wellington Reiter is the founder of Ten Across and executive director of the University City Exchange at Arizona State University. 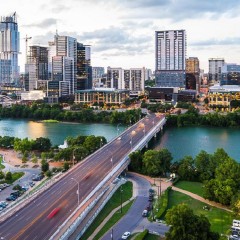