It seems like all of California is moving to Texas. Is that true?

In the past, the influx of Californians to Texas has fluctuated from year to year. However, since 2018, the West Coast migration has remained high. Why is that? (Hint: It’s not oil prices.)

In the past, the influx of Californians to Texas has fluctuated from year to year. However, since 2018, the West Coast migration has remained high. Why is that? (Hint: It’s not oil prices.)

Texas is clearly having a moment — especially in comparison to California. During the pandemic, California has been shut down while Texas has remained partly open. Several major California companies — among them Oracle, Hewlett Packard Enterprise (which has Houston roots as Compaq), CBRE and Charles Schwab — have all moved to Texas from California. Texas’ population continues to grow, while California’s population growth has stopped for the first time in almost two centuries. And, in the popular imagination at least, everyone in California is moving to Texas — drawn by low taxes, cheap houses and a low-regulation lifestyle.

But is this last point really true? Is everybody moving from California to Texas?

Well, no. California still has 40 million residents, compared to Texas’ 30 million. (The two states have way more people than any other state.) It is true that population flow from California to Texas has picked up considerably in the past two years. But, there are a couple of subtle wrinkles underneath that statistic that are necessary to fully understand what’s going on.

As Figure 1 shows — based on state-to-state migration figures from the U.S. Census Bureau — net migration from California to Texas in 2018 and 2019 was between 45,000 and 50,000 people per year. (For perspective, that’s about one-tenth of 1% of California’s population.) That has picked up a lot over previous years. For example, in 2017 — the year of Hurricane Harvey — the net migration was only 22,000. So, it’s doubled since then, though 2017 was, as the chart shows, an unusually low year. 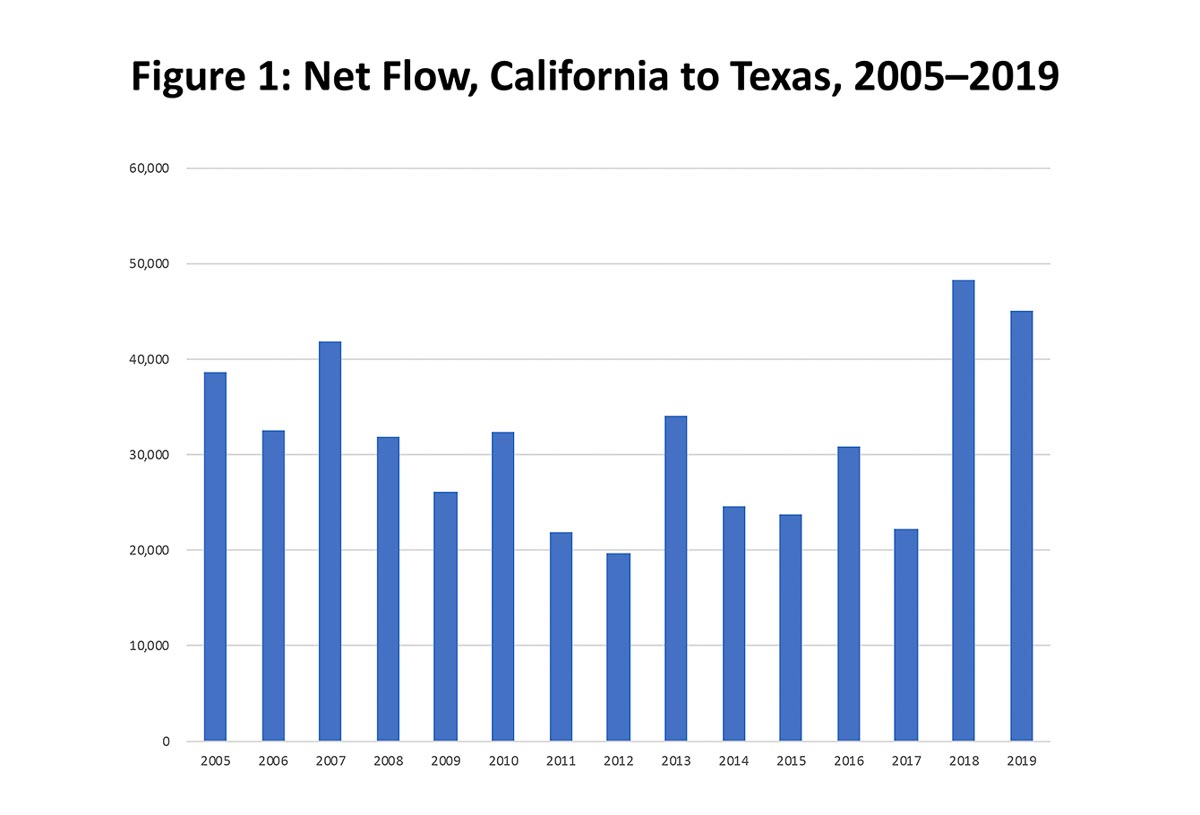 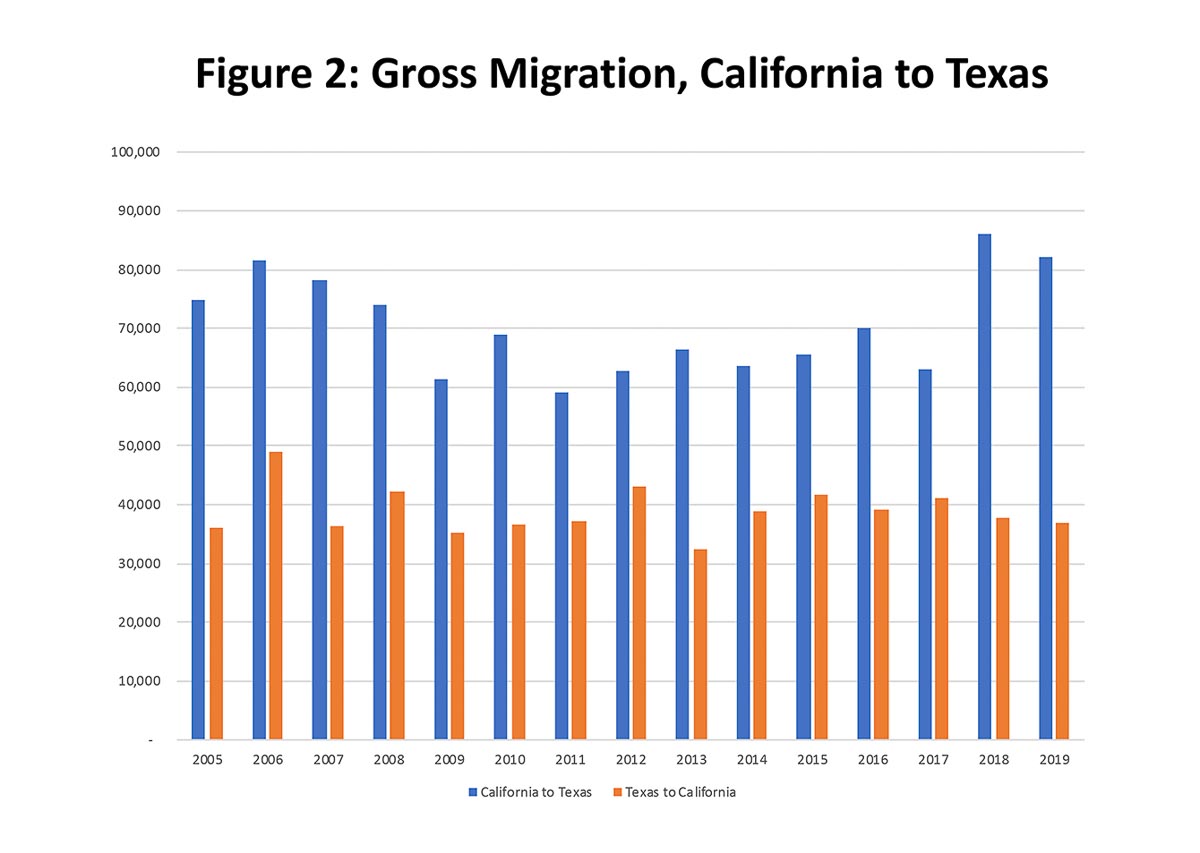 Between 35,000 and 40,000 Texans move to California every year no matter what. It was a little lower during the Great Recession of 2007-2010, but it didn’t change during the drop in oil prices that began in late 2014. In other words, the Texan migration to California is steady and doesn’t seem to be driven by larger economic forces. Whether that’s Texans going to the University of California or surfers or aspiring actors, we don’t know. But the flow is steady and predictable.

The movement in the other direction — California to Texas — looks pretty different. It ebbs and flows. Even during the last recession, it wasn’t consistent, fluctuating up and down pretty considerably. And in the past two years, it has shot up to a level not seen since 2006. In 2018 and 2019, a little over 80,000 Californians moved to Texas. (Again, for perspective, that’s about two-tenths of 1% of California’s population.)

But why is this really happening? Admittedly, California has had a rough couple of years, but the fluctuation is considerable, and it doesn’t seem to be related to the price of oil (i.e., economic opportunity in Texas). If oil prices were a factor, we would have seen a big dip in 2014-2016. (Instead, during that time, California migration to Texas went up.)

As it turns out, the answer is simple. The driving force is not a pull into Texas but a push out of California: home prices.

Take a look at Figure 3, which compares the California migration flow to Texas (the blue bars) with the median single-family home price in California (the orange line). Correlation isn’t causation, as the statisticians like to warn us, but the trend is pretty clear. Migration from California to Texas lags behind the trend in home prices in California by a year or two. 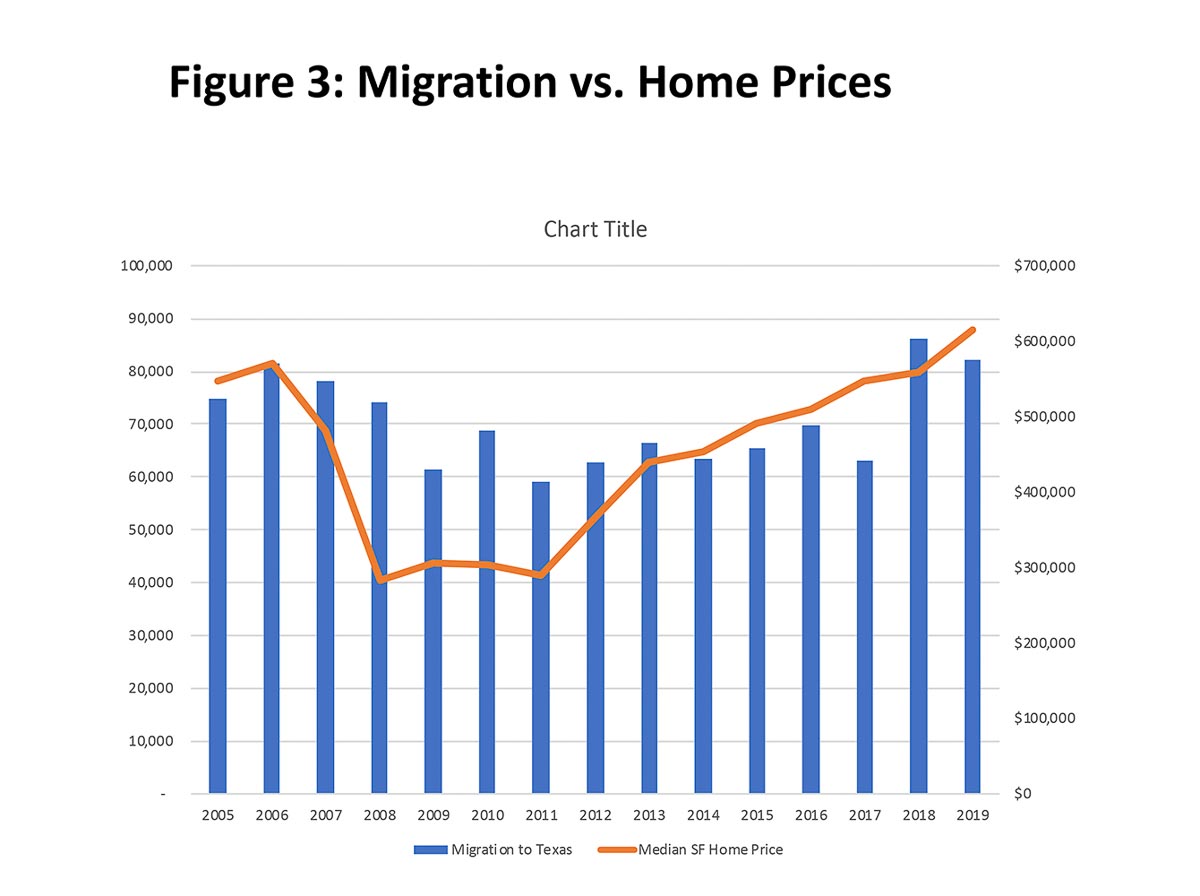 California home prices peaked in 2006, at about $570,000. Heavy migration from California to Texas continued until 2008. But by that time — when California was heavily hit by the subprime mortgage crisis — the median California home price had dropped in half, to about $280,000. Migration to Texas started dropping the following year. Californians stayed home when they could afford to buy a house.

The Census Bureau has not yet released the state-by-state migration numbers for 2020, but it’s a solid bet that migration to Texas will stay high and might even increase. That’s because of two seemingly conflicting pandemic-induced trends we have seen in expensive real estate markets on both coasts: a rush to buy bigger homes has driven prices up even higher than before (the median home price is currently around $700,000) and a desire to leave expensive, crowded markets, both of which have led to a flight to other places.

Whether this trend will continue in the long run is unknown. It’s entirely possible that the pandemic has created a whole new pattern we’ve not seen before — a permanent increase in the flow of Californians to Texas. The changes in quality of life in the two states may have tipped the balance to Texas at last.

But I think it’s more likely that when California home prices come back down to earth, so too will migration to Texas.

As Figure 3 shows, California home prices don’t just keep going up and up. Having been a California homeowner for 34 years — I still own my house there — I have seen a lot of ups and downs. Not only did the market dip during the Great Recession following a huge run-up, it was flat during the entire 1990s after a big increase in prices in the late ‘80s. Many Californians love Texas. But more of them love California, and they generally would like to stay there — if they can afford it.