Several hours after rescinding a nearly 40-hour boil water notice, Mayor Sylvester Turner had a timely example for why he thinks there is a clear need for infrastructure investment in Houston and throughout Texas.

He discussed goals for his upcoming eighth and final year as mayor and other topics during a question-and-answer session with Sewell Chan, editor in chief of The Texas Tribune, on Tuesday at the Wortham Theater Center.

“We need more enhancements on our infrastructure to sustain our growth, in terms of population and what's happening from an economic point of view,” Turner said. “For example within our water systems, infrastructure is critically important. We need to simply take a look and see what exactly was the cause for that failure, and whether or not the infrastructure needs to be enhanced. The reality is if we don't enhance infrastructure, there will be even more failures.”

Turner pointed to the passage of federal legislation, including the Creating Helpful Incentives to Produce Semiconductors and Science (CHIPS) Act, the Inflation Reduction Act and the Infrastructure Investment and Jobs Act, as measures that could benefit Houston. Voters also recently approved $478 million in bonds for public safety, parks and city facilities; another $900 million in county bonds will support other infrastructure efforts.

"We just need a lot more dollars flowing into the city and the county for infrastructure,” Turner said. “When you combine those three, then there are more dollars that are coming into our city to address infrastructure, and that will be very helpful."

In the wide-ranging interview, Turner declined to offer any endorsements in the upcoming mayoral election and left open the possibility of another run at public office in his own future. The Kinder Institute will honor Turner at its 2023 Annual Luncheon in May.

He also weighed in on the upcoming Texas legislative session and the issue of tax dollars going toward charter schools and voucher programs. Turner said this would be harmful to the public education system where the majority of students are enrolled.

“Nearly 5,000,000 kids in the state of Texas, if not more, are what I call on the ‘cruise ship.’ But the state is not fully funding those kids on the cruise ship,” Turner said. “Instead of fully funding the 5,000,000 kids, they're going to take some of the money that they have and put it on these speedboats. You’re now focusing on a small subset. But what about the kids coming from communities that have been underserved and under-resourced?”

Despite having an administration beset by crises—starting with a $8 billion pension shortfall, multiple devastating flooding events and the pandemic—the mayor has also had an ambitious agenda, adopting a Climate Action Plan, the Resilient Houston Plan, Vision Zero and a police reform plan, among others. But making more progress on his Complete Communities equitable development plan was top of mind on Tuesday.

“I want us to finish with a bang, and not a whimper. We have 13 months to get a lot of stuff done. I’ve got 22 parks that we're working to revitalize across this city,” Turner said. “The Almeda Multi-Service Center and the Sunnyside Multi-Service Center — we’ll cut the ribbon on that.”

Chan cited the 2022 Kinder Houston Area Survey, where only half of respondents believed they would be “better off” in the coming years, marking the lowest level recorded and a 15% decrease from the peak of 65% in 2017. While acknowledging that challenges remain for Houstonians like the high cost of living, Turner expressed optimism for the city’s future and reflected on some accomplishments.

“We’ve faced several disasters in the last seven years, but we’ve been resilient,” Turner said. “A lot of good, positive things have happened. I think it's important to focus on the good and to recognize that tomorrow will be better.” 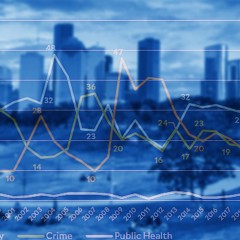 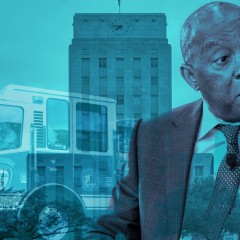 The city’s strong mayor has the power to set the City Council agenda, which means nothing can go before the council without the mayor’s OK. A coalition led by the fire union is trying to rein in that strength.

The annual luncheon brings together hundreds of business, nonprofit and community leaders to learn about the leading issues facing our community and country.