Following a presentation on what the I-45 freeway expansion means for Houston, city planner and urban designer Jeff Speck talks with Kinder Institute Director Bill Fulton.

Copies of Jeff Speck's books, "Walkable City: How Downtown Can Save America, One Step at a Time" and “Walkable City Rules: 101 Steps to Making Better Places,” will be sold on-site. A book signing will follow the event.

Jeff Speck is a city planner and urban designer who advocates internationally for more walkable cities. As director of design at the National Endowment for the Arts from 2003 through 2007, he presided over the Mayors' Institute on City Design and created the Governors' Institute on Community Design. Prior to his federal appointment, Speck spent ten years as director of town planning at DPZ & Co., the principal firm behind the New Urbanism movement. Since 2007, he has led Speck & Associates, a boutique planning firm that specializes in making American downtowns thrive.

With Andres Duany and Elizabeth Plater-Zyberk, Speck is the co-author of “The Smart-Growth Manual” and the modern classic “Suburban Nation,” which the Wall Street Journal calls "the urbanist's bible.” His latest book, “Walkable City” – which the Christian Science Monitor calls “timely and important, a delightful, insightful, irreverent work” – was the best-selling city-planning book of 2013-16. His TED talks and YouTube videos have been viewed more than 3 million times.

This program is generously underwritten by Laura and Tom Bacon and eligible for 1.5 CM credits from the American Planning Association. 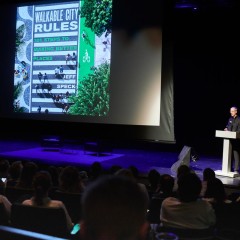 City planner and author Jeff Speck sparked Houstonians to join actions aimed at the current I-45 expansion plan by TxDOT. 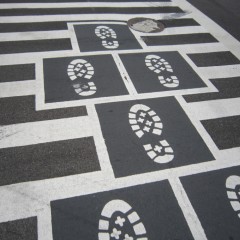 In his latest book, Walkable City Rules, Speck makes it easy for cities to improve access and walkability.