On the surface, Houston’s proposed city council maps barely budge, but the ground is shifting

With 2020 Census data in hand, Houston is moving forward with city council redistricting. The first proposed map was unveiled last week ahead of a public comment phase. For the most part, not much changes in terms of actual boundaries, but the underlying

With 2020 Census data in hand, Houston is moving forward with city council redistricting. The first proposed map was unveiled last week ahead of a public comment phase. For the most part, not much changes in terms of actual boundaries, but the underlying demographics of Houston’s population shifted considerably in the past 10 years.

The city will hold three public hearings starting July 13 before finalizing the plan for council approval. The adopted map will take effect for the 2023 election cycle. To help show what could change if this proposed map is adopted, we overlaid each version (see below) and crunched some numbers to get an idea of how the demographics of each new district compared to their previous versions.

With each new decennial census, the city is obligated to review its council district maps — not unlike how the state and federal representative districts were earlier this year. In the process, the city must ensure that each district:

This spring, city officials in each district held public forums to let constituents know that the maps could be changing and to get their input before any new boundaries were drafted.

“Our engagement strategy was to hear from the public about what they believed was important without drawing any maps,” planning director Margaret Wallace Brown said. “Before anyone on our team had a pencil in their hand, we wanted to hear what was important. We took that information and went to work on the new maps.”

What came through most clearly, it seems, was that people generally like where they are and are happy with their council person. Some desires, such as incorporating more of the Heights area into one district, were simply not possible to accommodate, Brown said. District E, the district with the most head-scratching shape in the city — somehow connecting Kingwood and Clear Lake — remains intact.

Once you start making larger changes, there tends to be a domino effect as you try to balance out the other populations. So it’s no surprise then, that the proposed maps offer minimal changes. In fact, only an estimated 3% of the population would be affected by the changes, according to the Houston Chronicle.

There are some notable moves: Rice University would move into District D and the historic Freedman’s Town would join District H. Both are currently in District C. You can see some of these changes in this rough before-and-after comparison using boundaries from the city's PDF maps (we didn't get GIS files on hand in time for this post).

“These changes are by no means final,” Brown said. Officials are counting on hearing key insights from residents from the public hearings over the next three weeks. “When we did this in 2011, by the end of public comment we had some really good recommendations that resulted in a better map. So this is critical.”

However, even if these minor changes stick, the demographic ground of Houston is shifting. Consider these findings about the district makeup under the new map proposal compared to the current maps, which were generated based on the 2010 Census.

Keep in mind, the above figures do not account for the estimated citizen voting age population (CVAP), which could represent slightly different makeup in terms of eligible voters. That there are more plurality districts under the new proposal makes sense; after all, Houston is a majority-minority city (where racial or ethnic minorities make up a majority of the population).

All that said, the city itself remains as segregated as ever. The question is, will these boundaries result in a more inclusive city government?

Despite the demographic strength of the Hispanic community, Houston has struggled with electing proportional numbers of Hispanics to city council, which has prompted a legal effort to push for the abolition of at-large seats. Doing so would result in 16 single-member districts with much smaller constituencies, potentially increasing the opportunity for additional candidates of color to be elected. If that happens, Houston would also join the ranks of most big cities in not having at-large positions (including its Texas peers: Dallas, Austin and San Antonio).

But until the at-large question is resolved, which could take years, Houston will keep its 11 districts. If you want to weigh in on this version of the boundaries, now is the time to speak up. Find the public comment schedule and other options for providing feedback at www.letstalkhouston.org/redistricting. 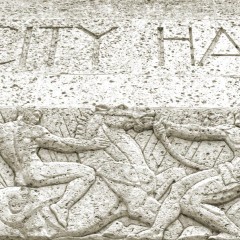