On Aug. 3, the Centers for Disease Control and Prevention issued a temporary ban on evictions in counties with heightened levels of COVID-19 infections. That includes Harris County and the eight other counties in the Houston metro area, as well as most counties in the nation.

With the spread of the Delta variant, new cases in Harris County have been surging since mid-July. According to the New York Times’ analysis of data on coronavirus cases and testing data by county, unvaccinated people in Harris, Fort Bend, Austin, Waller and Liberty counties are at “very high risk,” while in Brazoria, Montgomery, Galveston and Chambers counties, the risk is “extremely high.”

It’s not known for certain how many Houston-area households are at risk of being evicted; those projections can vary depending on the analysis and the criteria used to gauge housing insecurity. It could be between 109,000 and almost 172,000, according to the Census Bureau’s Household Pulse Survey, one of the most-commonly cited indicators.

Of those not caught up on rent in the Houston area, about two-thirds were Black (25%) or Hispanic (41%) households. In addition, 63% of the households that were behind on rent said they were likely to be evicted in the next two months.

The vast majority — 77% — were households making less than $50,000 a year. As Kinder Institute researchers showed in the latest “State of Housing” report, most renters in Harris County who make less than $50,000 a year are cost-burdened, meaning they spend more than 30% of their income on housing. Many, especially those making less than $25,000 annually, are severely cost-burdened, with rent eating up more than half of their income. They also found that the cost burden is worsening for low-income and middle-income renters here.

In Harris County, 45% of residents are renters, and three-quarters of them are people of color. The median household income of renter households is $42,257, almost $20,000 less than Harris County homeowners.

The CDC’s two-month moratorium doesn’t mean that back rent won’t have to be paid once it ends; it only means millions of renters nationwide who aren’t able to pay their rent will be shielded from eviction until Oct. 3 when the ban is set to expire. Back rent owed by tenants in the U.S. is estimated to be in the tens of billions, PolitiFact has reported. For those struggling to cover the cost of housing, there is still some funding available from the federal government.

Aid for renters during COVID-19

The Emergency Rental Assistance program was established in December with $25 billion from the Consolidated Appropriations Act; and in March, another $21.55 billion was added from the American Rescue Plan Act. States have until the end of 2025 to distribute the funds, but the residents most in need of aid need it now. Distribution has been slower in some places than others. By the end of June, the Treasury Department reported only about $3 billion of the $46.5 billion had been spent on rent, utilities and arrears. Over $1.5 billion of that was distributed in June alone, more than the total for the first five months of the year.

Locally, the disbursement process has gone smoother than in many other cities and counties. Texas received about $2 billion from the federal government in February, as part of the first phase of the Emergency Rental Assistance program. Of that, $1.3 billion went to the state-run Texas Rent Relief Program, which has distributed almost $1.2 billion so far. By early July, almost $144 million had gone to residents in Houston ($70.1 million) and Harris County ($73.8 million).

The other $700 million from the first round of aid back in February went to cities and counties with populations larger than 200,000, about 40 in all. Through the Houston-Harris County Emergency Rental Assistance Program, the county and the city have distributed more than $163 million to around 43,000 families.

Where is the money going?

As of Aug. 9, some $645 million in rental and utility assistance had been dispersed to just over 105,000 households through the state-run program. A little more than $161 million of that went to roughly 27,000 households in Harris County. Over $6.1 million has gone to more than 1,100 households in the 77090 ZIP code, the most in the county. The majority-Black ZIP code is 78% renter-occupied — 59% of renters are African American.

Since mid-March of last year, when the pandemic began, there have been more than 38,000 evictions filed in Harris County — the third highest count in the nation behind New York and Phoenix, according to the Eviction Lab’s COVID-19 eviction tracker. (Eviction Lab lumps filings in Harris and Galveston counties together.) There were 653 eviction filings in Houston for the week of July 25–July 31, second in the U.S. only to New York’s 683. January Advisors reports that 474 evictions have been filed in Harris County since the latest moratorium went into effect.

There are several factors that may contribute to the large number of evictions in Harris County, including the lack of a right to counsel services for residents facing eviction, an overreliance on naturally occurring affordable housing and the fact that it only takes three-days notice for landlords to evict tenants for nonpayment of rent.

Overall, however, filings remain below historical averages in the county. That’s been the case since COVID-19 changed everything. Before that, in the first two months of 2020, Harris County eviction filings were outpacing the average number of filings for those months for 2012–2015. In July, there were 2,748 filings in Harris and Galveston counties, 46% fewer than the historical average of more than 5,000 in that month.

Like a lot of the preexisting conditions the pandemic has worsened and brought broader attention to, evictions were a problem before COVID-19. What happens when moratoriums elapse for good? Housing advocates argue long-term solutions are needed, such as expansion of the Section 8 federal housing program, which issues rent vouchers for low-income tenants. Even before the pandemic, the wait list for vouchers was long.

Kinder Institute researchers reported in the 2021 State of Housing that the county processed 64,257 eviction filings in 2019. That’s based on county data compiled by January Advisors, which also provides data to Eviction Lab. Harris County’s eviction filing rate that year was 8.8% — about one eviction filing for every 11 rental households in the county. Almost 33,000 households were evicted, a rate of 4.5%.

A look at the areas of Harris County where evictions originated since the beginning of the year shows they’ve been concentrated in the same communities in which they were most common in 2019, before the pandemic.

Another potential problem with the Oct. 3 end date of the new eviction ban are the students who’ll be affected. School closures and remote learning have significantly disrupted the lives of many students — socially, emotionally and academically — especially the most socioeconomically vulnerable. And the long-range impacts of the pandemic on academic outcomes are yet to be seen. An eviction less than a month after schools open in the coming weeks would worsen the setbacks already experienced at a disproportionate level by students from lower-income households.

Research shows that households with children are at a greater risk of eviction than those without. Nearly one quarter (24%) of the Houston-area households behind on rent are home to children under 18, data from the latest Household Pulse Survey shows.

That’s in line with results from the Gulf Coast Coronavirus (COVID-19) Community Impact Survey that showed only a third of Houston-area households with children had enough savings to cover a month of expenses at the beginning of the pandemic. And as the Kinder Houston Area Survey has shown, more than a third of Harris County residents are unable to cover an emergency cost of $400. All of which helps paint a picture of the financial precarity many residents face.

Daniel Potter of the Houston Education Research Consortium (HERC) points out that even seemingly small moves, such as moving down the street a mile or so, can often lead to students finding themselves in a different school attendance zone or even a different school district.

In June, Evictions Lab published a research brief based on analysis of eviction filings across the Houston Independent School District in 2017 and 2018. Using data from HERC that links HISD school zones to Census Block Groups, the researchers were able to layer data from the American Community Survey over Harris County eviction court records on filings. Their analysis showed several “hot spots” among the district’s 163 elementary school zones in which students may have a high risk of eviction, also known as forced mobility.

The table below shows the elementary school zones with the most filings and the highest eviction filing rates over the two-year period. It also lists the neighborhoods in which the schools are located.

HERC researchers worked with 10 Houston-area school districts on a multiyear study of student mobility to better understand which students change schools and the impacts that has on educational outcomes. They found that student mobility is patterned in the Houston area, and that it’s possible to predict both who will move and where they will move.

They also found that changing schools carries consequences for students’ learning. For mobile students in the Houston area, Potter says, there’s often a decline in their performance on state assessments; and for older students, there’s an increased risk of grade retention and high school dropout.

“And this is just looking at mobility, in general, not taking into consideration the additional stress, strain and trauma that could be associated with forced relocation resulting from evictions,” says Potter, HERC’s associate director of regional research. “Extending the moratorium on evictions, while not a long-term solution to the inequities in housing that plague many families and neighborhoods in Houston, promotes stability in students’ housing and schooling, and that is good for their short- and long-term educational outcomes.” 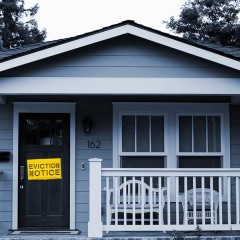