Update: Evictions cost Harris County over $240 million a year — that was before COVID-19

Researchers at the Kinder Institute estimated the annual cost of evictions to Harris County, where more people are evicted each year than anywhere in the U.S., with the exception of New York. The increasing costs of evictions eat up funding that could go

The United States is facing a major wave of evictions driven by the economic impacts of the COVID-19 outbreak. The potential disruption is so great that the Centers for Disease Control and Prevention issued a federal moratorium on evictions, arguing that putting millions of households out of their homes would deepen the public health crisis.

Evictions have the most direct impact on the households being evicted, but collectively, evictions place an immense burden on the public and nonprofit sector. Locally, Houston and Harris County shelters, medical providers, child welfare services and criminal justice agencies incur a range of costs because of evictions. With COVID-19’s economic crisis hitting local budgets hard, these agencies are being forced to reckon with ballooning demands at a time when their revenues are most threatened.

The potential fiscal impacts of evictions are staggering. Researchers at the Kinder Institute for Urban Research estimate that in Harris County, the public and private sectors spend $241.4 million per year* addressing the county’s uniquely large mass-eviction crisis. That fiscal impact takes into account only the costs that are readily enumerated — the most prominent downstream externalities of evictions, which include costs for shelter and the medical care and criminal justice expenses that stem directly from eviction. In reality, there are other hidden costs borne by the public, private and nonprofit sectors.

Evictions take a social as well as financial toll

Eviction isn’t just a tenant or landlord problem; and the current eviction crisis is not only a moral issue. Rather, mass eviction is a social and fiscal problem for our community as well. 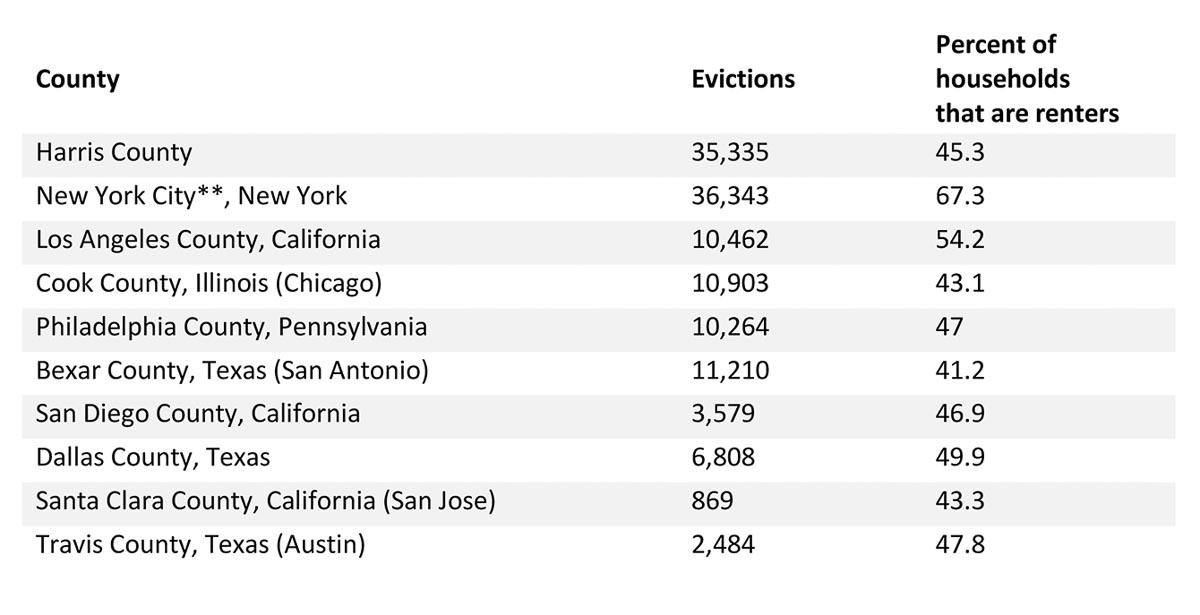 Houston is not an unusually poor major city, nor does Harris County have an unusually high share of renters (as seen in Table 1, it’s somewhere around the median for the top 10). Therefore, the eviction crisis seems endemic to discrete policies and legal practices within the state and region. But there are ways to address these challenges. Small, inexpensive policies, such as free legal assistance in eviction court, benefit not only the tenant but the bottom line for Harris County’s public coffers, shelters and charity medical providers.

The cost of evictions could be underestimated

The issue is even more pressing because the $241.4 million estimate may be low. That number assumes 35,335 evictions each year in Harris County, per Justice of the Peace records. As Jeff Reichman of January Advisors illustrates, 35,335 certainly underestimates the total disruptive moves and displacements that follow an eviction filing. A certain number of tenants, upon being cited for an eviction filing, will just leave quickly — particularly households with undocumented or non-English-speaking members, who will choose to avoid any dealings with the legal system for fear of reprisal. Such disruptive moves are not included within the 35,335 evictions in Harris County. If we assume that 25% of filings with unknown outcomes represent disruptive displacements, then the annual cost of local evictions increases to $259.6 million.

Kinder staff members produced these estimates using the University of Arizona’s Institute for Justice (i4J) Eviction Cost Calculator. i4J staff, along with representatives Stout, Rissius, and Ross LLC, a law firm that consults with municipalities nationwide on eviction issues, helped guide our search for data that we added to the Eviction Cost Calculator (see methodology section at end of this document). i4J staff developed this tool not only to enumerate the broader social and fiscal impact of eviction, but also to demonstrate how mass evictions can snowball into unsustainable costs that put further strain on already under-funded and overburdened community resources.

For example, if a family is evicted, they must find a place to sleep, usually at an emergency shelter or a family member’s home. Shelters and loved ones must feed, clothe and provide a place for people to sleep. That costs money, roughly $75 per person per night. Those experiencing homelessness use the hospital at a higher rate, and almost certainly don’t have insurance or the means to pay upfront. That costs money, about $2,000 per visit that usually is swallowed by medical providers. Families without homes are at a much higher risk of domestic abuse and crime, which leads to more domestic violence, more officer calls to the scene, more juvenile detention cases, and more stays in the county jail. All of which costs money. The fiscal and moral costs compound upon each other. This perpetuates a downward spiral for a lot of those who are on the brink — many of whom are people of color — and who must raise their children in uncertain, frightening circumstances. It also taxes services already stressed by COVID-19.

While this memo contains more details about the calculator’s methodology, the calculator’s cost inputs rely upon local and national studies. For example, i4J staff members, citing recent studies from social service providers, estimate that 25% of evicted households use emergency shelter services. According to Harris County shelter advocates, the average person stays for 63 days at a cost of $75 per night. As landlords evicted 35,335 households last year, and the average Harris County household is 2.88 people, we can calculate that 101,765 Harris County residents will be evicted — nearly equaling the entire populations of incorporated Sugar Land or The Woodlands, or a quarter of the population of the Inner Loop. Of that figure, we estimate that 25,441 people (or 25% of 101,765) will need to stay at shelters an average of 63 nights, representing a cost of $120 million per year for emergency shelter services alone. Those 25,441 evicted residents exceed the current shelter capacity in Harris County, meaning that the cost is borne not only by shelter service providers but also by the friends and family who take in loved ones on short notice.

But there are far more costs than just shelter. People without homes use emergency medical services at a greater rate, and very rarely can afford to pay for it. Local sources estimate 18% of people experiencing homelessness will use emergency-room services, and on average use them four times a year at a cost of around $2,000 per visit. These costs are usually absorbed by the hospital system. Charity clinics bear a similar cost per visit.

Children without stable homes are also much more likely to be truant or commit juvenile crimes: residential supervision of a juvenile costs $51,053 per year per juvenile, and court and intake costs are $2,049 per offense, according to a recent study.

To help tackle Houston’s eviction crisis, leaders from Harris County and the City of Houston formed the Housing Stability Task Force in June. The Kinder Institute has provided technical assistance for the task force, which has a three-part mandate: provide recommendations to help prevent evictions, mitigate the impacts of COVID-19 and the subsequent economic/political crisis on tenants and landlords, and stabilize households for the sake of public health. However, the current city administration has faced criticism for not implementing the recommendations of its housing task force. Members of the task force, which includes both tenant advocates and rental industry representatives, jointly recommended an eviction moratorium. The CDC’s recent national moratorium on evictions has many exceptions but also represents a positive development. Such cooperation will continue to be necessary to help address these evictions’ collective social and fiscal impact.

In addressing the increasing costs of evictions, Harris County taxing authorities and nonprofits are forced to divert funds away from improving the county’s public health, transportation, public safety and education infrastructure. Perhaps because of this, anti-eviction investments have a very high rate of return. A cost-benefit analysis in Baltimore estimated that for every $1 of subsidy put toward tenant legal protection in eviction cases, there are $3 in cost savings. A program in Massachusetts showed that for every $2,000 in eviction-prevention subsidies, landlords and housing authorities save more than $16,000 in eviction court and processing costs alone (not counting shelter and medical costs like those included in our calculations). Other states have used direct landlord and tenant subsidies to offset the costs of non-paying tenants.

In sum, this cost of eviction calculator helps illustrate that eviction is not necessarily an individual tenant or individual landlord issue, but a social issue that leads to Harris County carrying a heavy fiscal burden. The task force should explore low-cost, high-reward policies such as legal protection, cost subsidies and extended moratoria, among other options.

In this memo, we detail our estimates, assumptions and calculations. We also enumerate each broad statistical category, our own estimate and its source. We attempted in all cases to acquire local numbers, which was not always possible. In these cases, we used cost estimates from other major cities.

There are certain qualifiers to our cost estimate in this blog post. First, the estimate assumes a static universe wherein, for example, averages apply to the entire population. The calculator reaches its final sum using static estimates extrapolated from averages. The data also do not account for important variations. One of many examples is that we estimate children per household (1.9) to compute the cost of juvenile delinquency. However, children younger than teenagers are rarely processed in the criminal justice system. Additionally, shelter services vary greatly, whether or not the household seeking shelter is a family with children, or a single person. Also, we use average household population (2.88) to apply to evicted households, which may be a different size than the average Harris County household (either larger or smaller).

Thanks to our partners at the Coalition for the Homeless, the Harris County Youth Collective, the Patient Care Intervention Center and January Advisors for helping to identify inputs for this calculator.

Updated Oct. 5, 2020: In October 2020, the child delinquency costs were updated in the base and base-plus models. The outputs now attribute a percent of sheltered homeless children committing an act of violence — 44% as cited in the U.S. Department of Health and Human Services studies and used in the i4J model — to the median annual juvenile probation cost figure ($46,813). This adjustment ensures the median annual juvenile probation cost is not attributed to all sheltered homeless children ages 10–17. 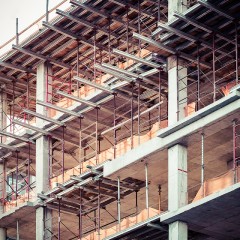 This workshop shares findings from the Kinder Institute's 2020 State of Housing report. Panelists also discuss the current housing situation in Houston during COVID-19