Thanks to Justice40, Port Houston investments will bring long overdue relief to Pleasantville

My wife and I couldn’t believe it. When we retired and moved back home to Houston’s historically Black Pleasantville, just east of downtown, we smelled the unmistakable odor of the petrochemical plants and saw the close-knit community where we’d grown up surrounded by noisy freeways. The apartments where friends of mine lived had been replaced by warehouses swarming with old diesel trucks.

We still see vacant property that could have been developed into new city parks, small businesses or affordable homes for our seniors sitting there, waiting until the Army Corps of Engineers is ready to dump the toxic muck their dredging machines will scoop up from the Houston Ship Channel to make it deeper.

How did this happen? It hurt us to realize our quality of life, our very air, had been sacrificed for Houston’s economic growth — and no one seemed to be doing anything about it.

Sadly, that’s been the story as long as I can remember. The city put dumps and incinerators in our Black and Hispanic communities. The state built freeway after freeway right through them. Devalued and disregarded, our communities struggle now with illegal dumping, serious health problems from pollution and lack of access to resources to help us rebuild and recover after the damage of hurricanes.

So many nonprofits and community groups have been formed to speak up: Pleasantville’s Achieving Community Tasks Successfully is just one. But no one seemed to be listening to us — until now.

First, the Federal Highway Administration told the Texas Department of Transportation to pause another freeway expansion, which would seize and demolish thousands of homes and apartments, almost all in historically Black and Hispanic communities, so they could investigate potential civil rights violations.

Then the U.S. Department of Housing found the state’s land office had discriminated against us in the way it dispersed federal disaster recovery money. And the Department of Justice stepped in to find out whether the city is discriminating against us with the way it responds to dumping complaints. These federal actions make Houstonians like my wife and me feel that someone’s finally trying to do something for us, not to us. And there’s another lesser-known federal charge, President Joe Biden’s Justice40, we’re seeing already making a difference.

Developed in 1948, Pleasantville was one of the first planned communities in the country for Black people. Living here was a source of pride for all of us. My father, with only a second-grade education, was a longshoreman at the port, where workers could earn a decent living and own a nice home. My parents sent all five of us children to college — but not before my brother and I fudged our ages to join him loading and unloading ships when we weren’t at school.

Like Houston, though, the port was segregated. We couldn’t work with other longshoremen, and we couldn’t go to school or swim with other Houstonians. The injustice in the way Houston developed created a toxic legacy. Pleasantville was turned into one of the most polluted and unhealthiest areas to live in the entire country, the Environmental Protection Agency finds. It’s the constant pollution and noise from diesel trucks rumbling down our streets. It’s the 300,000 vehicles a day on TxDOT’s freeways. It’s the cancer-causing air toxics from the chemical plants and refineries that take advantage of the Ship Channel.

Meanwhile, Port Houston has become one of the biggest and busiest in the country, with ambitions to keep growing. In the past, that’s been at our expense. But Justice40 dictates 40% of federal infrastructure investments, which the port will need, go directly to communities like ours to confront climate change and achieve racial equity and environmental justice, so we can grow, too.

Already, as the port plans to triple capacity, Justice40 is working as intended: With other federal infrastructure money, companies like Walmart, IKEA and Maersk have been motivated to swap out aging trucks for new zero-emissions ones. The port has applied for another $120 million to improve trucking with smarter routes and cleaner rigs right now on their way to achieving net-zero emissions by 2050. What’s good for communities like Pleasantville is good for all of Houston.

Now that President Biden has signed into law the Inflation Reduction Act and its $60 billion for environmental justice and $3 billion for cleaner ports, we’re feeling even more hope that long-denied justice will come. When I was a child, my mother was a passionate civil rights activist. She used to say, “Never give up on the struggle, because the struggle won’t just give in to you.” My wife and I find ourselves following in my mother’s footsteps, so that what was taken away might be restored: the right to breathe clean air.

Cormier is a retired executive, author and activist. He serves on the board of directors with the Writers Guild of Virginia and Achieving Community Tasks Successfully in Houston. 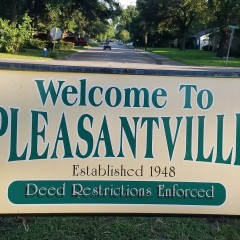