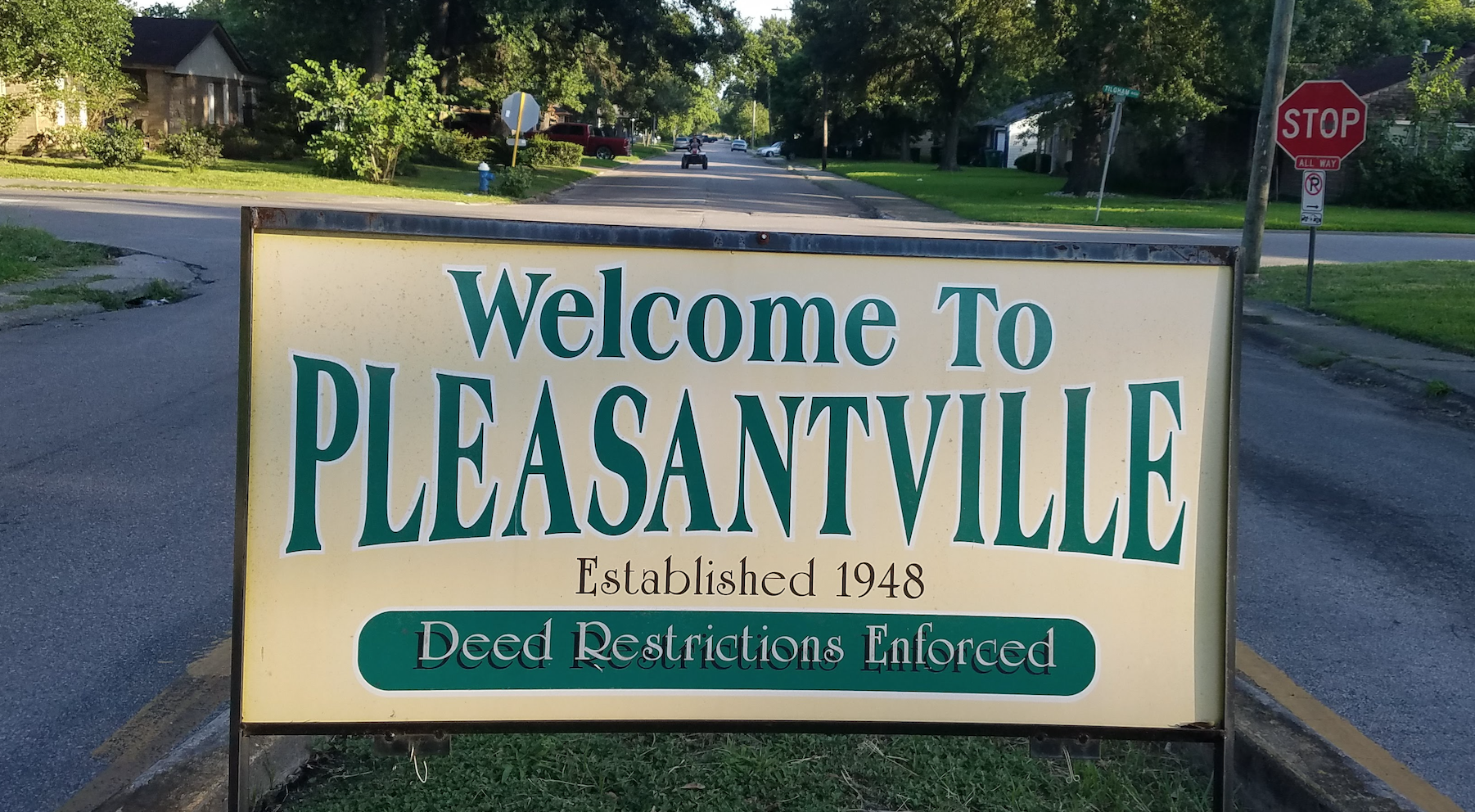 Tucked inside the northeast corner of Houston’s 610 Loop, Pleasantville is an easy enough community for the thousands of daily commuters navigating the Houston Ship Channel bridge to overlook. The neighborhood is one of Houston’s first planned, deed-restricted development for African Americans, annexed in 1949 but built during the 1950s. Situated just behind the Anheuser-Busch brewery fronting I-10, Pleasantville rarely makes the news, except, of course, if a fire breaks out among one of the dozens of chemical facilities that surround the area, which is what happened in the mid-1990s. After significant flooding during Hurricane Harvey, the neighborhood known for its social cohesion and civic engagement, even had to convince local officials to include it on the list of areas eligible for help.

Now, thanks to a multi-million dollar grant targeting several Gulf Coast neighborhoods, the community of roughly 3,000 people, has a rare opportunity to support its grassroots efforts to address the pollution and lack of infrastructure and resources with meaningful funding.

A little over a month ago, when several historically African American communities around Houston gathered at the United Way to celebrate Juneteenth, the audience heard about the history of several of those communities and how they helped shape Houston. They heard about Independence Heights and Third Ward, Settegast and Sunnyside. But they also heard about Pleasantville. For Mary Fontenot, a lifelong resident of the community and president of the Pleasantville Historical Society, the event gave her the opportunity to highlight Pleasantville’s unique history and how it had been home to the first African Americans to serve on the Houston YMCA Board and on Houston City Council. “One of the unique things about the history of Pleasantville revolves around the high level of public participation within our community,” said Fontenot. “There have been elections where over 90 percent of our residents have turned out to vote. I really don’t know a lot of communities that can say that." Now, the community is hoping that their engagement can help steer a potentially transformative grant to address some of the neighborhood’s most critical challenges.

Before 1985, there was only one way into the neighborhood, thanks in part to what researchers from Texas Southern University dubbed the “triple whammy” of industry surrounding it including the port, rail yards and diesel truck traffic along the highways. In the summer of 1995, the community became the center of attention when out of control fires erupted at four nearby chemical storage facilities, reigniting two times in the next few weeks. Thanks to that disaster, which spewed a “toxic black smoke” into the air, the city passed the Hazardous Enterprises ordinance to regulate the location of facilities housing hazardous chemicals, but existing warehouses were grandfathered in.

Gail Dixon, a retired teacher and lifelong resident of the community, feels that not enough progress has been made towards preventing more fires in the area. At a recent town hall meeting with elected officials, residents echoed that sentiment, voicing their frustration over the lack of information that they have received from the Texas Commission on Environmental Quality (TCEQ) about the pollution that surrounds their community. Each time they requested information from the TCEQ about specific sites they suspect contribute pollution, residents said they’ve been denied on the basis of the Homeland Security Act.

Research shows that the environmental pollution that continues to plague the community 24 years after the fires is attributed to the chemical plants in the area as well as the countless cars, trains and ships that navigate the Houston Ship Channel, part of one of the busiest ports in the country. According to a recent publication from the Environmental Defense Fund, Pleasantville experiences the highest concentration of particulate matter between 8 a.m. and 7 p.m., when traffic is at its peak. The data also shows that exposure tends to extend into midnight, leaving many residents and researchers to believe that this is due to chemical plants surrounding the community. All of this puts residents at an increased risk of developing cancer, asthma, and other respiratory illnesses.

In addition to addressing their environmental concerns, residents of Pleasantville said they often find themselves fighting for resources that tend to be more readily available to other Harris County and the City of Houston residents. Parts of Pleasantville experienced heavy flooding during Hurricane Harvey, due to barriers created by the surrounding highways, chemical plants and train tracks. But the community was not initially included as one of the beneficiaries of funding that nonprofits and government entities could access from the Hurricane Harvey Relief Fund. It was only after extensive petitioning from the community that the county and the city decided to include Pleasantville as one of the areas eligible to receive funding.

The community of Pleasantville also continues to fight for proper infrastructure, groceries stores, health clinics and adequate public transportation. Residents in need of health services have to drive seven miles to the nearest hospital or depend on public transportation, which can take up to one hour. These challenges have led community members throughout the decades to rely on each other, nonprofits and academic institutions for assistance.

Pleasantville is home to 2,860 residents, with 47 percent being African American and 51 percent of Hispanic/Latino origin. In addition, 37 percent of the residents make below $25,000 per year, well above Houston's average of 27 percent. But it faces challenges common to many historically African American neighborhoods, not just in Houston but across the country.

In 2017, the W.K. Kellogg Foundation announced that Pleasantville would get a boost few under-resourced communities get. Under its "thriving children" focus area, the foundation awarded the community organizations of Turkey Creek in Gulf Port, Mississippi; Lower 9th Ward Center for Sustainable Engagement and Development in New Orleans, Louisiana; Wedgewood in Pensacola, Florida; Africatown in Mobile Alabama; and Achieving Community Tasks Successfully (ACTS) in Pleasantville, a five-year $3.3 million grant to research quality of life issues and advocate for equitable policies through a collaboration that would partner experts from historically black colleges and universities with community-based organizations. The collaboration, known as the Gulf Coast Equity Consortium, aims to “advance health equity and improve kids’ natural environments” across the Gulf Coast.

In Pleasantville, the grant, led by a partnership between ACTS, Texas Southern University and the Deep South Center for Environmental Justice will create a comprehensive plan addressing the community's concerns. "ACTS, along with the four other community-based organizations in each of the Gulf Coast states, is tasked with developing research-to-action plans designed to address community-identified environmental justice concerns," explained Denae W. King, an environmental researcher at Texas Southern University and member of the consortium.

For community members, the connection to academics has been critical. “The ability to work with the professors at Texas Southern University and all of the professors throughout the Gulf Coast region is invaluable,” said Bridgette Murray, a retired nurse, current president of the Pleasantville Super Neighborhood, and founder and executive director of ACTS. “Many of the professors are established and well-known nationally and internationally. HBCUs have and continue to provide resources to the under-served. The professors at Texas Southern are able to provide additional resources to assist in meeting our goals. It is a true collaboration."

Since the first meeting in January 2018, community members have worked with the consortium to create an actionable plan. Addressing the lack of information many residents have over the pollution that surrounds their community has been a key focus. With the help of Texas Southern University, ACTS established a relationship with the Environmental Defense Fund (EDF). Then, in May 2019, the community received funding from EDF to purchase air monitors, allowing the residents to directly monitor the air quality in Pleasantville. Existing air monitors are located outside the community, limiting the type of information that they are able to capture. “The project requires substantial community input from identification of air pollutants to monitor to the selection of the types of monitors and placement locations for the monitors,” explained King. The community hopes to have these monitors installed this month.

"The proximity to industrial [and] commercial encroachment remains our greatest environmental threat," said Murray. "We believe industry could be better neighbors."

The success of the monitors, and of any comprehensive plans that follow, depends on the level of community engagement. "The relationship between W. K. Kellogg and the Pleasantville community, led by ACTS, is essential towards meeting the needs of our citizens,” said Paul Joseph, a lifelong resident of Pleasantville. “We hope that the data that is collected and analyzed by experts will provide a clear and concise picture of the issues affecting our community and foster a plan that will lead to policy change." Joseph himself exemplifies Pleasantville’s civic engagement. He is a member of the Pleasantville Historical Society, Friends of the Park, Civic League, Super Neighborhood #57 and ACTS. Fontenot attributed the high level of public engagement to an established mindset between residents. "Growing up in Pleasantville, we are taught that being involved and caring for the community matters,” she said. “It is just the way things are for us."

Even as the demographics of Pleasantville have shifted as the Latino population has grown, the neighborhood takes pride in its cohesion. Every September, the community celebrates Fiesta Patrias, a celebration of Independence Day in Mexico, Costa Rica, El Salvador, Guatemala, Honduras, and Nicaragua. “The community does not only speak about diversity, but people go out of their way towards learning about the Hispanic/Latinos living in the community,” said Dora Vides, who moved into the community nine years ago and co-organizes the event. The desire to learn about other nationalities has led some residents to enroll in free Spanish classes at the local community center sponsored by ACTS. Llyod Sams is the director of Lloyd Language Learning there and said his class of 32 students, ranging from 11 to 89 years old, shows the willingness of Pleasantville residents to embrace diversity that extends beyond the celebration of special events. "Residents place the value of learning Spanish around education, which allows them to interact with other residents in order to properly address the community's concerns and compete in the job market,” Sams said. Current student Hortence Blake, a retired baker, agreed. “We embrace everyone who lives and comes to Pleasantville,” she said. “We feel that the only way Pleasantville has been able to maintain a strong hold within the community is by embracing diversity."

The community is also supportive of its youth, which can be seen through the Pleasantville Oilers, the little league football and cheerleading team. Every year, the community comes together to celebrate the start of the season by organizing a parade and supporting various fundraising activities throughout the season. ACTS has also decided to invest in the youth by offering free classes during the summer on climate change and sea level rises. Marsha Lister, a board member of Friends of Pleasantville Park, an organization that works with the local community center to provide services to residents, strongly believes that youth play a big role in the development of the community. "Our youth are a reflection of the diversity that exists in our community,” said Lister. “We will always support them and anyone who comes to our community.”

"Pleasantville, like many other communities, can speak to its historical high moments,” said Murray. “The challenge today is surviving into the future and doing it in a cohesive manner."

Juan Antonio Sorto is a doctoral candidate in the department of urban planning and environmental policy at Texas Southern University. His most recent piece for the Urban Edge was on community organizing in Lakewood following Hurricane Harvey.

This story has been updated.