US Customs and Border Protection photo

In the wake of two historically devastating storms in 2017, financial aid from the Federal Emergency Management Agency and the U.S. Department of Housing and Urban Development contributed to an increase in wealth inequality.

This finding and a series of recommendations were a part of the U.S. Commission on Civil Rights’ report released Sept. 21: “Civil Rights and Protections During the Federal Response to Hurricanes Harvey and Maria.” In its report, the bipartisan, independent commission found mismanagement and a lack of programs focused on the most vulnerable communities in Texas and Puerto Rico.

Disparities in the response to these and other natural disasters have been well documented by researchers. In its press conference Wednesday to announce the report, the commission pointed to an example from Hurricane Harvey where two cities less than 15 miles apart from each other in Jefferson County experienced widely different outcomes.

“Taylor Landing, which is 87% white, received $60,000 per person,” Joni Baker, a member of the Texas Advisory Committee to the U.S. Commission on Civil Rights, said. “Port Arthur, which is 70% persons of color, received $85 per person. Applications for aid were disproportionately burdensome on the disabled, on the elderly, on those with little or no proficiency with technology and people with limited English proficiency.”

Through investigations, testimonies and research, disaster survivors and experts emphasized a need for more collaboration between government agencies at all levels.

The report included testimony from former Kinder researchers, including Jie Wu, who shared that Houston-area renters were less likely to receive FEMA assistance than homeowners in seven of the area’s last nine disasters. Its authors also cited the all-too-troubling statistic that nearly one in three Houstonians cannot afford a $400 emergency as an example of the precarious situation many face amid natural disasters.

Recommendations included that engagement with the public should begin with the planning for an emergency, during the response and continue into the mitigation and closeout of such projects. Additionally, in planning for future catastrophes, FEMA must increase its cultural competency, and its recovery efforts should prioritize survivors with the greatest needs. After Harvey, these groups included people of color, low-income households, the disabled, the elderly, non-English speakers, immigrants, LGBTQ+ communities and others in addition to the general public.

Merrill Matthews, vice chair of the Texas Advisory Committee to the U.S. Commission on Civil Rights, outlined an action agenda based on the report’s findings that included expediting and standardizing eligibility for disaster relief aid, identifying communities with language barriers and improved collaboration between federal, state and local agencies and nonprofits.

Other proposals were to establish deployable civil rights task forces to address the needs of marginalized communities after a disaster and to encourage the Department of Labor to establish ethical labor practices to meet the high demand of construction and repairs.

Next steps for the committee’s report include its submission and review to Congress and the White House.

“This problem will not go away,” Commission Chair Norma V. Cantu said in her concluding remarks. “We’ve had hurricanes before, and we learn our lessons. But then they become bigger and happen more frequently. We need to understand that there are very vulnerable populations. For people with disabilities, it’s not that small of a group. After COVID, it looks like it’s going to be one out of every four Americans who have some type of disability or hidden disability.

“Natural disasters continue to confront us. We need to respond as a unified nation. I hope this report inspires Americans to leave no one behind in a crisis or a disaster. Together, we are all survivors.” 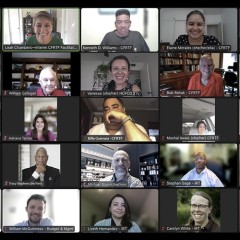