City unveils ‘Resilient Houston,’ its plan to make the city stronger at every level

When it comes to health care, most people know they can either put in the work of maintaining a healthy diet and getting enough exercise now or pay a much higher price — physically and fiscally — later in life. The same is true when it comes to the health

When it comes to health care, most people know they can either put in the work of maintaining a healthy diet and getting enough exercise now or pay a much higher price — physically and fiscally — later in life. The same is true when it comes to the health and well-being of a city and its residents. In the long run, it’s smarter and less expensive for local governments to invest now to ensure they are prepared to handle unexpected disasters and possibly prevent problems altogether in the future.

On Wednesday, the city released its “Resilient Houston” strategy, a robust plan to invest in and strengthen the capabilities of neighborhoods, communities and the entire region to address, withstand and quickly recover from physical, social and economic shocks and stresses.

“We are faced with a choice. Either we commit now to making the investments in our workforce and infrastructure that can prevent huge losses, or we become short-sighted and think we have plenty of time,” Turner wrote in the strategy’s opening address. “By choosing the latter, we will be too late.”

Preparing for shocks and addressing stresses

Top of mind for many Houstonians when they think of resilience are the six flooding events in five years that were declared disasters by the federal government — including three 500-year floods in three years: the Memorial Day Flood in 2015, the 2016 Tax Day Flood and Hurricane Harvey in 2017.

In the context of resiliency, hurricanes and flooding are examples of acute shocks. Large scale, sudden events that disrupt and endanger life. Other shocks include economic crisis, cyberattacks, terrorism, chemical disasters and extreme heat and drought, among others.

Critically, though, the strategy not only addresses shocks, but also a litany of chronic stresses that make recovery from shocks difficult and that represent hurdles in Houstonians daily lives. The shocks and stresses identified in the strategy are tailored specifically to Houston.

“The release of Resilient Houston is a pivotal milestone in resilience-building efforts after Hurricane Harvey, but there is much more work to do,” Aho said in a release. “Today is the beginning of implementing this ambitious, yet achievable, framework for resilience.” 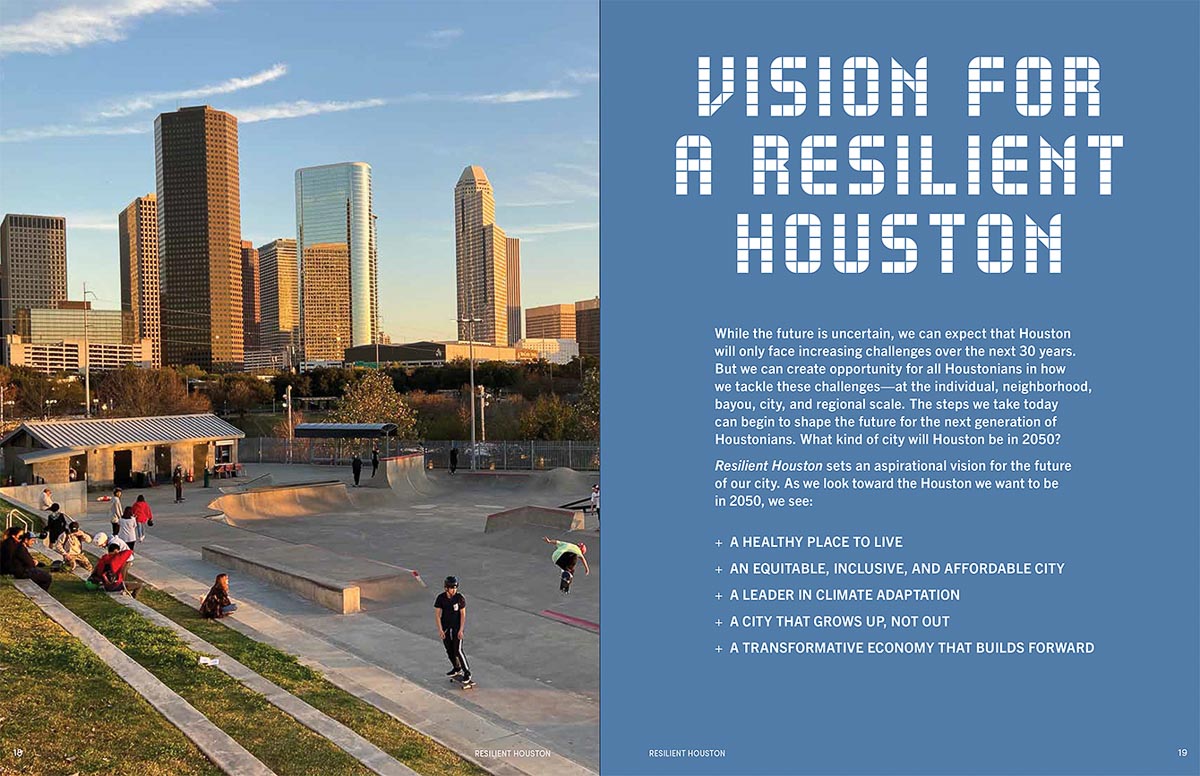 “Resilient Houston” relies on collaborative action and the alignment of efforts by groups, organizations and initiatives at the neighborhood, city and regional levels to build resilience.
Source: The City of Houston

How the strategy is organized

“Resilient Houston” relies on collaborative action and the alignment of efforts by groups, organizations and initiatives at the neighborhood, city and regional levels to build resilience. The plan establishes five key “Visions” for Houston as:

► A Healthy Place to Live

► An Equitable, Inclusive and Affordable City

► A Leader in Climate Adaptation

► A City That Grows Up, Not Out

The goals and targets are divided among the strategy’s five chapters, each of which addresses one of the five “Scales.”

City is partnering with the Kinder Institute and others

The Kinder Institute played a key role in the development of “Resilient Houston” as a part of the process strategy team. Further, research and analysis from the Kinder Institute for Urban Research undergird the evidence-based actions highlighted in the strategy to address long-term stresses present in many Houston neighborhoods, especially those that have been underserved for years. These stresses include limited access to high-level education and quality, affordable housing. Going forward the Kinder Institute will help the city implement actions related to housing, transportation and open data, among others.

“Our efforts need to be bold, transformative, and aligned to achieve the outcomes Houstonians deserve,” Turner said in a release. “ ‘ Resilient Houston’ is a framework for transformative change that comes from thinking and acting together to build and grow Houston’s long-term resilience. We will need our partners and every Houstonian at the table to achieve this vision.”