A dashboard created by the Kinder Institute’s Houston Community Data Connections shows job-loss estimates in each Harris County community. Many of the areas impacted most by the economic downturn are home to low-income renters, the working poor and single

A dashboard created by the Kinder Institute’s Houston Community Data Connections shows job-loss estimates in each Harris County community. Many of the areas impacted most by the economic downturn are home to low-income renters, the working poor and single-parent households.

It has been more than one month since Harris County issued its initial stay-at-home order to slow the spread of COVID-19. In that time, the number of confirmed cases in the county has grown from 134 on March 24 to more than 6,100 as of today. While this growth seems to indicate a widespread outbreak, the virus is not affecting all areas equally.

While public health has been prioritized, the stay-at-home order has brought the economy to a halt. Initial jobless claims, i.e. claims for unemployment benefits filed by unemployed individuals with state unemployment agencies, have reached levels never before seen — both across the nation and here in Texas.

Starting Friday, many businesses in Texas will be given the green light to reopen in limited capacity. Restaurants can again offer dine-in service and retail stores can allow customers to shop inside stores. Malls and movie theaters are also part of the first phase of reopenings. Depending on how things go in the weeks following May 1, a second phase is slated for May 18. The response from public health experts to Gov. Greg Abbott’s plan to partially reopen the state’s economy has been mixed and not all business owners will choose to reopen on Friday. It’s unknown exactly how long it will be before we see anything that remotely resembles a recovery.

To better understand the impact of COVID-19 on employment in Harris County, we created a dashboard to examine the sudden jump in joblessness at the local level using Texas Workforce Commission data on unemployment claims for the weeks of March 21 to April 18 and a modified version of the methodology developed by the Urban Institute.

Our analysis shows that across all Harris County neighborhoods, the estimated proportion of workers that have experienced job losses up till now ranges from 7.3% to 9.6%. In other words, this is a pretty uniform level of economic distress. However, accommodation, food services and retail trade industries are affected the hardest, compared to other industries.

During the past five weeks, more than 33,000 accommodation and food service industry jobs in Harris County may have been lost as a result of COVID-19. Many workers in this particular industry live in the Sharpstown, Gulfton and Greenspoint areas. Construction workers who might have experienced job loss mostly live in east Harris County, including Baytown, La Porte and the Pasadena area. COVID-19-related job losses in retail are spatially distributed quite evenly across Harris County, except the west side of the Interstate 610 loop. Those are wealthy neighborhoods where few residents work in the retail industry.

Users can also explore the data by neighborhoods. For example, about 2,900 workers (8.7%) in the Five Corners neighborhood in south Harris County may have experienced job loss — 23% of those work in accommodation and food services, 16% in the health care and social assistance industry, and 15% in retail trade. In Greenspoint, approximately 9.2% of the workers might have lost jobs, mostly in accommodation and food services, retail, administrative support, waste management and remediation services. 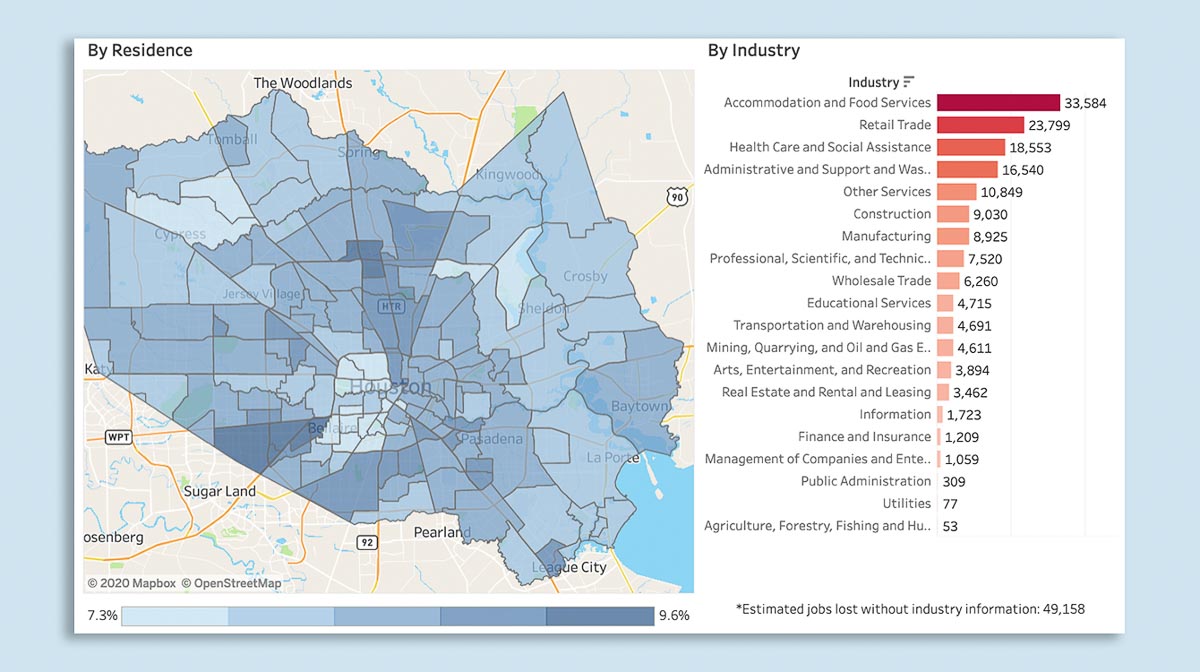 In addition to visualizing the estimated job losses, we delve further into the data using several neighborhood indicators to identify areas that may experience even greater challenges during this public health crisis.

When it comes to housing stability, renters are among the most vulnerable population. Many who lose jobs, even temporarily, may not be able to pay the rent. Although the Texas Supreme Court extended moratorium on evictions until May 18, landlords could still file for an eviction.

It’s estimated that 9.2% of all workers who live in the Sharpstown and Greenspoint neighborhoods of Harris County will experience job loss. At the same time, those two communities have a high proportion of renters (over 75% and 84%, respectively).

Another important indicator of economic distress is the number of renters who spend 30% or more of their income on rent, which means they are considered rent-burdened. In Greenspoint, 59% of renters are rent-burdened. In Aldine West and Aldine Southeast, more than 60% of renters spend over 30% of their income on rent. With job losses estimated to be around 8.6% for both neighborhoods, the struggle to keep a stable home will be even greater.

While we are five weeks into the stay-at-home order, many private and public schools in Harris County will be closed for the remainder of the school year, per Gov. Greg Abbott’s order. And, despite the reopening of the service and entertainment industries in limited capacity, licensed day care centers will remain open only to children of essential workers. This added complication affects parents from all areas. In particular, single-parent families face a considerably challenging time as they rely on one income and don’t have the support of another adult in the household to care for the children. For example, 75% of children in Third Ward and 71% in the IAH Airport neighborhood live in single-parent households. At the same time, these areas also face an estimated job loss of 8.6% and 8.9% among their residents, respectively.

This problem also disproportionately affects women, especially those working low-wage jobs. As Rice University’s Dr. Quianta Moore and her colleagues wrote in an issue brief: “[n]ow millions of children are at home all day, and working mothers are faced with balancing their children’s distance learning requirements, new child care needs for their school-age children, and working in a low-wage job that is now deemed essential, while worried about becoming ill.”

Poverty, unemployment and the Southwest Corridor

Some of Harris County’s hardest-hit areas for COVID-19-related job loss are neighborhoods with a high concentration of residents considered to be working poor. For example, Gulfton has a poverty rate of 38% but its unemployment rate was just 4% in 2018. However, due to COVID-19, about 9.4% of workers living in this community may have lost jobs.

Beyond the neighborhoods highlighted above, Alief and Westwood are estimated to have the highest levels of job loss among their residents and both rank high in many of the vulnerable demographics. Alief alone is estimated to have over 5,000 workers (9.2%) lose jobs in the past five weeks. It has a high proportion of renters (55%) and a high percentage of children living with single parents (44%).

While the Westwood neighborhood is relatively small, 9.6% of workers who live there may have become jobless because of the pandemic. Again, this community has a high concentration of vulnerable populations — 93% of its residents are renters, 62% of the children live with single parents and 41% of residents live below the poverty line.

There are many important issues to consider as we navigate the COVID-19 crisis. Many lives are at risk, as are many livelihoods. We need thoughtful policies, such as food and rent assistance, to help relieve some of the burdens on our most vulnerable groups. Also, we need to consider the important role of schools and day cares as we move to reopen the economy. As new data on Texas unemployment claims become available each week, we will update our estimates. We hope this analysis can lead to further targeted relief for many in our community.

To understand the employment impact of COVID-19, we applied the methodology developed by the Urban Institute to Harris County neighborhoods using the Texas Workforce Commission’s unemployment claims data for the weeks of March 21 to April 18, 2020, to examine the sudden jump in joblessness by industry at the local level. We will update our estimates every week with new Texas unemployment claims data.

​Note that these numbers are estimates and may not be comparable to actual job loss/pay-cuts in each neighborhood. We highly recommend interpreting these results as relative job loss levels.