New research from the Houston Education Research Consortium shows that — in both urban and nonurban parts of the state — students learning English are taking longer to become proficient. Texas needs to act now to address the problem and help these student

New research from the Houston Education Research Consortium shows that — in both urban and nonurban parts of the state — students learning English are taking longer to become proficient. Texas needs to act now to address the problem and help these students avoid long-term struggles in school.

In Texas public schools, seven out of 10 English learners (ELs) who began first grade during the 2014-15 school year did not reclassify as English proficient within five years — a 90% over first-grade students who were still learning English when they began school in 2000-01. While the number of English learners who are taking longer to reclassify is on the rise in the Houston area, this pattern is even more significant elsewhere in the state, according to a new report from the Houston Education Research Consortium (HERC), a program of the Kinder Institute for Urban Research.

English learners (Els) are students who enter school without the language skills needed to participate in an English-only classroom. To overcome this language barrier, ELs receive additional support and services to help them achieve the language skills necessary to be reclassified, meaning their fluency level has grown to the point they can successfully participate in the typical English-only curriculum and engage with the full range of educational programs available at a school.

Since 2000, the number of ELs beginning first grade in Texas public schools has increased; however, the increase has largely been proportional to the overall increase in student enrollment in the state. Consequently, although the number of ELs has increased, the percent of students who began first grade as ELs has remained relatively stable between the 2000-01 and 2014-15 school years (see Figure 1, dark blue line).

It is anticipated that students who begin first grade as ELs in Texas public schools to reclassify at some point during elementary school. Students who take longer than five years to reclassify are considered to be long-term English learners (LTELs). Compared to their EL peers who reclassify in elementary school, LTELs are particularly at risk for multiple negative educational outcomes, including lower scores on state and national tests, greater risk of dropping out of high school, and a significantly lower likelihood of attending college.

Despite the share of first-graders who are ELs remaining relatively stable across time, the percent of these students who take more than five years to reclassify has increased significantly. The increase was particularly pronounced beginning with 2008-09 first-graders. ELs who began first grade in the school years from 2000-01 to 2007-08, about 40% did not reclassify within five years and became LTELs. The percent of Els who started first grade during the 2008-09 school year and became LTELs increased to nearly 50% — that share continued to increase in each subsequent school year. Almost 70% of students who began first grade as ELs in 2014-15 became LTELs (Figure 1, gray line).

In Texas, the share of first-graders who were Els in 2014–15 and did not reclassify as English proficient within five years increased 90% compared to 2000–01. 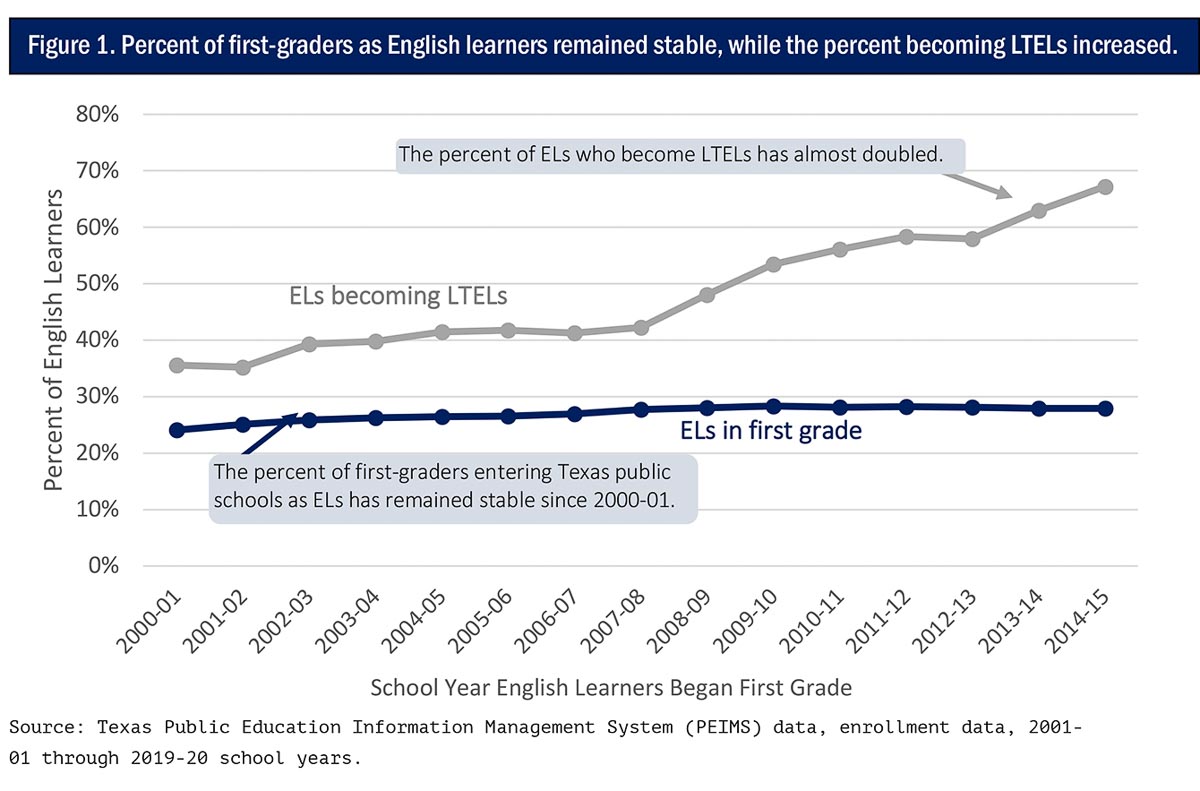 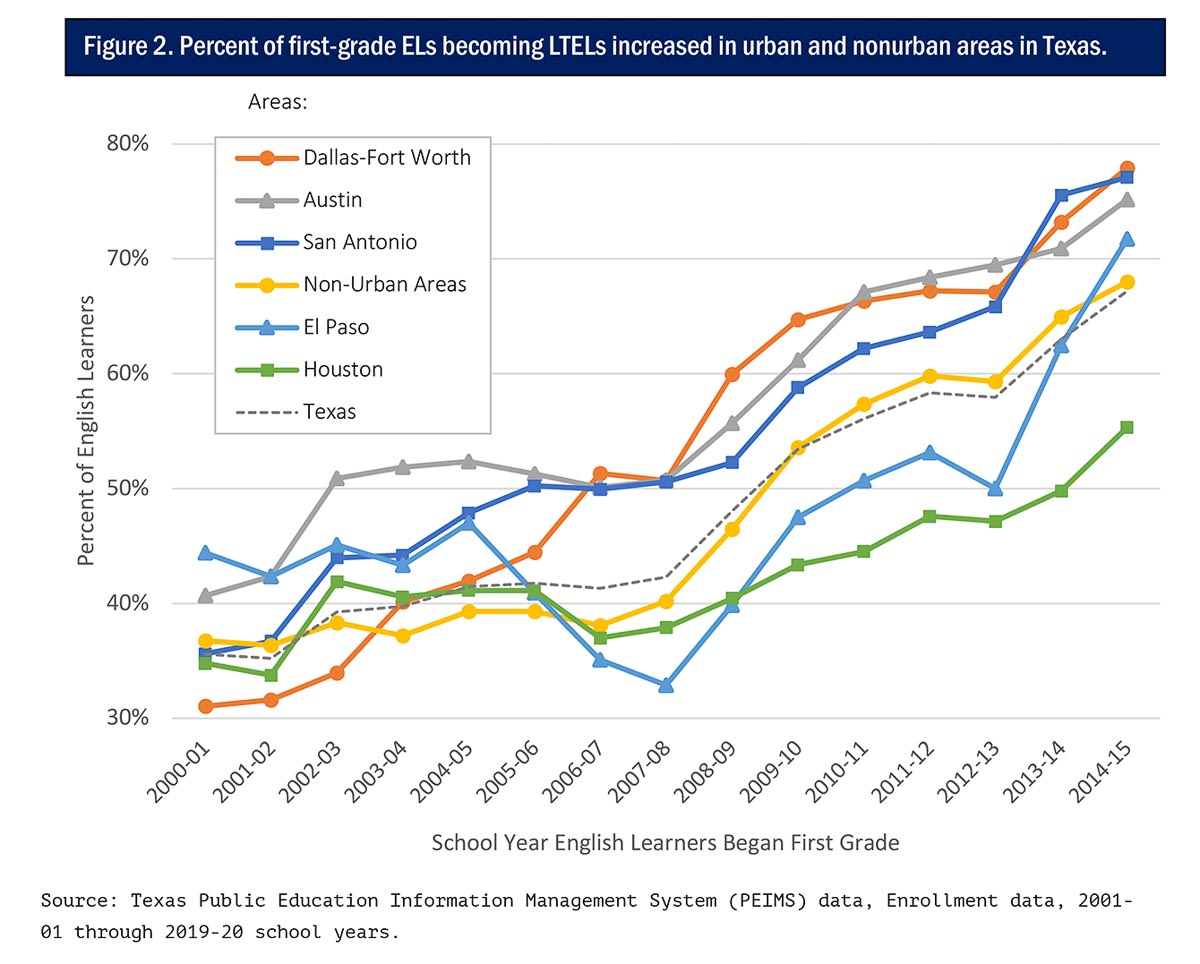 Further research is needed to better understand the factors that played a role in these trends, including school budget cuts after the Great Recession, changes to EL reclassification policies, and the shortage of qualified bilingual teachers in Texas. Regardless, it is essential to take steps now to support ELs and LTELs currently attending Texas public schools. The number of EL students in Texas is unprecedented and growing, and without decisive and swift action, these students will continue to experience the negative repercussions of delayed reclassification. Adding to this urgency are the disruptions to the educational programs and services EL students receive that have been caused by the COVID-19 pandemic, which may further delay reclassification for even more EL students statewide.

Reclassifying EL students in a timely manner is essential to their long-term academic success, but trends throughout Texas over the past several years show decreasing numbers of ELs making this critical transition within their first five years of schooling. While future research can help uncover the root causes, immediate work is needed to provide equitable support for these students and help them avoid the negative educational outcomes typically associated with LTEL students.

HERC is conducting a long-term study of long-term English learners in Texas, with particular focus on 10 Houston-area public school districts.