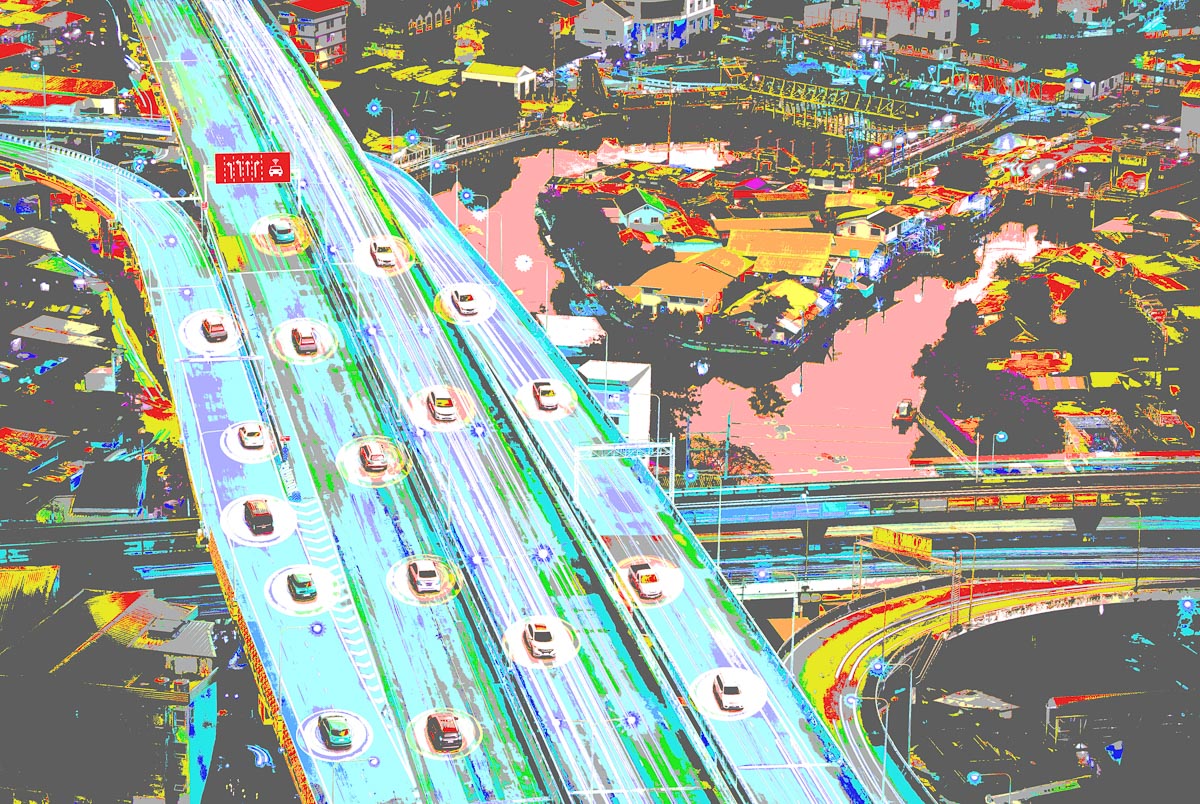 In the 1930s, motordom learned to depict an unachievable future utopia that is forever just over the next horizon, apparently always close enough to attract extravagant private and public investment, but somehow never actually achieved.

Note: This is an excerpt from "Autonorama" by Peter Norton. Join a discussion with the author at our Urban Reads webinar on April 13.

The purpose, as some of motordom’s leaders explained to one another, was not to satisfy personal transportation demands but to serve them while keeping them strategically unsatisfied, to stimulate consumption. Transport sufficiency was never the objective. Motordom sold not personal transport but transport consumerism. The heirs of such transport salesmanship take the form of international partnerships of motordom and tech, which are still in this business of avoiding sufficiency for the sake of consumerism. To divert audiences from realistic transport sufficiency, promoters of car-dependent technofuturistic utopias promise instead unrealistic transport solutions, up to and including “zero crashes, zero emissions, and zero congestion.”

Such promises are attractive but hard to believe. They are also not new: the unfulfilled promise of a car-dependent city that is also safe, clean, and congestion-free is well over eighty years old. How then to keep the claims credible? For this purpose, motordom long ago developed the technofuturistic spectacle: a depiction of a future so vivid and appealing that it invites acceptance and approval. Essential to such displays are conspicuous evocations of high-tech and future-tech possibilities, which invoke the prestige of science and impart new credibility to old, unfulfilled promises.

An astonishing, attractive, but far-fetched vision is presented; references to the wonders of state-of-the art technology and impressive demonstration projects deflect skepticism. The visions stimulate business partnerships, investment, policy support, and public interest, all of which reinforce one another.

Of the many displays promoting technofuturistic tomorrows in which technology has delivered a driving utopia, the first and still the most famous was General Motors’ Futurama exhibit at the New York World’s Fair of 1939–40, where millions saw the city of 1960 as GM imagined it: a drive-only, drive-everywhere city free of collisions and traffic jams, made possible by highway engineering supplemented by the electronics of the vacuum tube era. Twenty-five years later, GM presented an updated vision, Futurama II, at the New York World’s Fair of 1964–65. This time solid-state, transistorized electronics were to deliver what the first futurama had promised.

In the early 1990s, after another twenty-five years, automakers, technology companies, military contractors, and government agencies collaborated on a third exercise in technofuturistic enthusiasm. Microprocessors in digital computers would finally make possible the safe and congestion-free driving that the first two futuramas had depicted. They never called their vision Futurama III outright, but as the rightful heir of its two predecessors, it earned the title. Twenty-five years after that, in 2010, GM and its Chinese partner SAIC Motor Corporation collaborated on a monumental cinematic depiction of Shanghai in 2030, replete with computer-generated imagery. They presented their ambitious vision at Shanghai’s Expo 2010. Finally, with state-of-the-art sensors, machine learning, and wireless network connectivity, autonomous vehicles will purportedly achieve what the first three futuramas promised but failed to deliver: a city of ubiquitous, convenient, safe, and delay-free driving. Though GM and SAIC chose to name this most recent depiction “2030 Xing!” they might well have called it “Futurama IV”—it was unmistakably in the tradition of its predecessors. Given the essential place of vehicular autonomy in this version, however, perhaps the most suitable name for the vision would be Autonorama.

Autonorama’s technofuturism is borrowed from the first three futuramas, to which were added essential new elements: sensors, machine learning, and networked digital automation. Defined in this more general way, Autonorama has been hard to miss wherever transportation futures have been the subject of interest over the last dozen years: in the media, at trade shows, in corporate annual reports, in public policy forums, in private investment venues, and at research universities. Though promotional in its origins, Autonorama survives, adapts, and thrives by working its way into “sponsored” articles in media, policy white papers, and academic research proposals.

Not all high-tech transport is from Autonorama. Where high-tech automation is a tool chosen selectively from the wide sociotechnical spectrum of tools—from zero tech to future tech—serving transport purposes chosen with equal selectivity, high-tech transport is just high-tech transport. Self-driving road vehicles may well serve as useful and valuable tools in versatile transport systems. But Autonorama is evident wherever AVs are represented as inevitable solutions, or as ends in themselves rather than as means to ends.

Autonorama is the place where old-fashioned car dependency is lent new credibility through the application of a fresh gloss of high-tech novelty, where simple possibilities are neglected not because of their inferiority but because of their simplicity, and where implausible promises of perfection divert attention from practical possibilities of actual improvement. In Autonorama, transportation research looks like public relations (and vice versa), theoretically possible performance is equated with actual performance, and technology is less a human means to human-chosen ends than a mysteriously willful entity that inevitably delivers ever-better solutions, the merits of which are proportional to their technological sophistication.

In his 1921 film The Kid, Charlie Chaplin has a two-person business. As the Tramp, Chaplin is a glazier who repairs broken windows. His adoptive child, the Kid, stealthily throws stones to break windows, thereby sustaining demand for the senior partner’s services. As a business model, it’s an obvious winner. What’s less obvious is that among its real-world analogues are the businesses that sell cars, including those selling cars with automated driving systems.

Since the 1920s, automotive enterprises have been in the business of not just selling cars but sustaining and expanding demand for driving as well. Like the Tramp, these businesses propose to sell solutions to problems that they also create. In neither case, however, is the solution real. The Tramp’s customers can expect their windows to be broken again. Motordom’s customers—not only the car-buying public but also the public policy makers motordom depends upon—are caught up in a perpetual consumption machine, pursuing expensive but elusive solutions in vain.

Vehicles with advanced automated driving systems, misleadingly called autonomous vehicles, are nowhere near to being the solutions their promoters claim them to be. Yet AVs do work exceedingly well in one essential respect. Such vehicles credibly pretend to be categorically different from their predecessors. Though AVs are really just automatic cars, they are indeed different enough to persuade many to trust them to do what their predecessors could not: deliver safe, sustainable, affordable, and efficient mobility. In this respect, AVs have been working superbly. A future of sustainable mobility, however, will require seeing AVs for what they are: more of the same. They offer nothing really new. Instead of car dependency, they offer only high-tech car dependency.

AVs may be useful, but they can’t solve all our problems, and can even make them worse. High-tech tools are useful, but we have vastly more at our disposal.

Suppose today’s medical experts could travel back in time, taking supplies along, and offer people of 150 years ago three modern medical techniques. Which three would yield the best medical benefit: MRI systems, dialysis machines, and stents? Or sanitation, vaccines, and antiseptics? The question is not which three are the most technically impressive but which would make the greatest difference for the most people. The answer is obvious. Yet we are being asked to accept transport boons from the future that (we are assured) will be breathtaking in their technical capacities—when our most essential mobility needs can be better met with tools we already have.

If most people could walk to a convenience store, we wouldn’t have to figure out how to get everyone access to a robotic car that would take them there. If most children had safe ways to bike to school, we wouldn’t have to design school driveways long enough to accommodate driverless car lines for dropping them off and picking them up. If most bus stops were sheltered and equipped—thanks to technology—with digital signs telling bus riders exactly when the next bus will arrive, we wouldn’t have to commit so much research effort and money to developing high-tech systems that can fit more driverless cars in a given road lane. By recognizing the promise of high-tech driving as illusory, we have our best chance of recognizing all that we can do. When we rescue innovation from the technofuturists and recover the tools they have dismissed, we will find that we can do today, at far less cost, what they have promised to deliver for unlimited dollars at an ever-receding future date.

From Autonorama by Peter Norton. Copyright © 2021 Peter Norton. Reproduced by permission of Island Press, Washington, D.C. The views, information or opinions expressed in this post are those of the author and do not necessarily represent those of the Kinder Institute for Urban Research. 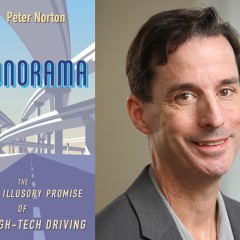