What Are “Road Diets,” and Why Are They Controversial? 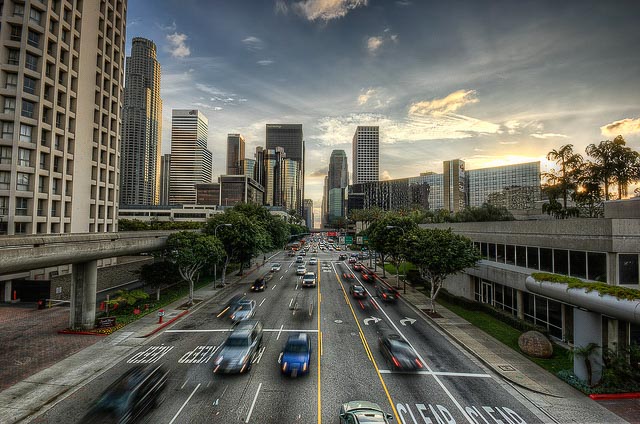 Despite criticism, even the federal government says the technique is effective.

Famously car-centric Los Angeles has proposed an ambitious plan to replace dozens of miles of car lanes with public facilities geared towards buses, bikes and pedestrians.

Though the concept has won plaudits in many circles, it’s also generating opposition from community groups who think the city’s intentionally making it so miserable to drive that people will have no choice but to choose other ways to travel.

The city’s general approach isn’t that revolutionary. Essentially, it’s imagining all the potential ways public space might be used, rather than maximizing its capacity to carry cars.

The strategy, known as a “road diet,” calls for restriping a stretch of road to remove at least one lane and turning that pavement over for other purposes.

Despite the controversy, as far as the federal government is concerned, it’s a settled issue: road diets work.

Before-and-after studies of road diet projects have given the Federal Highway Administration and local transportation departments the confidence to declare it a cheap way to reduce vehicle collisions and make roads more bike and pedestrian friendly.

FHA studies of road diet projects have found simply reducing the number of lanes dedicated to cars cuts vehicle crashes by 19 to 52 percent as a result of reduced speeds and fewer opportunities for collisions. And perhaps most surprisingly, according to the FHA, the technique doesn’t reduce the number of people who can move along a roadway.

“Half the battle is getting people to buy in,” said Neil Gaffney, public affairs specialist at the FHA.

“There has to be strong buy-in from elected officials,” said Randy Dittberner, a regional traffic engineer with Virginia’s state’s department of transportation.

But road diets – like roads themselves – can take many forms.

That’s what Seattle’s department of transportation did in 2010 on Nickerson Street, when it hoped to improve pedestrian safety and reduce travel speeds.

The project worked. In the year after the new configuration, typical driver speeds fell by 18 percent to 24 percent. The number of people traveling over the speed limit fell by 63 percent. Collisions decreased by 23 percent.

And that’s all while average weekday usage of the road hardly changed, falling by just 1 percent, or about 200 cars. The department found no evidence that drivers were merely avoiding the road and driving elsewhere.

Seattle, following the success of that road diet, as well as one on Stone Way that was initially met with opposition from local store owners, is now among the leaders in implementing the tool, said noted urban planner Jeff Speck, author of Walkable City.

In that book, Speck argues that the primary reason road diets contribute to safety is the removal of the left-hand “passing lane,” which “allows drivers to slip into a ‘road racer’ frame of mind. Whichever lane you are in, the other looks faster.”

He’s since released a video demonstrating some of the different arrangements traffic engineers can pursue with road diets to reconfigure roadways.

“Whenever you do these, there are people on both sides of it,” Speck said in an interview. “You have to do it for half a year, at least, to let people get used to it, and then they do.”

That might be partially explained by a study from the engineering firm AECOM, which found streets that undergo road diets rarely lose a substantial number of drivers. Generally, road diets are intended to applied to streets that have excess capacity, where their implementation won’t create congestion.

Here’s a snippet of that report, comparing average daily traffic counts before and after the road diet.

Following its road diet on East 14th Street, the Bay Area city of San Leandro proposed an even more ambitious project on the road in front of its downtown rail station.

“There was concern, but we went through an extensive community outreach process,” said Keith Cooke, engineering and transportation director with the city. “It’s just recently completed, and people I think have really been favorably receiving the project.”

Dittberner, the traffic engineer in northern Virginia, was lauded by the FHA for his community outreach on road diet projects.

He said his department has proposed a dozen projects and has successfully implemented all but one.

He said it’s important to realize that public hearings will always skew towards those who oppose something new. To address that political hurdle, his department reaches out to advocacy groups and other residents who support the project but might not otherwise attend. It also reaches out to homeowners associations and other groups who might not be aware of what’s planned.

“We can stand in front of a crowd and say stuff, but it comes across very differently if a member of the community explains why they support a project,” he said. “We’ve been very effective at getting enough residents to document there’s strong community support.”

Dittberner said when it comes to implementing a road diet program, successfully selling it to the public requires a technical analyses that’s unassailable. In other words, transportation engineers can’t tell a city manager they’re “pretty sure” the project will work. Leaders also have to be able to answer all the questions likely to be raised by a skeptical public.

He specifically highlighted the reaction to a project earlier this year on Kingstown Village Parkway, a four-lane road in Northern Virginia with just 5,000 daily car trips that the department proposed turning into a three-lane road with new bike lanes.

Segments of the community requested a second public hearing to voice their opposition. The department then sought out advocacy groups that supported the project to get their opinions in writing. That effort helped convince the area’s county supervisor Jeff McKay to support the program.

The project went forward and was finished earlier this summer. Dittberner said he hasn’t heard a single complaint over it yet.