A road trip to find the next big Texan metropolis 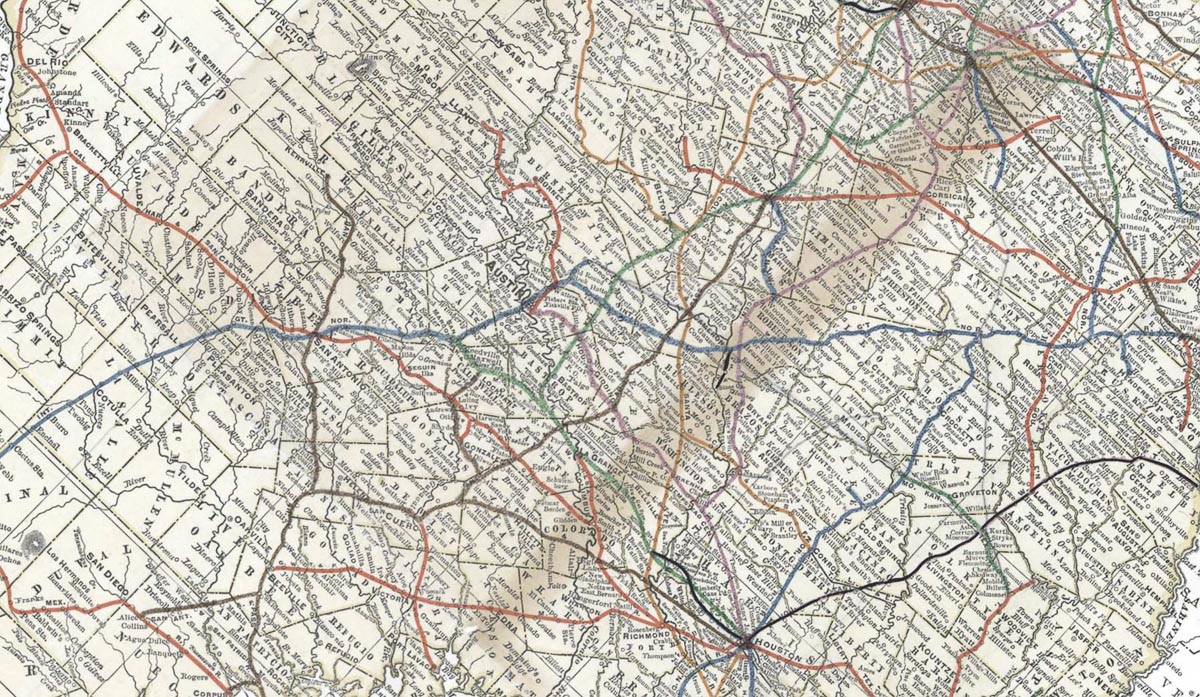 In May, I took a 2-week tour of Texas. The trip had many purposes, but one was to detect future growth trends. In a state that already has four fast-growing metros, is there a fifth one ready to arise?

For background: in the last few decades, Texas has become the great American superlative. The state has, since 2010, led the nation in net population growth; been the leader in exports; and for the 7 years following the Great Recession, accounted for every new job created nationwide. This “Texas Miracle” has been driven by low taxes and regulations, energy exploration, affordable housing, trade with Mexico, and a civic culture that welcomes growth.

The 20.8 million-person Texas Triangle is the most dynamic part. It has a “Big 4” of superstar metros—Dallas, Houston, Austin, and San Antonio—that account for 4 of the 5 fastest-growing metros of the nation’s 30 largest. They are all growing rapidly outward, in some cases into each other, or into other Texas Triangle metros. That is why I became curious whether a 5th one might arise, as to create a proverbial “Big 5.”

After driving 2,700 miles through the state, my candidates boiled down to Corpus Christi, South Texas, Laredo and I-35, Waco-Temple-Killeen, and the intermediate region between Austin and San Antonio.

Corpus Christi is arguably “energy city” USA, with a port that leads the nation in crude oil exports. The big white storage tanks are visible, one after the other, starting from the outskirts of town. But besides oil, the 429,000-person metro does not have much to offer the skilled workers who have flocked to Texas’ Big 4.

The city seems distressed, population growth is mild, and unemployment is higher there than in Texas overall. The dependence on such a volatile commodity means that its economic strength will always fluctuate.

Despite being on the Gulf Coast, Corpus Christi also does not have much of a beach culture. In fact, much of the Texas coastline from Corpus Christi to the Mexican border is not accessible to visitors, which is a lost opportunity. For these reasons, I do not see Corpus Christi becoming part of any Big 5.

South Texas has a broad and somewhat amorphous definition, but I am using it here to mean the Rio Grande Valley conurbation of Brownsville, McAllen, and Roma (not to mention vibrant Mexican cities like Matamoros and Reynosa).

The region is fast-growing, with McAllen’s population increasing by 12% since 2010. But it struggles with chronic poverty. Brownsville and McAllen were the poorest American cities in 2013, with 36% of Brownsville residents below the poverty line. Nearly 40% of adults lacked a high school diploma.

Because of these factors the region is not going to see fancy skyscrapers or tech workers flocking in. Unlike Houston or Austin, I could never imagine it attracting the global “creative class.”

The region’s strength is attracting working-class Mexican immigrants who enter to build a better life. The area has strong commercial corridors, notably U.S. 83, which runs along the border and is a fascinating stretch of Tex-Mex urbanism.

There is heavy police activity throughout the area due to the border situation, which intrudes on daily life. As such, much of the region’s future depends on how liberal or illiberal federal immigration policy is at any given time. Either way, I do not see South Texas becoming Texas’ 5th superstar metro.

While planning my Texas trip, I made Laredo a preferred stop for two reasons. It is the nation’s #1 inland port due to trade with Mexico (for more context, see my previous Catalyst piece on Monterrey). And it is the opening connection to I-35, a crucial piece of infrastructure running through Texas (more on that below).

As such, Laredo is definitely a “where the sausage is made” city, and the urban core is less important here than in most U.S. cities.

Like in other border cities, residents were poor, living in trailers and the sort of cobbled-together structures commonly seen in Mexico.

More crucially, there was not much development north from the city along I-35; most of the terrain between there and San Antonio is rural. The 278,000 person metro, for all its trade activity, felt like a remote, far-off part of America—and will likely stay that way.

This is technically two metros, but represents a 745,000-person stretch of urbanization along I-35 between Austin and Dallas. Since 2010 it grew at a respectable pace, but slower than any of the Big 4.

But there is little core identity for this region, so its emergence into Texas’ “Big 5” seems uphill. The closest shot is if downtown Waco can continue to build a hip lifestyle brand that has already surfaced somewhat, due to Chip and Joanna Gaines’ HGTV show Fixer Upper and their growing business empire.

While visiting the city, I took a walking tour around downtown with civic leaders, who not only showed me the Gaines’ Magnolia Project, but improvements the city was making to its riverfront, streets, and more. Waco will be an interesting city to watch in the coming decades. 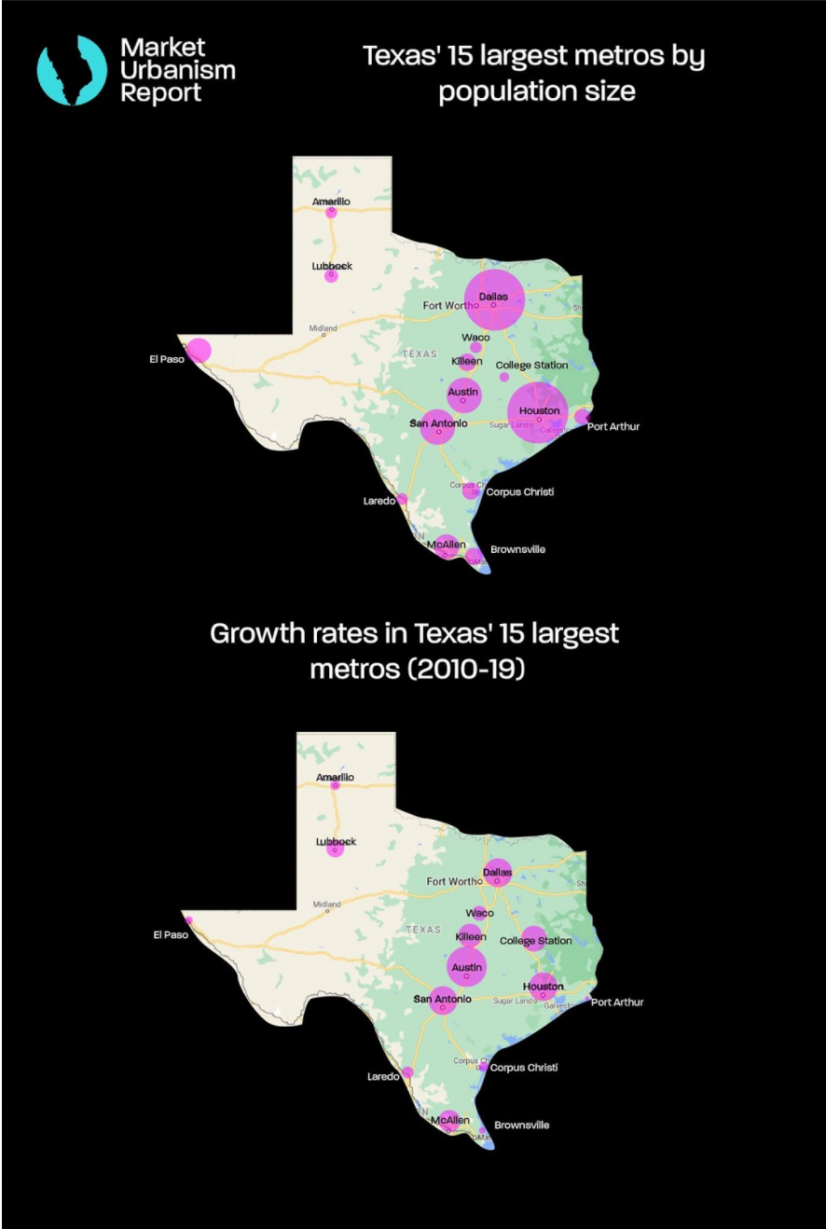 These two metros, with a combined population of nearly 5 million, are already part of Texas’ Big 4. But no article on the future of Texas growth is complete without mentioning how, like Dallas and Fort Worth, they could emerge as a combined megaregion.

The stretch of I-35 between the two cities is near-fully developed, with a number of fast-growing cities like San Marcos in-between (the intermediate counties of Hays and Comal are growing faster than either Austin or San Antonio).

West of I-35 in this area is the beautiful Texas Hill Country, which will always attract high-end residents. To the east is TX-130, a private north-south toll road meant to compete with I-35 for freight. Now mostly surrounded by Texas ranchland, it is becoming a hub for warehouse space, and it is reasonable to think major housing and retail projects could soon grow along this transport spine.

With this said, I do not know that there will be a “Big 5” in Texas. Rather, writes Tory Gattis of the Urban Reform Institute, “it’s really all about the Texas triangle—those 4 metros will just continue to grow ever-outward.”

He says that this will continue to generate little boomtowns like Round Rock, Katy, and San Marcos that benefit from proximity to larger core cities.

If one part of the Triangle is particularly well-positioned, it is the urbanized stretch of I-35 that goes through San Antonio, Austin, Waco, and Dallas, nearly to the Oklahoma border. It is perhaps the greatest beneficiary of corporate relocation and international trade, becoming one big, on-and-off stretch of massive warehouses, gas stations and planned communities. The numbers bear this out.

Even within that stretch of I-35, I think Austin-San Antonio has the best position to become the nation’s leading growth hub in future decades. More than Houston and DFW, it has a stronger cultural identity, placemaking, and natural amenities, and those are important to the increasingly selective transplants moving to Texas.

But as I have noted, many parts of Texas are solid, and the state’s embrace of capitalism and limited governance all but guarantees the growth will continue.

The views, information or opinions expressed in this post are those of the author and do not necessarily represent those of the Kinder Institute for Urban Research.

This article was originally published by Catalyst, the blog for the Independent Institute. It includes additional reporting from Market Urbanism Report content staffer Ethan Finlan.