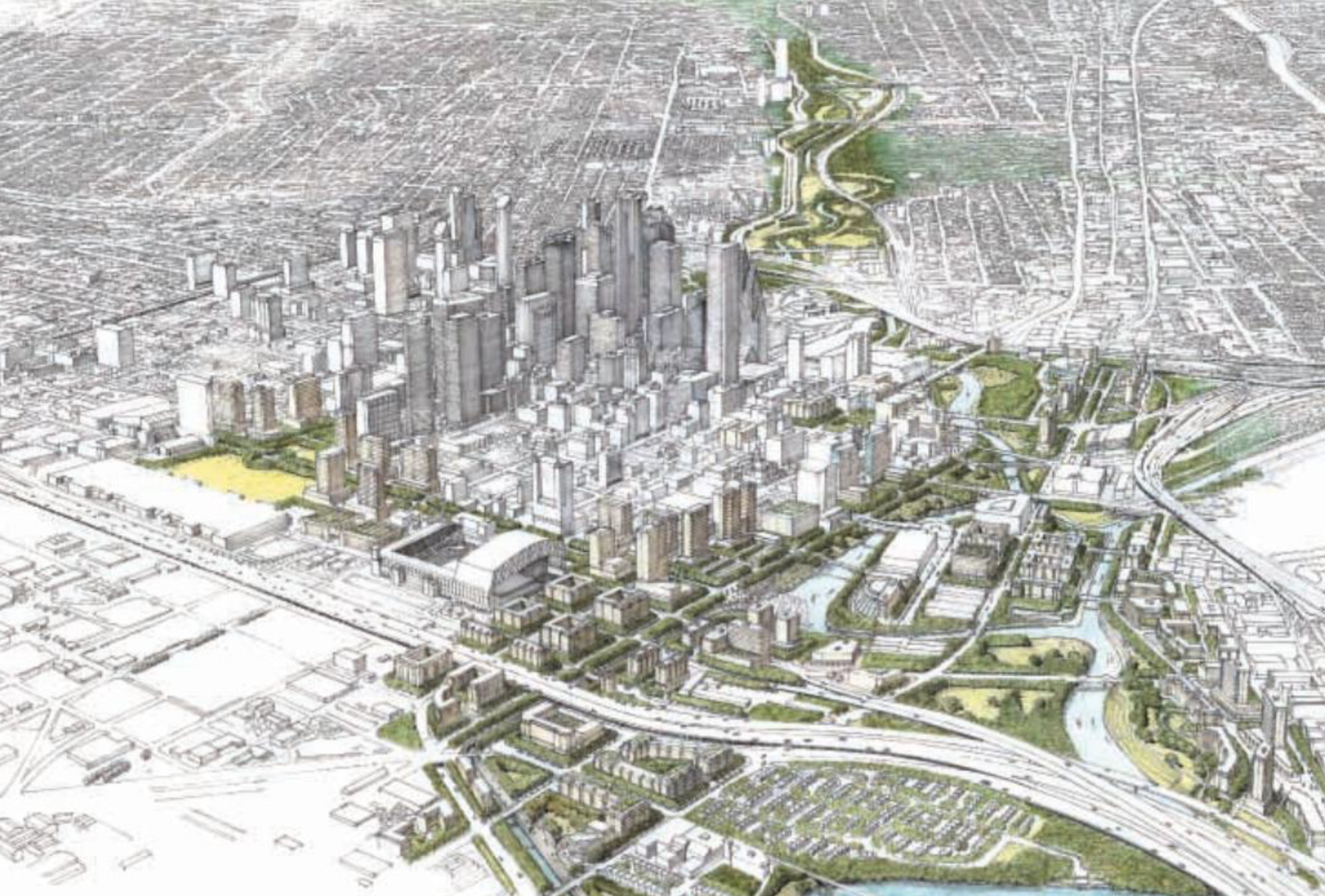 When the Buffalo Bayou Partnership's 10-mile stretch of park including Buffalo Bayou Park was named to the High Line Network as one of several high-profile projects across the country helping to reimagine under-loved urban spaces, the announcement carried with it a cautionary tale. Successful by many measures, the High Line in New York City has also become synonymous with rising real estate prices and gentrification. Indeed, the Network was created as a way for the teams involved on these big projects to reckon with that as they progress. It's something Anne Olson, president of the partnership, said they're taking seriously as they begin the next phase of their development, east of downtown, when she talked with with the Urban Edge about next steps in an interview that has been edited for length and clarity.

A lot of cities are looking to sort of rediscover, reinvent their waterways or repurpose old infrastructure and following quickly behind those conversations are concerns. I’m thinking most recently of Atlanta’s BeltLine, for example, and the issues there around affordable housing. What are some of the lessons you’re taking from those other high-profile projects also in the recently announced network?

Social equity is really front and center of what we’re trying to do and so I've really learned a lot from working with that group. There's a park in Washington, D.C. called the 11th Street Bridge Park and they really out of the entire network are the group that’s the farthest along with equity issues. They developed an equitable development plan and that has served as a guide for them. They’ve really worked very closely with the community. We’ve learned a lot from them, we also learned from the High Line, where they feel there’s more they could have done to reach out to more of the low-income residents in the nearby area. But as a result of that they focus a lot on their programming to reach them. I think as we move east and start to develop these parks and trails that programming is really going to be key. We want to have things that really reflect that community.

With the High Line, they never anticipated the amount of development it would spur. We are very conscious of that as we move east. We may not be able to stop that but we feel that we need to bring current residents and businesses along.

You just kicked off the stakeholder meetings this month for the east sector, what are some of the goals as you begin this plan?

We have three themes for this plan: authenticity: we want to reflect the cultural and industrial legacy of the East End and Fifth Ward and the bayou, inclusivity: we want to bring current residents and businesses along, and then connectivity: we've done a lot to connect the trails east to west but we haven’t done a lot north to south, using what we call green fingers that will extend into the neighborhoods to bring people to the bayou.

The stakeholder committee will be helping us with community engagement and really thinking of new and different ways to reach out. We're thinking of having small, backyard neighborhood meetings where residents help us organize those. It may be smaller groups like 20-25 people but again, trying to go where people are instead of expecting them to come to us.

I just think park space is a great uniter. We see with Buffalo Bayou Park, even though it's in a more affluent part of town, that people from all walks of life come there. I can't stress enough, programming. We own about 50 acres of property [on the east side of town] and one of the things that may come out of our community engagement strategy is, early on, even though the parks haven’t been fully developed, having events so the community can take ownership in them right away.

In talking with the communities along the bayou and getting a better sense of some of the strengths and needs, how can the partnership support those existing residents?

We don’t plan to get in the job training business, we also don't plan to get in the affordable housing business but housing definitely will be an issue we hope to address, but by working with groups that are already doing that. We’re lucky in that New Hope Housing is very involved in the East End, they're developing their headquarters right now on Harrisburg. There's another group called Covenant Community Capital. We recently convened a group of them, just to discuss what we’re doing because there may be opportunities on the property we own to incorporate affordable housing. We tend to own, in some cases, more than than we probably need for park space and so housing could be incorporated into that.

The other thing were trying to get across is that we’re not trying to plan the East End or Fifth Ward neighborhoods.

To that point, the partnership worked with the Houston-Galveston Area Council and the Urban Institute on a few studies with the East End and Fifth Ward. What did you learn from those?

The Livable Centers study, it took in a very small stretch from Lyons Avenue to Harrisburg, but we learned about the issues that people really cared about in that area: affordable housing, health-related issues - the Fifth Ward in particular has really high levels of heart disease, obesity and so again, parks can definitely play into all of those problems.

So how does a new park serve existing communities?

I think through programming and what we develop on the site. We may have things over there that would not be incorporated into Buffalo Bayou Park. People might want a farmers market and a flea market so something like that, I think we’ll really be looking to the community to figure out what they want.

Years ago, when we were developing the Buffalo Bend Nature Park area, in Magnolia Park, we found out folks wanted parks that served inter-generational purposes. They wanted it to appeal not just to young people but also to older people as well.

Second Ward has been designated by the mayor as a Complete Community so we want to partner with them. There's been a lot of planning in the East End and in the Fifth Ward. We did the livable centers study, the management district and the Fifth Ward CDC have done a lot of work, so we hope not to reinvent the wheel.

What are some of the challenges or concerns for the partnership looking ahead to this new development? How will it be different than what you've done so far?

[Parks] have tended to stimulate residential and commercial development and tax rates go up and things like that and that’s certainly what they found along the High Line and the Atlanta BeltLine. They had pretty high goals for affordable housing and that hasn’t been achieved.

I think in all this it’s a lot easier said than done but we want to make a real effort to reach out to the community but we also want this bayou to be something for everyone. It's not just for the residents who live north and south of the bayou. People come from all over town. I think you can have a regional destination as well as a neighborhood destination and I think that’s the interesting thing about this project as it moves east it may take on a very different feel and character especially from just a physical standpoint. East of downtown the banks are much steeper, the river is wider, it's much more like a river and then there's the industrial legacy of the neighborhood.

[The partnership] owns several really interesting former industrial sites. We own four massive former gravel silos and artists have [used] that site. We own an abandoned City of Houston wastewater facility. Instead of tearing all this stuff down we want to celebrate the industrial character of the East End because it's been the manufacturing hub of Houston. It's where port industry has always been but as port industries move farther east, it's left behind these industrial remnants. And we’re just really drawn to them.

Does the funding change too? Is it still TIRZ-supported?

The [Tax Increment Reinvestment Zone] funding, for the maintenance of Buffalo Bayou Park came in the middle or towards the end. Over east of town, there’s two TIRZ funding sources and both of those entities have given us money for the master plan. They're not as wealthy as the downtown TIRZ.

We’re going to take it one step at a time, but funding is always a concern especially when it comes to maintenance.

The other thing that makes this sector of the bayou a lot different than downtown and the west sector is that a lot of the property along the bayou is in private hands. In downtown and the west side, it was all controlled by public entities. So that makes it really challenging. We worked for years to get easements from 18 individual property owners over along the bayou. As we went along and they could see what we were doing, they became more willing. We’ll really be focusing on our properties initially but we do plan to expand our land acquisition program.