Phoenix, Houston, and the Rest of the Sun Belt Cities Are Misunderstood

Cities across the South and Southwest have a reputation for being unsustainable. Maybe it's time to rethink that label. 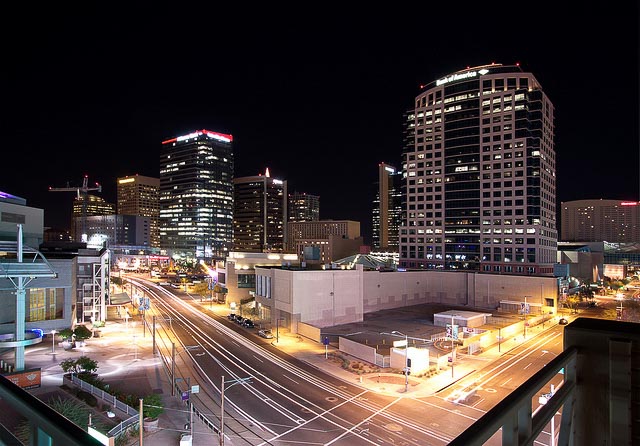 Cities across the South and Southwest have a reputation for being unsustainable. Maybe it's time to rethink that label.

The emerging urbanist ethos doesn’t have much love for Phoenix.

The sixth-largest city in the country hasn’t earned much respect from a mindset that prizes population density, public transportation and walkability.

Sixty percent of Phoenix housing is suburban-style, detached single-family homes. In Chicago, just 25 percent of people live in such homes. In Philadelphia it’s just 8 percent. And if you live in Phoenix, you drive. At least, 87 percent of its working population drives to work compared to about 58 percent in older cities Chicago and Philadelphia.

The hot topic today for cities is “sustainability.” Phoenix, by its very nature, seems pretty far from that label.

But maybe it shouldn't.

In his new book, The Future of the Suburban City: Lessons from Sustaining Phoenix, longtime Phoenix resident Grady Gammage Jr. -- an academic, lawyer, author, developer, and former elected official -- argues the city is misunderstood. The popular notion of a “sustainable” city, he says, misses some nuance, namely that all cities – whether sprawling post-war settlements of the Southwest, or dense, industrial East Coast metros – face their own set of sustainability challenges. The most important question, he argues, is how willing and able are a city’s leaders to solve them?

“Today there exists a category of American cities in which the line between suburban and urban is almost impossible to locate,” he writes, of cities across the U.S. Sun Belt like El Paso, Jacksonville, Houston, Las Vegas, Los Angeles, Phoenix and San Diego.

The common view is that these cities were “mistakes,” Gammage argues. And it’s true, he acknowledges, that those cities look the way they do because of a fleeting generational opportunity born by cheap petroleum.

“But we cannot simply abandon the suburban fabric of the last 50 years and wish that things had developed differently,” Gammage writes.

I spoke with him about his new book, his views on alternative ways of measuring sustainability, what East Coast city-dwellers misunderstand about the Southwest and how cities that look like suburbs can accommodate growth and combat climate change.

The interview has been edited for clarity and length.

I would say the premise of your book is counterintuitive to urbanist orthodoxy, with the premise essentially being, “Phoenix and cities like it are more sustainable than you think, and here’s why, from water to heat to transportation.” Is that how you’d describe the book?

I think it is counterintuitive, although that sort of annoys me because I think people should think more carefully about the nature of cities, instead of feeling cozier to a particular urban form that they read about more. I am troubled by a lot of urban writing today and its lack of analytical basis. A lot of it seems to come from an emotional basis.

I want people to understand that while I’m mostly writing about Phoenix, there are a whole lot of cities like this. Most of the post-World War II growth in urban America is in a single-family home, automobile-dominated urban environment. And to sort of blithely assume that sort of urban fabric is unsustainable seems to me to condemn the mass of post-World War II growth to some sort of bleak and unsustainable future. I just think that’s an unfair way to think about cities.

At one point early in the book, you wrote, “To live in a city named after a bird that periodically immolates itself is to invite scrutiny.” What is the scrutiny you tend to hear about Phoenix, and what does it miss? What is it that those people are not understanding about cities like Phoenix?

I think particularly about Phoenix, the first assumption that people make is, “it doesn’t rain there, people shouldn’t live there.” You hear this a lot. I heard Simon Winchester, who wrote a book called The Crack at the Edge of the World, about the San Francisco earthquake, on NPR, and he sort of says there are American cities that should have never have been built, and he cites San Francisco, New Orleans and Phoenix, and Phoenix he cites because there’s no water in Phoenix. That really misunderstands, I think, both the nature of cities, and the nature of Phoenix and cities in the arid West.

Any city is by definition a concentration of people that draws on a larger resource shed to support it. No city grows all its own food. No city mines all its own iron. No city produces all its own concrete. Things are brought to the city. And water is just a commodity like other commodities, which can be transported. The history of the settlement of the area of the United States beyond the 100th meridian is one of transporting water to where people are. And Phoenix is the exemplar of that – arguably the best example of that – because it brings its water from multiple sources and it stores a lot of water. We’re really thoughtful about this issue because we know it’s a challenge. And that the water issue is the one that go after Phoenix most often about. Even New York City moves water a great distance to get it there. A lot of people sort of blithely think that cities on the coast are fine because they’re near the ocean.

Rankings of cities by sustainability tend to focus on things like resource availability or population density. You argue a better way to measure it would be to look at the city’s track record of identifying problems and fixing them. If a city’s leadership has a history of finding solutions and making changes, it’s an indication they’ll continue to do so. What is the problem with the way people typically rate the sustainability of a place?

You should have written the conclusion to the book. I tried to unpack a lot of these sustainability rankings, and I found a lot of problems in them. A lot them have very obvious and inherent biases in them, by the people who put them together, in favor of the cities they like. And even the ones that don’t have intentional bias, tend to highly rank the sustainability of cities that are in fact either not growing or declining.

And if you think about it, you can imagine how that happens. A city that is declining in population or is static is more likely to have caught up to its infrastructure needs and challenges than one that is growing. So cities that are growing quickly, which is to say cities where a lot of people are voting that they want to live there, tend to be ranked unsustainable because their infrastructure is lagging behind their population. Well, that isn’t a real smart analysis of the sustainability of a city. And my point was to look at decision making under uncertainty, and decision making related to challenges, and whether cities are doing a good job of it.

To the argument that the best thing we could do for cities is to return to the way cities looked before the car, you write, “This is not an altogether wrong instinct, but we cannot simply abandon the suburban fabric of the last 50 years and wish that things had happened differently.” If we stipulate that we can’t wipe the slate clean, because millions of homes have been built, what should happen in these places? What is the future of the suburb?

Part of the answer is rethinking transportation, and figuring out how best to introduce transit and non-automobile transportation into the suburbs. The dilemma of that being this problem of the last mile that transportation planners talk about—we can have buses, we can have bus rapid transit, we can have light rail transit – but as long as people are going to live in detached single family homes, they have to get from those homes to that transit. I’m pretty optimistic that the future of the automobile solves that problem with lighter, probably mostly electric, perhaps largely autonomous vehicles that make it possible for the single-family home fabric to survive. I really think cities ought to be getting much more aggressive about planning a mixed transportation option of autonomous vehicles and smaller lightweight vehicles.

The other part of it is figuring out how to densify existing single-family home suburbs by allowing extra units to be built on the back, to allow the conversion of part of the home to additional dwelling units, and so on. And that’s going to be a real challenge – it’s a political challenge for cities, and it’s a legal challenge because there are so many subdivisions covered by covenants that are intended to freeze the way the place looks in the way it looked the day it was built and not allow it to adapt. That’s something we have done over the last 50 years that’s really contrary to the notion of the way cities grow and adapt over time.

On both housing and transit, you really argue for embracing a sort of incrementalism, where things aren’t going to change dramatically, and it’ll be OK if sprawling, post-wart cities like San Diego, Los Angeles and Phoenix get gradually more urban over a number of years.

Incremental changes are the way people live in suburban cities. We thought before the crash of the early 21st century there was going to be a huge demand for people in Phoenix to live in high-rise condos. We approved lots of them in various parts of town. Again I think that was a misunderstanding of the incremental way cities change over time. There is demand for more of that than there used to be, but there’s demand for a whole range of things that are one and two notches more dense than the quarter acre lot.

I think the challenge of sustainability – the challenge isn’t geography, or climate, or rainfall. It’s about politics. Ultimately, the sustainability of any place is decided by the quality of the decisions that are made and the commitment that the people who live there have about managing the future. One challenge that worries me the most about a place like Phoenix it is an inclination towards believing that the hard decisions were all in the past and we don’t have to make them into the future, and about the political dysfunction of a place that dislikes collective action.

That’s the problem in the Western U.S. – not that it doesn’t rain, but that we think of the Western U.S. as a bunch of rugged individualists doing their own thing, and it’s not! That just isn’t true. It isn’t how we’ve made it work in the past and we need people to understand and recognize that and continue to make intelligent collective decisions about managing the future going forward.