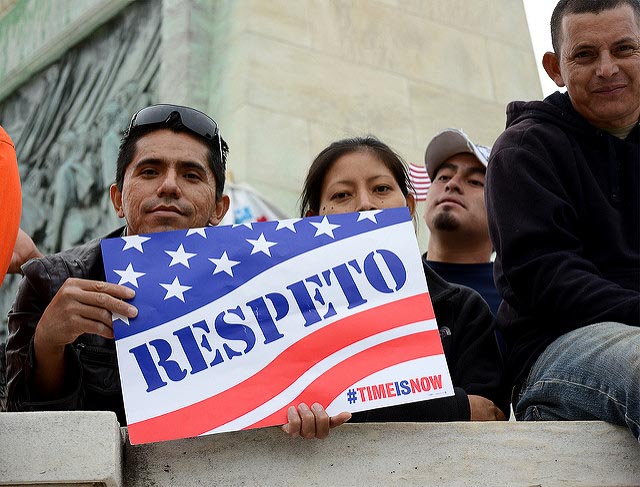 This post is part of the Urban Edge blog's in-depth coverage of the 2017 Kinder Houston Area Survey.

In the lead-up to the August announcement that Houston would be, like so many others across the country, a “welcoming city” to undocumented workers and immigrants, the city had already proven itself in many ways.

It earned frequent headlines as the region with the most resettled refugees annually, and it gained attention as a place with a diverse immigrant population that has reshaped the region, even as the state has pursued anti-sanctuary city policies meant to punish any jurisdictions that don't cooperate with the federal immigration agents.

“Houston has made up its mind,” said Stephen Klineberg, founding director of the Kinder Institute for Urban Research. “This city is increasingly prepared to accept and even to celebrate its burgeoning diversity.”

The continued growth in positive attitudes toward immigrants – which survived the recent election rhetoric and anti-immigrant efforts of the Trump administration – is thanks largely to a younger generation of Houstonians that is more diverse and more comfortable with diversity than older generations.

Interestingly, unlike other high profile social issues, like gay rights, where changing public opinion has occurred over time within generations, much of the positive feeling toward immigration in Houston seems to have come from folks who already had their minds made up, explained Klineberg, who tracked decades worth of responses to the Kinder Houston Area Survey.

“We can take advantage of these 36 years of systematic surveys,” said Klineberg. “We can ask the question: have people actually changed their minds in light of new experiences? Or are the changing attitudes in the overall population due to younger generations replacing earlier ones and coming into the public arena with different views?”

Every year, the survey asks respondents a constellation of questions around the topic. Do immigrants contribute more to the economy than they take? Should the country keep accepting the same number of immigrants, or should it admit fewer? Does immigration strengthen or threaten American culture? Should undocumented immigrants without criminal records be granted a pathway to citizenship? Across the board, Houstonians’ attitudes have grown more positive toward immigrants in recent years.

A deeper dive into the data reveals how, exactly, that’s been happening. It turns out baby boomers aren’t changing their minds and becoming more accepting of immigration. Klineberg explains that another social issue of our time – attitudes toward gay rights – saw baby boomers gradually become more accepting. But that didn’t happen with their attitudes toward immigrants.

In particular, white members of the baby boom – who represent an aging and decreasing percentage of the Houston area’s overall population – remained consistent in their opinions toward immigrants. In other words, said Klineberg, “We older Anglos grew up in a different world.” To many of them, he said, the old status quo of a largely white Houston seemed “right and natural.”

Instead, what’s happening is that the younger generations are more supportive of immigrants, and they are replacing the older residents, who are declining in numbers. For example, 37 percent of the baby boom generation and 35 percent of Gen. Xers felt immigration into the country mostly threatens American culture, but only 13 percent of millennials agreed.

“That’s absolutely, completely what you would expect,” said Jeronimo Cortina, a political science professor at the University of Houston. “Older folks grew up in an era where racial divisions were pretty obvious. Those who were raised in the 1950s 1960s are people that are not used to a multicultural, diverse city or nation.”

He’s seen the transformation in his own lifetime, from being one of only two Mexican students in his San Antonio high school. “Nowadays, if you go to a high school,” he said, “you’re going to find the complete opposite.” For those high school students, “it’s something normal.” But for older generations, “it is a change in their own world view.”

The conversation around immigration is also racialized, so questions about immigration can also reflect attitudes around race and diversity in general.

“At the end of the day, if there is not an open mind and not a good perception about accepting or respecting the other, the foreigner, I think it will be very difficult for refugees and immigrants alike,” said Ali Al Sudani, director of refugee services for Interfaith Ministries, a Houston nonprofit and refugee resettlement agency.

“I think the key is educating them,” he said.

That’s not to say some members of older generations aren’t supportive of immigrants and refugees. Al Sudani praised his organization’s volunteers, many of who are from older generations. And he’s seen the number of interested volunteers of all ages increase since the election, affirming the Houston is, he said, a welcoming city.

As far as Houston’s diversity – Klineberg says it’s a done deal, there’s no going back. And Houston seems to have made up its mind about it.