A new report measuring the damage done to America’s creative economy by COVID-19 shows the South, Texas and Houston are among the most devastated. At the metropolitan level, the Houston area is the largest metro suffering the worst losses.

A new report measuring the damage done to America’s creative economy by COVID-19 shows the South, Texas and Houston are among the most devastated. At the metropolitan level, the Houston area is the largest metro suffering the worst losses.

A new analysis of creative industries from the Brooking’s Institution estimates the COVID-19 crisis will result in the loss of 2.7 million jobs and more than $150 billion in sales of goods and services nationwide between April 1 and July 31. That’s almost one-third of all jobs and 9% of annual sales in those industries, which include the fine and performing arts; film, television and radio; advertising; and fashion, among others.

Hardest hit, according to the study, will be the fine and performing arts industries, with an estimated 1.4 million jobs lost and $42.5 billion in sales. The estimates “represent 50% of all jobs and 27% of all sales in those industries,” which primarily employ “musicians, dancers, actors, promoters, booking agents, and others for whom live performances are the driving force of their work and income.”

The largest states — California, New York and Texas — will be hit hardest in terms of absolute losses; however, smaller states like Alaska, Nevada, New Mexico, Louisiana and Hawaii will experience the largest share of losses.

It’s estimated that more than three-quarters (80%) of all the lost sales and two-thirds (68%) of all job losses in creative industries will occur in the 53 metropolitan areas with populations over 1 million — which include Houston, Dallas, San Antonio and Austin. Combined, the nation’s top 10 metro areas account for 55% of all losses in sales and 37% of all jobs lost in the creative industries, according to the report.

The worst total losses will be in New York (283,857 jobs / $28 billion) and Los Angeles (225,986 jobs / $25.3 billion), but, the authors are careful to point out, in percentage terms, larger losses will be seen in smaller metro areas, many of which are in Sun Belt states — Las Vegas, Nashville, Tennessee, New Orleans, Orlando, Florida, Memphis, Tennessee, Jacksonville, Florida, Tucson, Arizona, and Austin. When considering the percentage change in estimated losses for the creative industries, New York City falls to 28th place and Los Angeles to 45th. Houston, on the other hand, drops just five spots, from No. 13 to No. 18, making it the largest metro suffering the worst losses — 32.5% decrease in jobs and a 10.6% drop in sales in the four-month period.

Florida and Seman included a total of 95 industries spanning arts, culture, fashion, design and more, and 65 occupations in their analysis. They also counted all employees — full-time, part-time and freelance — within the industries, including those in noncreative jobs such as receptionists, accountants, graphic designers and music promoters. The industries employ 8.8 million workers and generate over $1.7 trillion in sales annually ($142 billion a month), which represents 4% of annual sales of goods and services in the U.S. “Creative occupations employ 7.6 million people nationwide, paying almost $42 billion in monthly average earnings. These figures represent 4% of total employment and 15% of monthly average earnings nationwide.”

As of Aug. 2, spending on arts, entertainment and recreation by U.S. consumers had decreased by 51.3% compared to January 2020, according to Opportunity Insights’ Economic Tracker. In Texas, the decrease was 53.9%, and in Houston, it was down 60.5%.

According to economic impact data from the Houston Arts Alliance, the Houston Chronicle reported the arts and entertainment industry in the region has a 50% unemployment rate and “arts organizations expected to see about $75 million in lost income and more than $10 million in lost donations.”

What can be done to save these industries?

Band-Aids won’t stop the bleeding, according to the authors of the Brookings report. Instead, “a substantial and sustained national creative-economy recovery strategy is required. This strategy must be bottom-up, but supported across the board and led by local public-private partnerships between municipal governments, arts and cultural organizations, economic development and community groups, philanthropy, and the private sector, with support from federal and state levels of government, national philanthropy, and large corporations.”

Organizations also need technical support to help them find ways to adapt their business models and deal with ongoing restrictions on live performances.

“It’s admirable what’s now online, but we are lacking those shared experiences,” Houston Ballet Executive Director James Nelson told writer Sandra Cook for an Urban Edge story about the pandemic’s effect on those who make art and art lovers alike in Houston. “That goes for all live events — sports, arts, festivals, all of that. The importance of experiencing those moments with others has hit home.”

An additional problem with digitizing arts programs, according to the Houston Arts Alliance, are financial disparities and the gaps that exist in access to technology for smaller, underserved organizations, which struggle to “monetize and optimize” digital programs. 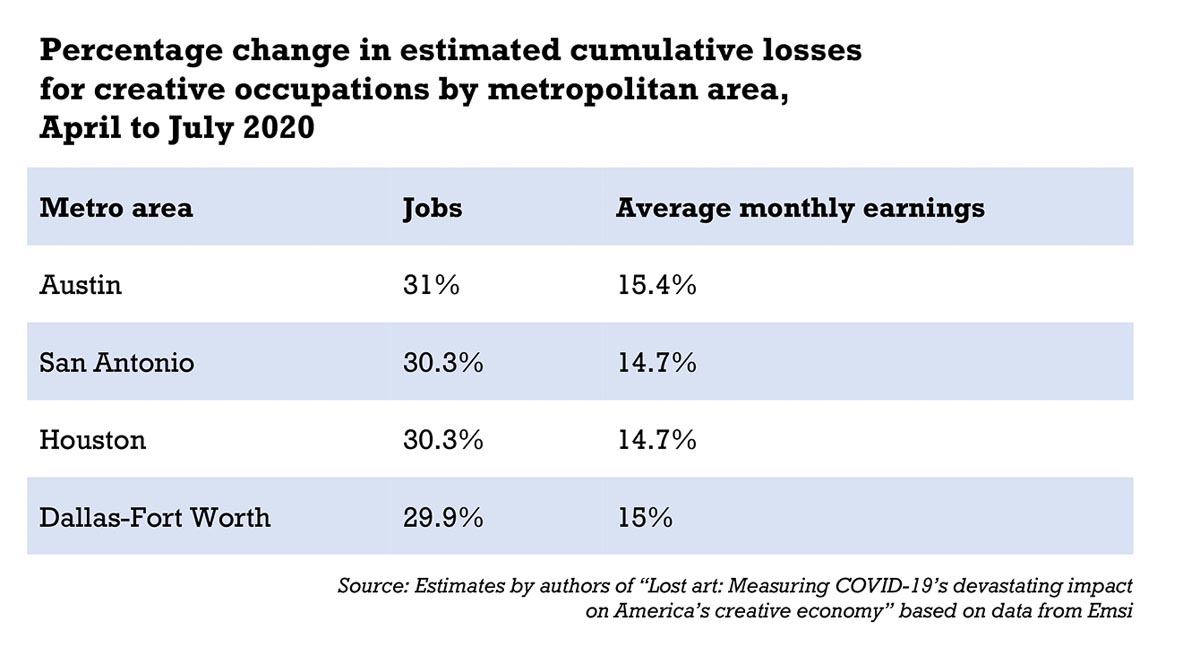 Both visual and performing arts organizations reported the need for new business models, as well as advocacy and financial support. Many local arts organizations are concerned about funding for the fiscal year 2021, especially considering the sharp decline in funding from the Hotel Occupancy Tax (HOT). Houston’s percentage of HOT funding that goes to the arts is the highest in the state. Much of the arts community in Houston — and cities across the country — relies on philanthropy to stay afloat.

“It’s not as if there’s a guarantee that when this is all over that we can just press reset and we all come back with the ability to do the work we did before,” Nelson said. “What people may not understand, unless they’re closely connected with an arts nonprofit, is that it’s often a very delicate situation even in the best of times. We are not a profit-generating industry. To do what we do for our community is always a struggle. The ability to do that relies on a combination of earned revenue and contributed revenue, and that’s very tenuous even at the best of times.”

As Florida and Seman, the authors of the new report, indicate, the philanthropic sector, in general, has stepped up its funding. And the federal CARES Act allows self-employed creative workers to access federal assistance. As of late June, almost $250,000 in assistance had been provided by the Greater Houston Area Artist Relief Fund. The Disaster Resilience for Artists and Non-Profits website set up by Houston Arts Alliance provides information on a number of resources and strategies to help during the pandemic.

Like many restaurants that have been forced to pivot during the economic shutdown and reductions in service, local artists and designers have been using their skills in other industries, such as making masks.

In the absence of touring shows, bands and festivals, the Brookings report also recommends communities shift to locally sourced culture and develop strategies “to hire local creatives and create online portals and platforms to allow residents and businesses to hire local artists, musicians, and performers for smaller-scale, local events.”

The suggestion parallels the call from James Nelson of the Houston Ballet to get creative in the approach to surviving the coronavirus now and in the foreseeable future:

“It’s important for all us in performing and visual arts to understand (we have) to learn and adapt to how our industry will be forever changed.”