In Houston, the Land of Megachurches, Religious Service Attendance Declines 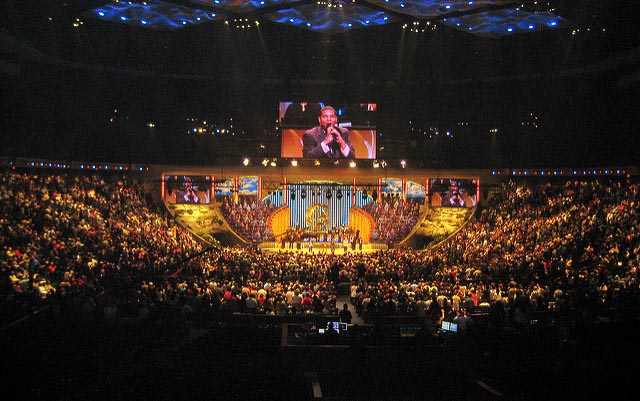 Houston – by any account – can reasonably be considered the megachurch capital of the country.

The city has 37 megachurches, according to an analysis of data compiled by the Hartford Institute for Religious Research.

That's way more than any other city. Combined, those churches have an average weekly attendance of more than 640,000, or roughly the population of Nashville, according to that database.

Moreover, Houston's home to the country’s biggest, and perhaps best known megachurch: Lakewood Church, which welcomes 43,500 congregants each week to a facility that once served as home of the NBA’s Houston Rockets.

And yet, despite Houston’s well-known association with the biggest and most well-known churches in the nation, fewer residents than ever before are attending religious services regularly.

This year, only 45 percent of Houston-area residents polled in the Kinder Houston Area Survey said they attended a religious service (other than a wedding or a funeral) in the last month.

That marked a major milestone for the region: for the first time in the survey's 35-year history, the majority of Houstonians aren't attending religious services regularly.

Yet Houston's not alone, and in fact, its patterns mirror national trends.

Regular religious service attendance in Houston has been on a steady decline since 2009, when 64 percent of Houston-area residents said they had attended services in the last month.

Nationally, a similar decline is also occurring -- but the steady, downward progression began earlier, around 1998, according to Gallup survey data. That year, 62 percent of Americans said they attended church or synagogue at least once per month. By 2015, the figure had fallen to 47 percent.

(It's worth noting that the question wording differs between the Houston and national polls -- see chart above -- but it's useful nonetheless for putting Houston data in a national context).

Experts widely attribute this trend to several factors, including shifting preference of Millennials and a rise in the number of people who identify with no religion. Today, for example, 18 percent of Houstonians don’t identify with any religion. That’s a record high, and three times the rate it was in 1982.

Again, a similar pattern is unfolding nationally, with an increasing rate of Americans saying they aren't affiliated with a specific religion. From 2007 to 2014, the percent of Americans who identified as atheist, agnostic, or "nothing in particular" rose from 16.1 percent to 22.8 percent, according to Pew data. That makes them a huge portion of the population, roughly equivalent in size to the evangelical population and larger than both the Catholic and mainline Protestant populations.

But there's an interesting footnote to the story: even though a declining portion of Americans are attending religious service and calling themselves Christian, there doesn't seem to be a dip in "spirituality."

Fifty-three percent of Americans called religion "very important" in their lives in 2014, down just 3 points from 2007, according to the Pew survey.

The figures were similar in Houston. "The rise of the 'nones' does not mean that religious or spiritual sensitivities are disappearing from the Houston scene," according to the Kinder Houston Area Survey's newly-released report. "Six out of 10 (59 percent) of all area residents in 2016 said that religion is 'very important in my life,' a number that has remained unchanged across the 35 years of this research."