The education—and miseducation—of an urban planner

James Rojas has spent the better part of his career reconciling his formal training with his lived experience as a Gay Chicano.

James Rojas has spent the better part of his career reconciling his formal training with his lived experience as a Gay Chicano.

This article was originally published on Common Edge.

Urban planners take pride in knowing, not feeling, communities. Emotion is generally not part of their toolkit. In fact, it is often actively resisted. Most planners are trained to work in an abstract, rational tradition, thinking about cities in head-heavy ways and using tools like maps and data to understand, explore, and regulate the land and its people. This rigid understanding of communities, especially nonwhite ones, creates intrinsic problems, because planners apply a one-size-fits-all approach to land use, zoning, and urban design. Not truly listening to these communities, or even simply allowing for other ways of being, has led to long legacies of conflict, trauma, and oppression. Our urban inequities are not accidents. They’re products of design and intention.

In stark contrast to planners, architects, and other credentialed experts, most people experience cities in profoundly tactile ways, through their senses and emotions. The building blocks of cities comprise more than structures, streets, and sidewalks, but equally encompass personal experience, collective memory, and aspirations. While less tangible and more difficult to measure, these aspects are what transform infrastructure, mere physical objects, into place, a sense of belonging—community. And yet these more ephemeral ways of understanding are discounted within conventional planning practice and education. The result is an acute distrust between planners and the public. As a planner of color, I have had to expand my rational education with personal experience, in hopes of developing a practice that embraces the feelings I have encountered my entire life.

Truth be told: A large part of my career has been spent reconciling my formal education with my lived experience as a Gay Chicano. Looking back now, I feel as if I’ve had to relearn much of what I was born into. My journey is in some sense a circular one leading back home. Growing up in Los Angeles during the 1960s and ’70s, I had an emotional attachment to African Americans. Whites were the disciplinarians: Irish nuns, teachers, authority figures like the L.A. County sheriffs. Black culture provided us a way to feel the world through play, laughter, music, dance, and stories.

I grew up in Boyle Heights and East Los Angeles, two neighborhoods located close to Black South L.A. From downtown’s bustling retail district to the manufacturing plants of Vernon, working-class Blacks and Latinos shared these spaces and sometimes neighborhoods. South L.A. was where we played with the Black kids when we visited family friends who lived there. The uniform blocks of Spanish homes, ample yards, and palm-tree-lined streets were better designed than our ragtag Eastside blocks. When we visited this family during the Watts Riots, an eerie silence engulfed the block. The front-yard playgrounds had become demilitarized zones. A woman timidly came out of her home to warn us of snipers. As we drove through the neighborhood, we saw soldiers, an occupying army, stationed on random street corners. It was my earliest urban planning lesson on agency, ownership, and state control.

In my teen years, Black disco music, flamboyant fashion, and dance helped me find my sexual identity and place when I came out. The macho Eastside landscape was a hard place for queer youth to find a safe space to be ourselves. Instead we would take the bus from the Eastside to downtown L.A. At the 5th and Hill bus stop, we would be joined by African American youth making the same journey from South L.A. to a Hollywood club. In the back of the bus, the engine would groan, and the Black and Latin queens would strain to talk smack over the noise. This was my community, and from the back of the bus, we owned the city.

My connection to design really began in the clearing house basement of the grand old May Co. Department Store, where I worked. Checking out who was going in and out of the men’s room, and shooting the breeze between sales with my gay African Americans clerks, was how we passed the time. Located in the predominantly Black section of L.A.’s Broadway shopping district, May Co. was where I was introduced to the retail gay scene and found a new freedom walking down this vibrant street. By experiencing the subtleties of the world from a queer eye, this led me to study interior design at Woodbury University, where I learned the interplay between emotion and form that shaped our environment.

After graduating, I couldn’t find a design job. Much to everyone’s surprise, I joined the Army and was stationed in Germany. It was a bizarre experience, combining fear, confusion, and joy. While the buildings we stayed in were a reminder of a failed Nazi past, the barracks inside was where Dixie lived: large Confederate flags hung on the walls over some of the soldier beds. Once again, I found a safe space with gay black solders as we explored the cities and cruised the clubs. This is where I expanded my thinking of cities and public space.

Back in the U.S., I began studying urban planning at MIT and immediately hit a wall. The program sucked the joy out of cities, because it relied almost entirely on quantifying the world through rational thought. Much of that is indeed important. I just knew in my heart that there were limitations to that approach, but I lacked the critical tools at the time to mount much of a defense. Perhaps worse still, there were no cohorts, no cronies, no peanut galleries to fall back on. I had entered a harsh, Puritanical world. So I joined the department’s Students of Color group and discovered the politics of public space. I met with professor Donald Schon, who—when I complained about the overabundance of rational thinking at the school—told me, “MIT receives a lot of its funding from the Department of Defense. There is no logic to war.”

As professors lectured on the boulevardiers, the generic white folks they would draw into renderings, I would sit in class, and wonder: Where do I fit in, as a Latino? Is East L.A. a good place or a bad place? The numbers, the data, the logic—all seemed to suggest that it was an underserved, disadvantaged place. Perhaps a bad place, rationally speaking, but I felt a strong emotional attachment to it. On trips home, I began to do field work in my old neighborhood, cruising the streets of East L.A. with my dad, interviewing and photographing people on the streets, on their front yards and porches, listening to their stories, so I could begin to tell others as well as my own. Back at MIT, I sought help from outside the discipline, talking to professors in anthropology, architecture, and environmental psychology to help me understand what was happening in these public spaces. When the great urban anthropologist Lisa Peattie told me, “Write about what you know,” the advice gave me permission, unlocking an approach to space that I continue to use.

All of which leads me back to my planning work today. I still use a version of this research to help give communities a voice, through story and space. After conducting more than 1,000 workshops, I’ve learned that there are essentially two types of community engagement: information sharing (transactional and quantitative in nature) and knowledge producing (qualitative, ethnographic, and sensory based). Information sharing is the most common: agencies, municipal governments, planning firms, and advocacy groups use it to inform the public about issues, programs, plans, and sometimes get feedback. We’re all familiar with transactional engagement. It’s what the planning profession specializes in; it’s what I was taught to practice at MIT.

Knowledge producing is a deeper form of engagement that taps into people’s lived experience, emotions, and imagination. Our interactive urban planning workshop—Place It!—always starts with a crucial first step. We believe authentic community engagement, especially for underrepresented communities, should begin with a healing process that recognizes people’s daily struggles and feelings. It is only by exploring our feelings and confronting the inequities that pertain to race, class, gender roles, sexual orientation, age, immigration status, and ethnic identity that can we uncover knowledge, create a unified voice, encourage self-determination, and begin the planning process. 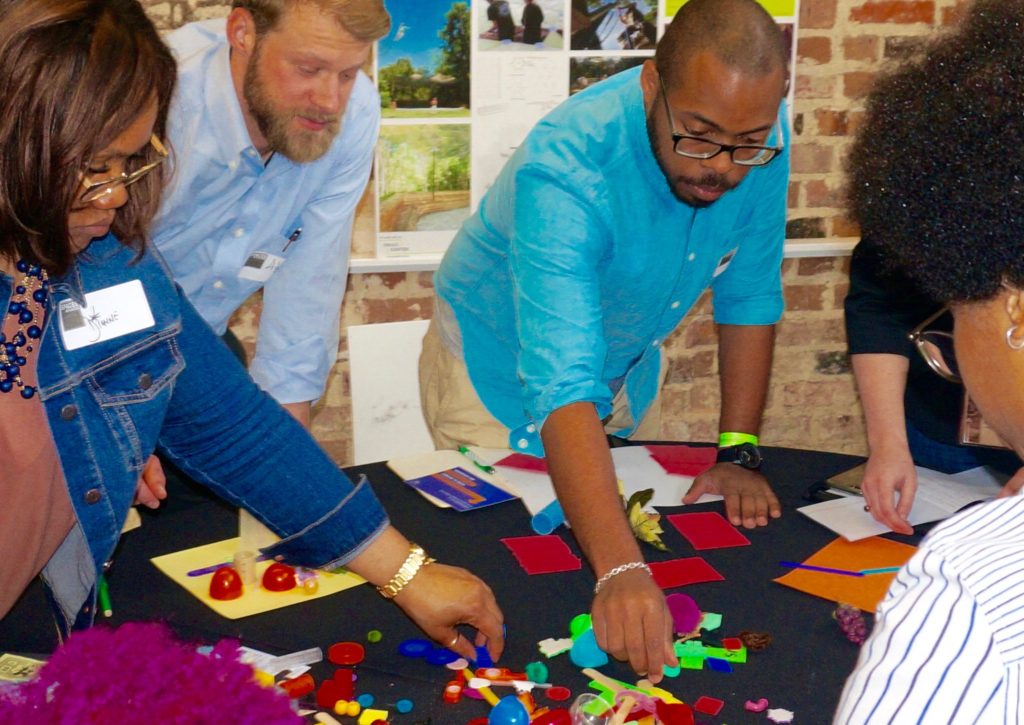 Our workshops are designed for people who would never attend a public meeting, let alone speak out at one. It is largely based on nonverbal methodologies that use objects, storytelling, and play to inspire visual and spatial thinking. We want to discover the things that viscerally connect them to their homes and neighborhoods. What pulls them out of bed in the morning? What’s the social and emotional pattern language of a community? How do culture, climate, geography, technology, and activities shape people and their public spaces? These exercises reveal the physical and emotional connections to place, capturing details and patterns of public space often overlooked by traditional quantitative approaches, such as maps and graphs. Participants quickly realize that they possess a singular expertise that suspasses anything that credentialed experts can provide; after all, who knows and understands their community better than them? This is an extremely empowering realization.

Having said all that, I know that quantitative research remains important. Some things do need to be plotted, mapped, and measured. But these metrics alone don’t provide a full portrait. Oftentimes they serve a more nefarious purpose, acting as perimeters for future development. Having people use their own hands and build their own stories ensures that we are expressing feelings. The goal is to create a vision for the future that respects their past and shows them how their lives and actions can shape policy and infrastructure (rather the other way around). That kind of engagement can’t happen without direct input from the community: at the bus stops, on the porches, in the front yards, in the beauty shops, on the dance floors. They’ll tell you what matters.

James Rojas is an urban planner, artist, community activist, and educator, who has developed a hands-on community engagement practice that uses storytelling, objects, and play to help individuals and communities reflect, collaborate, and find their core values. Currently he and John Kamp are writing a book for Island Press on community engagement.