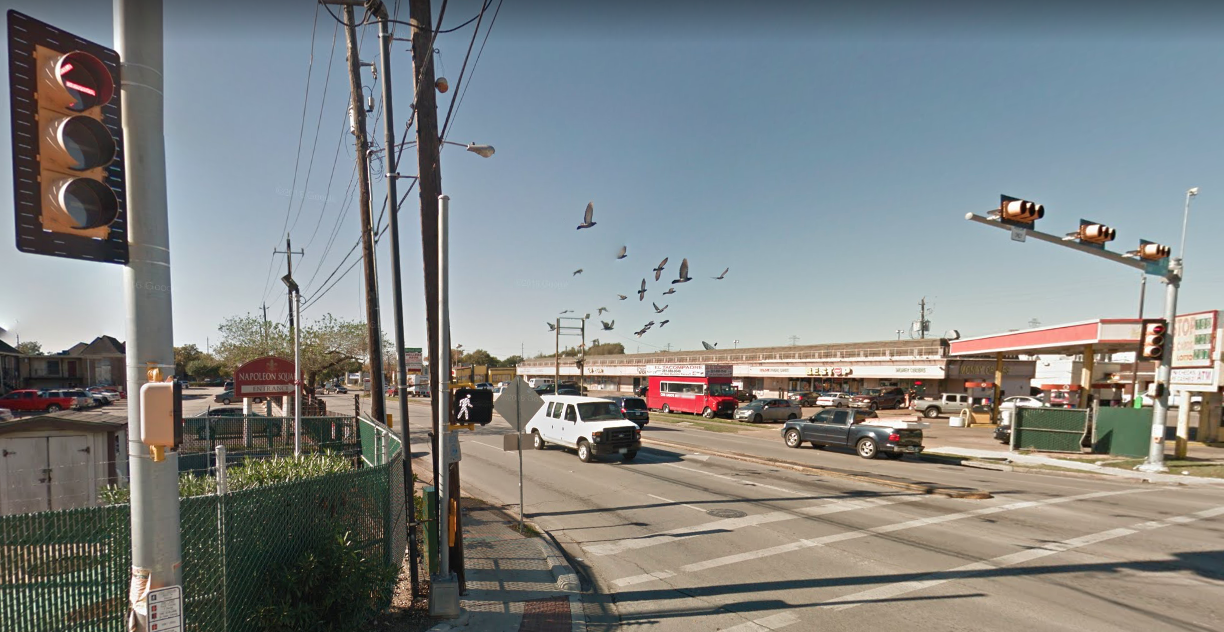 It was already 90 degrees when I joined 15 other volunteers at the Southwest Multi-Service Center in Houston’s Gulfton neighborhood at 9:00 a.m. on May 19. We were tasked with walking the streets of one of Houston’s densest, most immigrant-rich neighborhoods to assess everything from sidewalk quality to intersection safety. Reflective of Houston’s famed diversity, the community is home to some 40,000 residents and 50 spoken languages. For pedestrians, however, Gulfton is also one of the city’s most dangerous areas. Between 2010 and 2017, 149 people were either killed or injured while walking through Gulfton, according to data from TxDOT. Canvassing the neighborhood recently, it was easy to see how things like infrastructure and a lack of mobility resources can adversely impact daily activity in communities like Gulfton.

I began my assessment at the corner of Chimney Rock Road and Gulfton Street next to Burnett Bayland Park. Equipped with a clipboard, tape measure and a bottle of sunscreen, I quickly noticed that the sidewalk was uneven, beset with numerous gaps and cracks that nearly caused one of my fellow volunteers to trip. Mothers with strollers leaving a soccer tournament at the park faced a more difficult challenge, dodging shrub overgrowth on their left-hand side while simultaneously ensuring that their children did not venture too close to the curb. This poor sidewalk condition persisted across most of the streets I observed.

As I turned onto Alder Drive, I met two residents who considered the sidewalk so unusable that they walked down the middle of the road. “Every time I go to the scrap metal yard, I have to use the street,” one of the men told me. “My shopping cart won’t roll on the sidewalk.” Indeed, among 156 street segments our volunteer team assessed of the neighborhood’s 483, nearly 75 percent of sidewalks had major trip hazards.

Many roads in the area lacked sidewalks altogether. As I ventured towards South Rice Avenue, I had no choice but to walk through the middle of multiple side streets, which, while less busy than some of the area’s larger thoroughfares, still received a steady flow of cars. One woman I encountered expressed concern that her dog would unknowingly wander into traffic during a casual midday stroll. The discernable fear various residents had for their pets’ and children’s safety highlighted the significance of poor mobility infrastructure to the wellbeing of Gulfton residents.

Commuters driving through the neighborhood were also affected by the lack of safe street infrastructure in Gulfton. With the high number of people walking in the neighborhood—gaps in sidewalks, the lack of marked crosswalks at intersections and the lack of bike lanes present safety hazards not only for pedestrians but also for car drivers. As I crossed from the west side of Chimney Rock to Elm Street, I had to hurry across the intersection, which lacked a light and crosswalk, to avoid interfering with approaching automobiles. This near-miss incident not only influenced my experience as a pedestrian, it caused oncoming motorists to slow down unexpectedly.

Though I was walking down Glenmont Drive, I also reflected on the fact that people riding bicycles were especially prone to collisions with cars and trucks. Bikers had to share the road with drivers and oftentimes could not keep pace with the speed limit, creating congestion and repeated tailgating. Given that past surveys conducted by the Kinder Institute and other academic institutions indicate that near-miss incidents between cyclists and drivers can deter cyclists from biking in the future, the dangerous interactions I witnessed could alter the transportation habits of Gulfton residents.

During the end of my three hours in the neighborhood, I was both disheartened and inspired by the findings of our team’s assessment. The Gulfton residents I met were just a few of the many individuals who risk their life as they walk through the neighborhood without safe street infrastructure that residents in Houston’s wealthier areas might take for granted. That nearly 70 percent of examined walkways in the community had almost no shading, 43 percent lacked sidewalks, and 98 percent had no pedestrian-level lighting highlighted the dire need for increased funding of the city’s low-income areas.

“It’s important that the Gulfton community has a well-maintained, pedestrian-friendly neighborhood," said volunteer Tonye Jack-Carlton. "It’s one thing to look at the statistics on paper but walking through the streets, you feel the sense of urgency. These are not just numbers.”

Improving pedestrian safety in Gulfton is especially pressing given the vibrancy of street life in the area. Sixteen percent of Gulfton households are without a vehicle compared to the city average of nine percent. During my time in the community, I saw families walking to and from the local park, mothers carrying groceries down busy boulevards and friends chatting on public benches. Another volunteer, Juan Antonio Sorto, commented on how many passers by greeted him with a "hello" as he walked the neighborhood. A community with such active street fronts needs more robust mobility infrastructure that can accommodate its needs.

Mayor Sylvester Turner included Gulfton in his Complete Communities initiative aimed at revitalizing disinvested neighborhoods around Houston. In the initiative’s draft Gulfton Action Plan, safety is highlighted as a major concern for the neighborhood. Accordingly, the plan has recommended the installation of new street lights, improved sidewalks, speed bumps, and bike lanes. But more can be done to further understand communities’ needs in prioritizing these initiatives. Kinder Institute’s continued work can reveal which specific areas in the neighborhood require the most assistance. Although our team must account for many more segments, these preliminary efforts have illuminated the need for safer street infrastructure in Gulfton and will enable planners to implement more geographically targeted policy interventions.

Gabriel Malek is an undergraduate student at Yale University and participated as an intern with the Kinder Institute in May, 2018.