Texas' largest metro areas are credited for 85 percent of the state's overall growth since 2010. 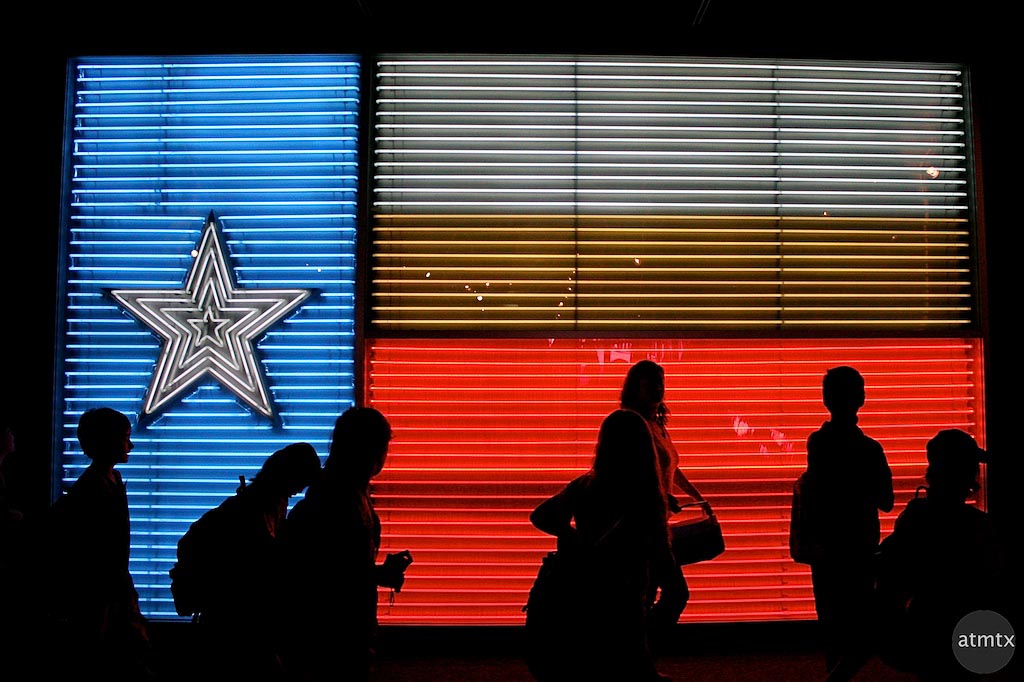 Texas' largest metro areas are credited for 85 percent of the state's overall growth since 2010.

As we reported Friday, the latest Census numbers on population growth for counties across the nation showed mostly good news for Texas, as the state had four of the top 10 counties for numerical population growth last year, including Harris County. But a deeper dive using the Census’s county data from 2010 to 2018 gives a more nuanced view of what’s going on, and it’s not all good for Houston and especially Harris County.

First, Texas’s massive population growth – which has averaged more than 400,000 persons per year for the entire decade – is concentrated almost entirely in the so-called “Texas Triangle”. That’s the four metropolitan areas that drive the state’s economy: Houston, Dallas-Fort Worth, San Antonio, and Austin.

But second, if you break down that growth you can see that DFW has eclipsed Houston in population growth over the past three years – a huge shift from earlier in the decade. The drop in the growth rate has been especially pronounced in Harris County.

Texas has 254 counties, of which 35 are located in the so-called Triangle – the four big metropolitan areas, Austin, Dallas, Houston and San Antonio, that form a triangle in the central and eastern part of the state. They have most of the state’s jobs and they are driving population growth in dramatic fashion.

And the other counties – mostly in rural Texas – aren’t just growing slowly. Many aren’t growing at all. More than 90 counties in Texas have actually lost population since 2010 and another 70 or so have added less than 1,000 people, which is an average of a little more than 100 per year. 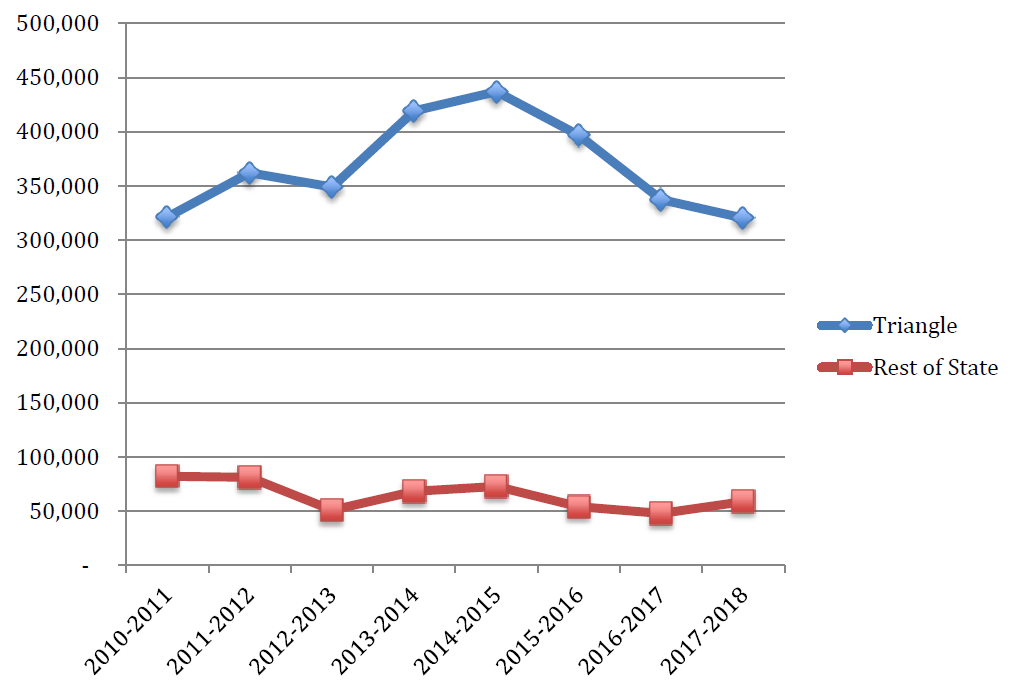 You don’t have to be a genius to figure out that 2015 was the year that oil prices fell from $90-something per barrel to $40-something per barrel, meaning Houston’s job growth stagnated during that time. The good news is that Houston is still growing significantly in spite of the oil bust. After all, 90,000 new people per year is nothing to sneeze at. 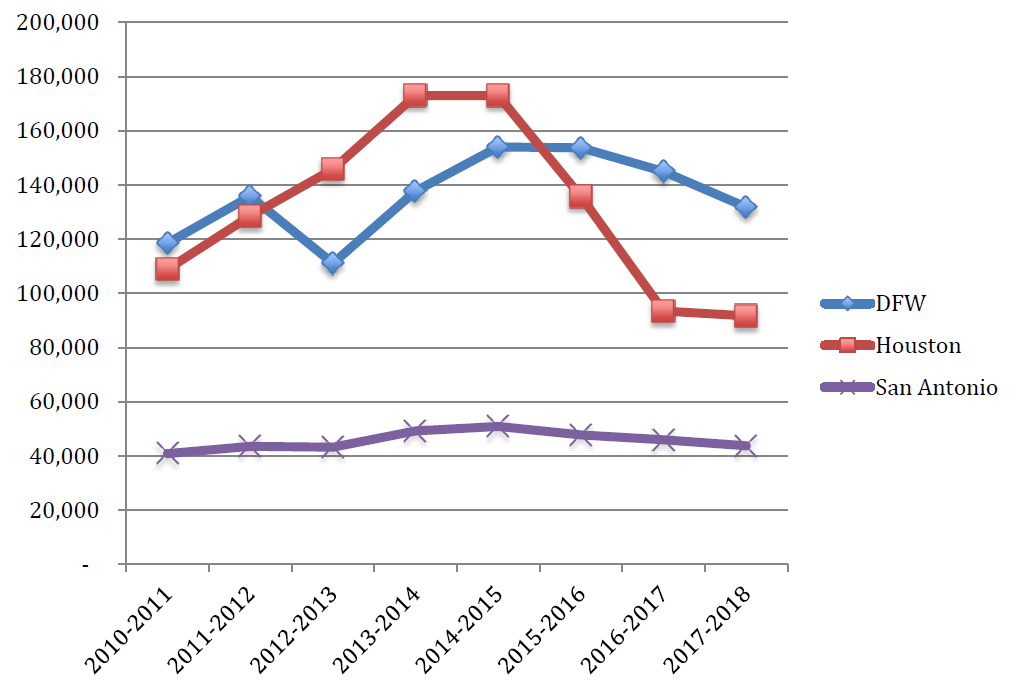 As recently as 2015, Harris County was adding 100,000 persons per year to its 4 million-plus population base. For the last two years, that number has dropped to around 35,000. This is still a big increase – third nationally behind the counties around Phoenix and Las Vegas – but it’s a huge drop. In fact, Harris almost got beat last year by Collin County, home to Dallas suburbs Plano and McKinney.

By contrast, Houston's suburban counties – Montgomery and Fort Bend – did not see their population growth nearly as much. Fort Bend has dropped from about 30,000 to 21,000 per year, while Montgomery has held steady at about 18,000 per year. That could be because of job growth in the suburbs – especially Montgomery County, which is proximate to the new Exxon-Mobil campus – or it could simply be the region’s dynamics. As we reported last year, migrants to the region tend to move to Harris County, but most people who leave Harris County go to suburbs in Fort Bend and Montgomery counties. It could be that fewer people are coming into Harris County from elsewhere in the country and the nation, but people are still moving to the suburbs at the same rate. 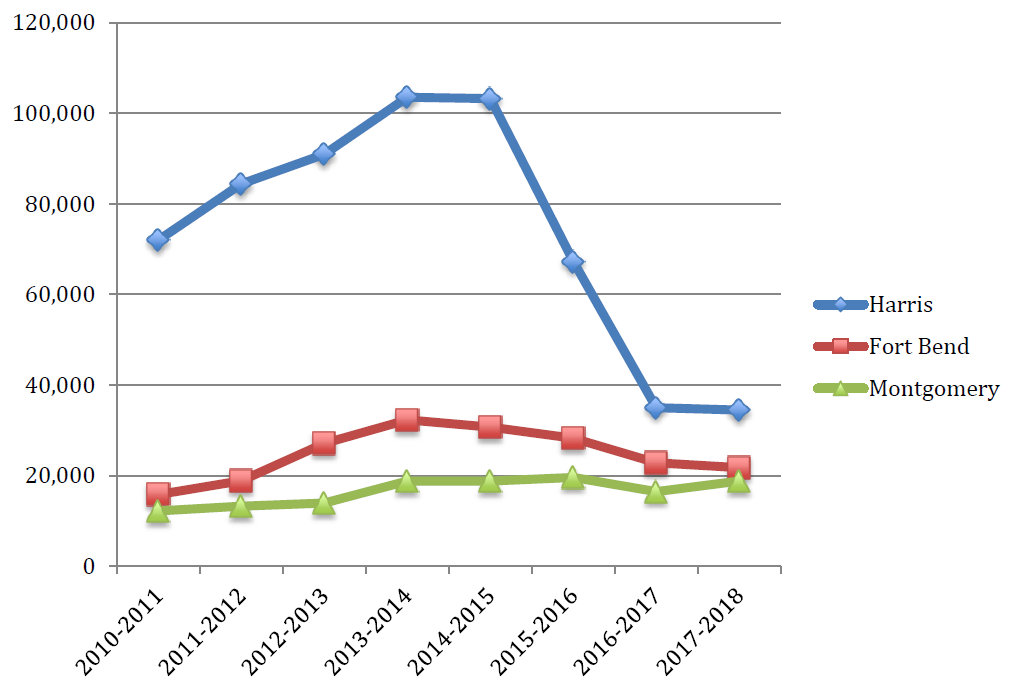