Friendswood, a close-knit suburb southeast of Houston that routinely makes lists for being the “best place to raise a family,” also serves as a case study for how flaws in the federal approach to flood insurance and disaster recovery aid resulted in fractured outcomes even among similarly situated middle-class neighbors after Hurricane Harvey.

In particular, the role of flood insurance and how climate risk has been mischaracterized lead to disparate outcomes—relatively quick recovery and growing wealth for some while others face severe financial consequences and the risk of downward mobility.

This post is adapted from “Soaking the Middle Class” by Anna Rhodes and Max Besbris. The book explores the experience of 59 households in Friendswood, Texas, after Hurricane Harvey. It is available via the Russell Sage Foundation.

Presumably a middle-class, well-resourced community like Friendswood would be able to recover quickly. But as middle-class places have become more vulnerable, they have also become more unequal, with more households facing financial precarity and downward mobility. The recovery process amplifies existing inequalities instead of reducing them, encourages people to stay in risky places rather than move away from them, and ultimately increases divisions between neighbors, making middle-class suburbs like Friendswood less cohesive and less resilient.

The federal government provides billions of dollars each year to communities, households, and businesses affected by disasters. Although this aid undoubtedly speeds recovery, it also has the seemingly paradoxical effect of amplifying inequality.

Using various measures, recent studies have shown that “inequality actually increases at a steeper rate in counties that receive more FEMA aid” along the lines of race, education, and homeownership. After disasters, White, college-educated homeowners with high credit scores appear to benefit the most, with many actually growing their wealth, while Black and Latino households with lower credit and fewer assets lose wealth and are more likely to experience long-term financial hardship and even foreclosure. Researchers documented this disparity after Harvey, as well as hurricanes Andrew, Sandy and other climate disasters. After Hurricane Katrina, there was an explosion of research on the various forms of economic and racial exploitation that cause disasters to disproportionately affect disadvantaged households and places. (For example: Cutter et al. 2014; Dyson 2006; Fussell 2015; Hartman and Squires 2006.)

The procedures for determining eligibility and aid allocation funnel greater resources to higher-income households in White, middle-class, and affluent communities. Disaster aid, like that provided by FEMA’s Individuals and Households Program, privileges the restoration of property for homeowners and leaves renters with far less. In short, the ways in which current policies distribute aid after disaster enrich already advantaged households and places. (This is an experience across other disasters as well. Harvard University’s Ethan Raker found that after communities are affected by tornadoes, they become more White and socioeconomically advantaged, demonstrating that disasters drive mobility processes in unequal ways.)

Sociologists refer to this as a “Matthew effect”—named for the biblical parable of talents in the Book of Matthew—whereby those with more money or status are better positioned to increase their advantages relative to those with less.

One of the main mechanisms driving this inequality was whether or not households had flood insurance. In 1968, the creation of the National Flood Insurance Program (NFIP) expanded the role of the government in facilitating the repair of flooded properties. The NFIP, which is operated by FEMA, underwrites flood insurance for homeowners so that, in the event of a flood, they will receive a payment that can be used to repair property and replace damaged belongings. (Some small businesses are also eligible for the NFIP.)

However, the increasing risk of flooding brought on by climate change has not been taken into account, as insurance rates have largely remained the same since the NFIP’s inception. Billions of dollars in the red for decades, the program has become increasingly controversial (Elliott 2021; Michel-Kerjan 2010). Critics argue that the program’s heavily subsidized premiums do not adequately communicate flood risk, and in 2021, FEMA announced updates to its rating methods. Yet these changes remain constrained by congressional statutory caps on rate increases. It was not until the creation of the Hazard Mitigation Grant Program in 1985 that FEMA had a disaster response tool that allowed homeowners to voluntarily leave their properties through buyouts. After a buyout, the property remains uninhabited, that is, it is removed from the housing stock entirely because of its vulnerability to flooding. The program remains small, however, and often cannot overcome bureaucratic impediments even when residents want buyouts.

The NFIP’s design is based on the assumption that restoring property will help protect homeowners’ housing wealth. Flood insurance is a critical financial backstop for homeowners in vulnerable places, but coverage is mandated only for homeowners whose property is in an area deemed high-risk by FEMA flood maps and who have a federally backed mortgage, and the reliance on flood maps to determine the mandatory purchase requirement for flood insurance will remain in place even as the NFIP adopts a new ratings system.

Yet recent flooding has not been contained to high-risk areas; “From 2014 to 2018, policyholders outside of high-risk flood areas filed over 40 percent of all NFIP flood insurance claims and required one-third of federal disaster assistance for flooding.”

Such expansive exposure to flood risk reveals that FEMA flood maps are outdated. Without up-to-date flood maps, homeowners are left with few reliable tools for assessing their risk of flooding. Those who are not mandated to have flood insurance coverage are likely to find it especially challenging to judge their vulnerability and determine their need for coverage. (See Lave and Lave 1991; Savitt 2017.

In fact, less than 30 percent of households that flooded during Harvey were insured—and the damage to uninsured property was two to three times higher in dollar value than the damage to insured property. (See Adriano 2018; Larsen 2017.) Hurricane Katrina was exceptional in that nearly 70 percent of flood-affected households had insurance. Flood insurance allowed many New Orleans homeowners to pay off mortgage debt and avoid long-term financial burdens.

Other recent storms like Irma and Florence mirrored Harvey in that the vast majority of affected households were not insured. This provides further warrant for examining middle-class communities that are increasingly vulnerable to climate-related disasters: many of these households may not know their risk and will not have insurance. (See: Atreya, Ferreira, and Michel-Kerjan 2015; Brody et al. 2017; Hung 2009; Li and Landry 2018; Michel-Kerjan and Kousky 2010; Savitt 2017.)

In communities where risk is more difficult to assess, the wealthiest households buy coverage while many of those with tighter finances do not. This variation is key in middle-class communities, which have not historically been the most vulnerable to disasters but are now finding themselves underwater owing to the effects of climate change. As the scope of climate-related disasters grows, flood maps and other tools for helping residents determine risk must keep pace. If they do not, there will certainly be an increase in the proportion of disaster-affected residents who are uninsured.

Differences in insurance coverage create more inequality as recovery progresses. Insured households are eligible for payouts of up to $250,000 for structural damage to property and an additional $100,000 for damaged belongings. After Harvey, households without insurance who received FEMA aid through the Individuals and Households Program could collect a maximum of only $33,300, an amount that is adjusted every year. In other words, the maximum insurance payout was more than ten times larger than the maximum amount of FEMA aid for the uninsured. FEMA acknowledges that the aid available to uninsured households is not enough to cover the full costs of returning a home to its pre-disaster condition.

To fill the gap in repair costs, uninsured households are eligible to apply to the Small Business Administration for low-interest home repair loans of up to $200,000 for property and an additional $40,000 to replace belongings. After Harvey, the interest on SBA loans for households was generally 1.75 percent. An FAQ pamphlet from SBA released just days after Hurricane Harvey said that affected residents could contact SBA to inquire about funds for relocation (though it did not describe application requirements, detail the process, or guarantee that loans would be available for this purpose), but all of our respondents understood SBA loans as intended for home repair.

Loans are not guaranteed, however, and if they do obtain a loan, homeowners will have a lien on their property until the debt is repaid. Households without insurance therefore face a tough decision: take on new debt, pay for repairs from savings and other forms of financial assistance, or sell their flood-damaged home. There are also broad inequalities in access to SBA loans, and less advantaged households are less likely to get loans (Begley et al. 2021; Billings, Gallagher,and Ricketts 2022).

For insured homeowners in majority-White, middle-class communities, the long-term financial consequences of a disaster may be positive. Uninsured neighbors in the same community, however, may be unable to afford to complete necessary repairs.

Those left with depleted savings and unfinished home repairs are at risk of downward mobility and are certainly more vulnerable to future shocks. Yet this new level of post-disaster inequality within communities may not be entirely visible. Indeed, it is relatively rare to know the state of a neighbor’s finances. Inequality within the community may thus be largely hidden, visible only behind residents’ closed doors and in their bank accounts.

“Soaking the Middle Class” is about a place where residents experienced the full spectrum of outcomes after Hurricane Harvey. We look at how households in Friendswood picked up the pieces, navigated recovery, and made decisions about the future. We highlight how a disaster and the policies aimed at helping households recover from it amplified inequality even in a well-resourced community. Despite all the advantages of living in Friendswood, as time has passed and differences in recovery have become more pronounced across households, community resilience has become much harder to achieve.

Some households are more financially prepared for future shocks, while others that have not fully recovered from Harvey are all the more vulnerable. Taken together, these emerging inequalities will render the community as a whole less able to bounce back after the next disaster. 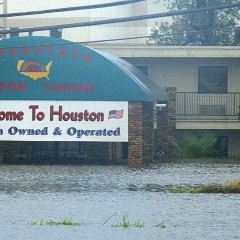 If it hopes to overcome future Harveys, Houston needs to double down on resilience and planning
INTERVIEW :  Aug. 16, 2022

A new book serves as a guide for how cities can best learn from one another to design systems and build ways to endure the worst climate shocks to come. This includes Houston’s experience—both for what to expect from a changing climate and how to respond. Its authors say Houston has done several things right, but they also worry that future disasters could outpace these efforts.