The rapid urbanization of Houston: How it happened and why it matters

From 1997 to 2016, almost 187,000 football fields of impervious surfaces such as concrete were added in the Houston metro area. A sociologist and an ecologist examined what drove growth during the period, which has had critical implications for humans and

From 1997 to 2016, almost 187,000 football fields of impervious surfaces such as concrete were added in the Houston metro area. A sociologist and an ecologist examined what drove growth during the period, which has had critical implications for humans and the environment.

The urban footprint of the Houston metropolitan area increased by 63% from 1997 to 2017. In other words, Houston’s impervious surfaces, like pavement and buildings, grew by about 1,000 km2 in 20 years.

But how much is this, really?

That’s a lot of impervious surfaces.

And, yet, the Houston metro area already had over 1,600 km2 of urbanized land in 1997, meaning that the two decades of growth that followed account for only 38% of the overall developed land in the metro area.

This environmental change means not only hotter urban temperatures and the loss of precious ecological habitat, but also rising flood risks as impervious surfaces concentrate flood waters in vulnerable areas rather than disperse them the way natural surfaces like forests, parks or farmlands tend to do.

In a new publication in the journal Land Use Policy, we asked: what social dynamics are driving recent trends in the transformation of land in Houston? And, given the fact that much of the development of land occurred before 1997, what social factors are linked to overall levels of developed land, regardless of when it was urbanized?

(The animated map below shows the growth of just the various categories of developed land coverage.)

Houston through space and time

Our approach developed out of a combination of each of our perspectives. One of us is a social scientist studying the environmental implications of neighborhood change, and the other is an ecologist who uses satellite sensors to monitor urban environmental change across space and time. We came together to integrate insights from each of our disciplinary fields to examine how the social characteristics of neighborhoods relate to how human beings alter their local environment.

What we found showcases that the answer depends on whether you are examining differences across space or time.

Analyzing what drove urbanization in the period from 1997 to 2016, we found that rapidly urbanizing neighborhoods tended to be increasing in socioeconomic status. If a neighborhood was adding college-educated and employed residents or adding owner-occupied homes with higher overall home values, then it was more likely to be urbanizing rapidly — and adding impervious surfaces.

But, if we look at the overall layout of Houston’s urban land — not just the recent changes, but impervious surfaces created at any time — an entirely different set of findings stand out.

Instead of socioeconomic status driving urbanization, we found that neighborhoods with more white residents tended to have higher levels of impervious surfaces. This was true in both 1997 and 2016, meaning that the new 1,000 square kilometers of urbanization didn’t change the overall trend.

Interestingly, these results suggest that while socioeconomic status and affluence matter in analyzing recent change, they weren’t as important in understanding the overall layout of urban land. And while the racial composition of neighborhoods is integral to understanding spatial differences in the layout of impervious surfaces throughout the Houston metropolitan area, this dynamic wasn’t as pivotal to driving recent temporal changes. In other words, social dynamics underlying urbanization depend on whether you are looking at it over space or time. And it matters because urbanization has critical implications for us and our environment. 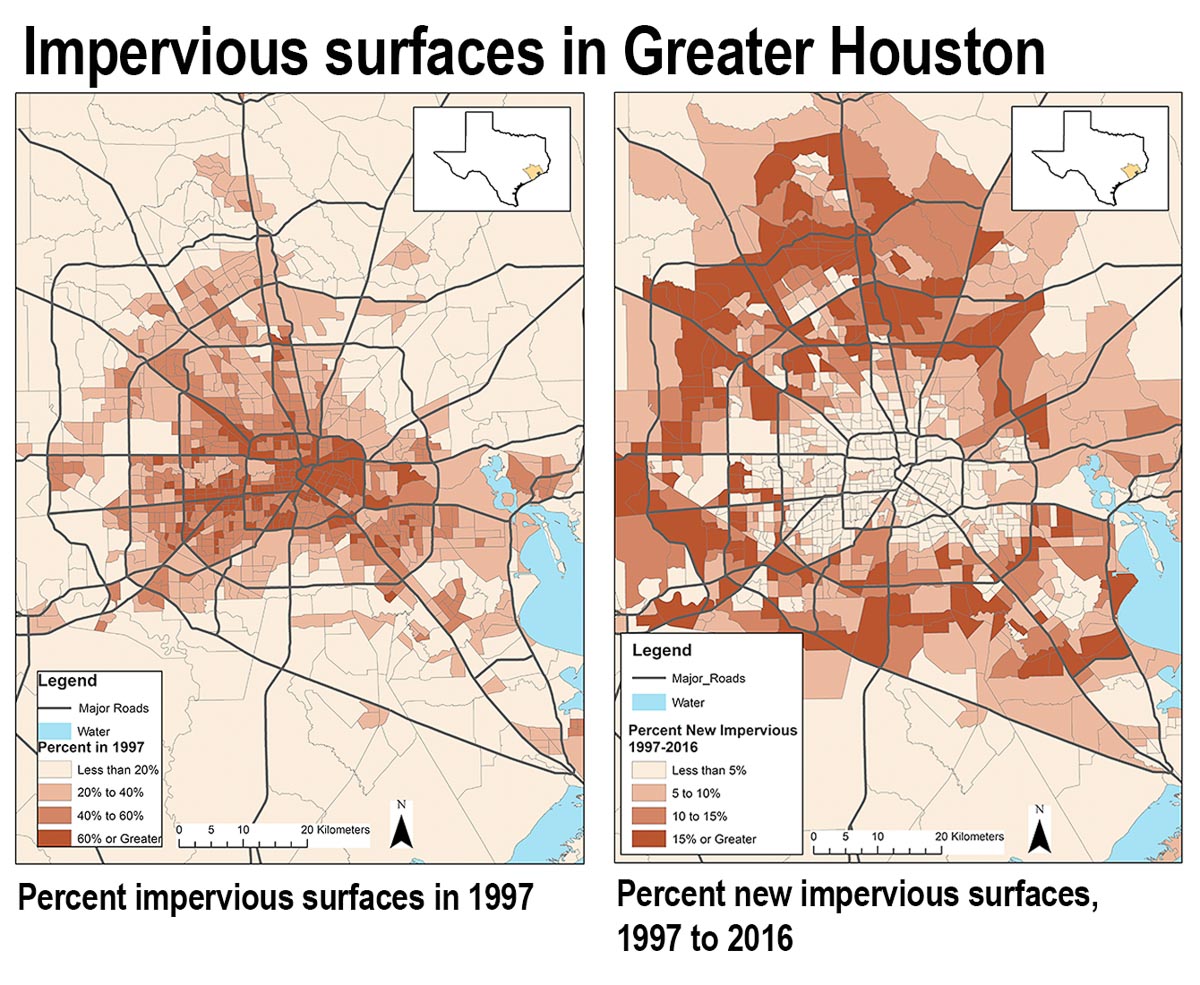 The first reason why studying the social dynamics behind urbanization matters is also the most direct: loss of local ecological habitat. Flora and fauna flounder. Hillsides flatten. Creeks and streams reroute. In their places stand concrete and steel, wood and glass. Billy Collins — the United States poet laureate from 2001–2003 — writes of landscape change in a subdivision of his poem “The Golden Years:”

All I do these drawn-out days
is sit in my kitchen at Pheasant Ridge
where there are no pheasants to be seen
and last time I looked, no ridge.

There is an indirect implication as well: rising flood risks. Impervious surfaces do not soak up heavy rainfalls the same way that natural landscapes do, not to mention the ways in which changing elevations and rerouted waterways rework watersheds. Without nature’s super sponges, water can run roughshod.

The rising flood risk from urbanization is a story close to Houston’s heart, which not only dealt with Hurricane Harvey, but with an additional series of sometimes catastrophic flood events in recent years. The impacts of these flood events occur unevenly and unequally, as a separate study of Hurricane Harvey damage by one of us found. That study showed Harvey’s flood extent tended to occur not only outside of the 100-year floodplain, but disproportionately in neighborhoods with Black and Hispanic residents. One possibility is that the amount and location of impervious surfaces underlies some of these inequalities.

Rethinking what to do about environmental change

Advocating for urbanization that is less environmentally destructive requires more than just the right tool for the job — it requires every tool in the tool kit. Living more densely, building new flood infrastructure, limiting new development, forgoing ever-expanding freeways, and integrating equitable green planning are all tools at our disposal.

More than this, reshaping local cultures and politics can have deeper impacts. Houston’s market city mentality relaxes land-use policies, downplays environmental impacts and conceives of risk as an individual issue, not a collective one. But as the climate warms, the economic and human tolls of catastrophic flooding from increasingly frequent and extreme weather events necessitate a more collective response, one that links urbanization to the imperatives of a safer, more economically sustainable and more just city.

Kevin T. Smiley is an assistant professor of sociology at Louisiana State University and a former Kinder Scholar. Smiley holds a doctorate in sociology from Rice University. Smiley is the co-author (with Michael O. Emerson) of a book on Houston and Copenhagen, Denmark entitled Market Cities, People Cities (NYU Press).

Christopher R. Hakkenberg is a Kinder Scholar and a postdoctoral scholar in the Global Earth Observation and Dynamics of Ecosystems Lab (GEODE) at Northern Arizona University.