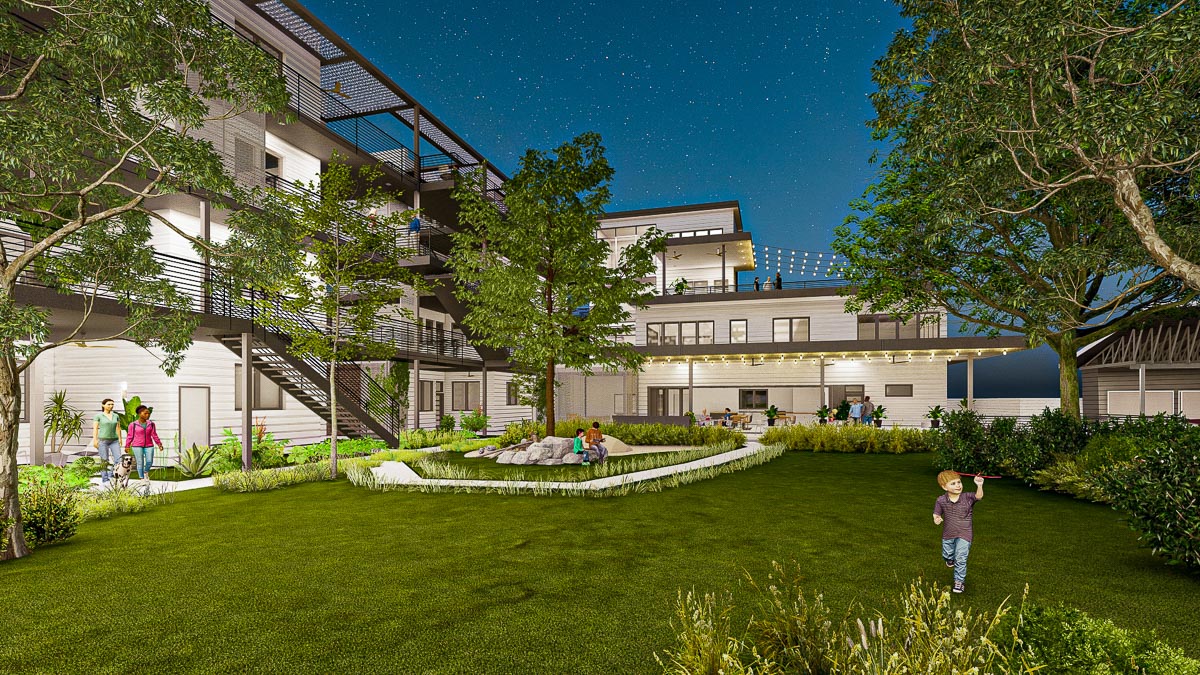 During the February freeze last year, stories of neighbor helping neighbor were easy to find. Residents with electricity offered up extension cords to charge phones, lent out gas generators to keep heaters going, delivered hot cocoa to keep their spirits up, or simply opened their homes for a few hours or a few days to provide shelter. But what if we didn’t wait until the next disaster to really know and help our neighbors?

That, in its most basic form, is the premise of a new kind of housing development that broke ground last month in Houston’s East End. The community will have 33 private units of varying size on a 1.5-acre lot ranging from one to four bedrooms, along with shared gardens, workshops, outdoor spaces, and a 4,000 square foot “Common House,” for gatherings, meetings, celebrations, and other social activities. The residents are a mix of ages and backgrounds who want to create and live in a close-knit community. The Houston project has been five years in the making, and residents expect to move into their new community—the first of its kind in Texas—in 2023.

The model itself is not new—it’s called cohousing, and the project in Houston and almost 200 like it around the country owe their inspiration to the Danish.

“I learned about this in Denmark,” said Katie McCamant, president of CoHousing Solutions, a consultancy that helps facilitate these projects, including Houston’s. “There they have more sophistication about how people live and the environment’s effect on people’s health, and how people are healthier when they have more social capital built into their lives.”

As an architect, McCamant’s experience in Denmark stayed with her, especially once she began to think about where and how she wanted to live and raise a family. But she found that no one in the US had really thought about cohousing. So, she literally wrote the book on it, bringing the idea into the conversation in the US for the first time. As she worked to build her own first cohousing community, she and her firm began to formalize ways to help other groups develop their own communities and find capable developers and financial backers to support them.

“For Houston, this is a huge milestone for the community, not only because it’s the first cohousing there and in Texas, but also because it's an achievement of the grassroots approach. That is, traditional developers aren’t the ones doing it; it’s the residents,” she said. “It’s a question of, How do we rebuild the village and not live in isolation?”

Cohousing residents become investors in their own housing project forming an LLC to act as the development entity to build their neighborhood. Once the neighborhood is built, members of the LLC purchase their homes, and they become legally a more conventional condominium association, but is a condo association where everyone actually knows each other and wants to work together.

But an interesting shift does happen when all the parties are at the table, particularly among the future residents.

“They really shift as they look to the future and think about living their values and they start to build trust with their future neighbors in the planning process itself,” she said. “It starts as a group of strangers, and as they develop trust, they start to drop barriers. They start to think about things differently.”

This process doesn’t end when the community is built; the residents are invested in maintaining the community and making adjustments as needed. Rather than contentious homeowners association meetings or condo board power plays, collaborative problem-solving rules the day, she said. When people want to sell their home in the community, the other owners often help them find new buyers who value what they have to offer.

Cohousing done well seems to blend advantages of single-family homes, with the advantages of higher density multifamily. You get a compressed “neighborhood”—cohousing projects tend to be small, with 40 or fewer units—using less land and taking advantage of some shared green spaces and common buildings. It also diminishes the downsides of single-family homes—for starters, instead of 40 homes and 40 yards to mow, there’s one common green space, which could include a playground, gardens, or other shared amenities. And instead of an apartment complex with 40 strangers and security concerns, all the residents know each other and watch out for one another.

It is easy to imagine a closer-knit community having benefits for all age groups—families, couples, single adults and retirees. And having supportive community connections sounds like a dream after the extended social isolation imposted by COVID-19, and the reality is, a worsening trend of isolation that was underway before the pandemic. Generation Z was found to be “the loneliest generation in America.” People who live in cities also report fewer social ties, particularly with the people around them: In national surveys even before the pandemic, less than a fourth of city dwellers say they know their neighbors well.

In addition to its pro-social benefits, cohousing also offers a model that lends itself to more sustainability in the long term, because it’s easier to share resources and vehicles. Community resilience is also baked into the formation of the project, as when residents know and trust their neighbors, research has shown they are better positioned to take on a disaster.

Designing for the community—not just in the buildings themselves, but in the interpersonal structures, collaborative management and social ties—makes cohousing an attractive alternative to the dominant housing choices—isolated single-family homes in sprawling communities, and tightly packed apartment units with no intentional community engagement practices. But pulling off a cohousing project does require ample resources and good guidance along the way.

“Neighborhoods could get a lot more community-oriented projects with more developers like David willing to partner with buyers groups,” McCamant said.

Post-2008 banking regulations on real estate also made financing new projects especially challenging, typically requiring more up-front capital—which can be a stretch for a new cohousing group as well. Houston’s cohousing venture is getting underway amid soaring construction costs, driven by sharp price increases for materials as well as labor. It’s also placed in an attractive, gentrifying part of the Inner Loop that is seeing extensive redevelopment.

According to the Houston Chronicle, the project in the East End priced its units between $300,000 and $800,000. The average sales price in East End is over $360,000, though new home construction there—mostly detached townhomes—is listed at significantly higher prices, putting this project close in line with the area or less expensive in some cases. The choice of location also puts the community in walking distance of a hike-and-bike trail and a Metro light rail line.

That said, cohousing prices will also vary based on the community’s market area and land costs, as well as its design, amenities, and how many participants are involved. After all, a buyer is not only financing their unit, but also a portion of the common area. Cities could make these projects more common and more accessible by making zoning codes more relaxed and offering density bonuses or affordability subsidies.

So in a place like Houston, where there are no zoning barriers to overcome, why aren’t cohousing projects more common? It mostly comes down to awareness and having residents and developers who are willing to challenge the status quo, and McCamant’s firm is setting out to train a small army of cohousing facilitators and developers through its “500 Communities” program. While cohousing has been a grassroots effort up to this point, McCamant said she’d also love to see more housing developers adopt the model for new projects.

“We have set this up—owning a single-family detached home—as the definitive American dream with 100 years of propaganda. Going against that stream is a little harder,” she said.