A Q&A with Jim Blackburn, the co-director and primary spokesperson for Rice's SSPEED Center, reveals the importance of various flood protection systems. 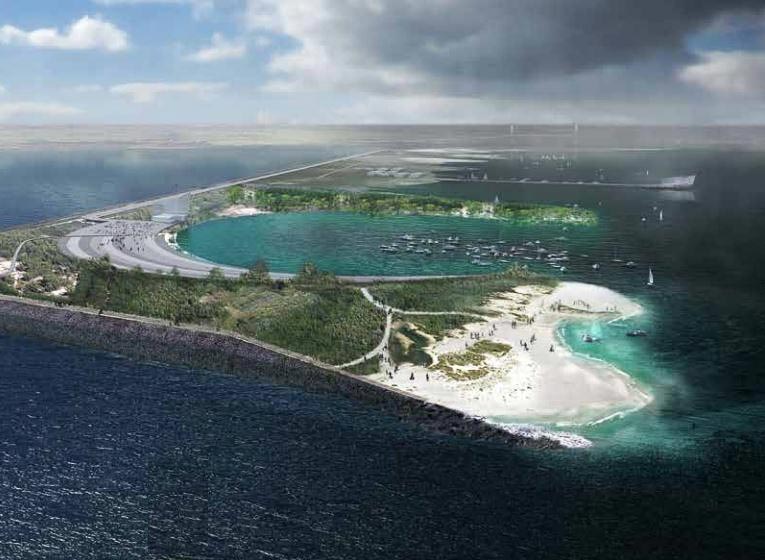 The Galveston Bay Park Plan, via the Severe Storm Prediction, Education and Evacuation from Disaster Center.

A Q&A with Jim Blackburn, the co-director and primary spokesperson for Rice's SSPEED Center, reveals the importance of various flood protection systems.

Flooding is a major concern for Houston residents and Rice University's Severe Storm Prediction, Education, & Evacuation from Disasters Center—known as SSPEED—says it has an in-bay, 25-foot-tall barrier solution that would double as a park, known as the Galveston Bay Park Plan, which has an estimated cost of $3-6 billion. But Blackburn warns their solution isn't the only thing Houston needs to do to boost its resiliency from flooding and hurricanes.

Others have classified the Galveston Bay Park Plan as a cheaper alternative to the largely-accepted, $20 billion project by the U.S. Army Corps of Engineers and the Texas General Land Office, which calls for the installation of beachfront dunes and massive storm surge barrier gates.

"One of the problems we've got is to make sure that everyone understands that these are complementary and not competitive," Blackburn said. "I think we will try to see which one we can actually get built, but we probably will need both of them before it's over."

A Q&A interview with Blackburn reveals more about his views on how Houston's resiliency can be improved by these projects.

This interview has been edited for clarity and length.

If you could explain what the Galveston Park Plan is in one sentence, what would that sentence be?

It's a navigation and flood protection project that combines recreation and environmental encampment into a single solution. It's a unique opportunity. There is a need to widen the Houston Ship Channel and we can use the dredge material to make the flood protection levy. So it's almost a once-in-a-many-decade alternative in terms of the availability. 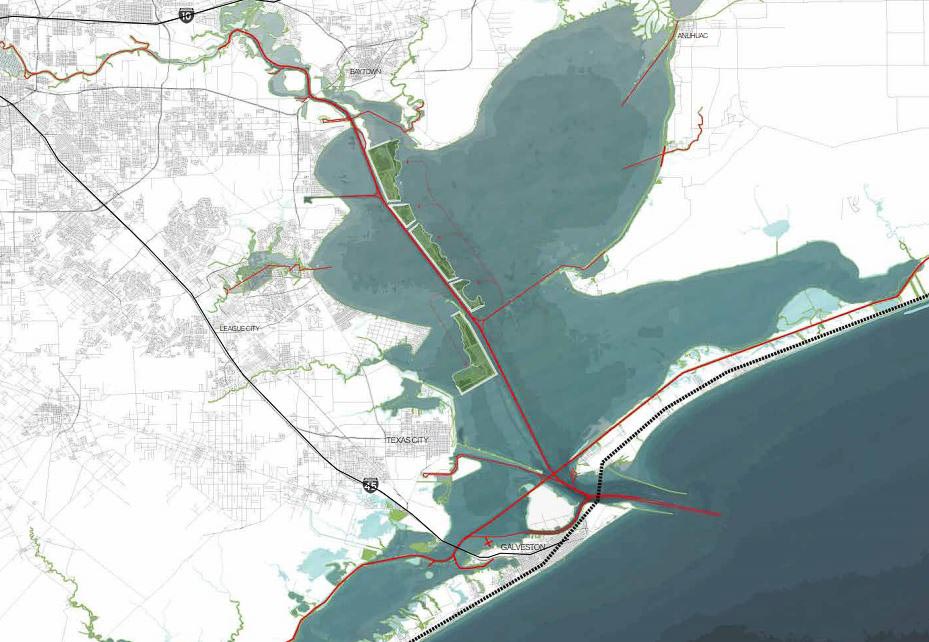 The main component of Rice University's proposed Galveston Bay Park Plan is a 25-foot-tall levee along the Houston Ship Channel that would be constructed out of clay dredged from the shipping lane. Additional dredged material would be piled behind it to form parkland. Via the Severe Storm Prediction, Education, & Evacuation from Disaster Center.

What are the challenges of the project?

So one of the biggest challenges is going to be to come up with the financing plan for a $3-6 billion project.

How do you find that funding?

What is Houston facing in terms of hurricane resilience?

We are unprotected from hurricane surge flooding. Houston doesn't often think of itself as a coastal city, but we have a significant part of the City of Houston, the Clear Lake area, down in the area lower than 20 feet of elevation. And we have the east side of Houston, the Houston Ship Channel, our major industrial source, all of which are extremely vulnerable to hurricane surge flooding.

We've never seen a surge of the size that we are concerned about. The storms that we're looking at are becoming larger, the surge component is becoming larger. If we are hit by a large storm at the location on the south side of Galveston Island and down to Freeport, it would be massively destructive with up to 25 feet of surge. Basically, the industrial complex would be flooded and put out of action. About 19 million gallons of all hazardous substances spilled. And 800,000 people at various degrees of risk. It's a nasty scenario and we're unprotected from that scenario right now.

Why hasn't surge been addressed yet?

We haven't seen this storm in the past. These storms come about once every six to eight years and it's easy to lose sight. We get flooding most every year, but we don't necessarily get these big hurricanes very often.

I've talked to many people in the industrial arena, that say, "Look, I know you're working on the modeling, but we've never seen anything higher than 13 feet. Why should we be worried?" And the answer is, no one had seen Harvey before Harvey hit. We're looking at storms that are different, but from a resilience standpoint, it's a very difficult idea to penetrate. We are truly looking at storms that are unlike the storms that we've ever experienced in the past.

How can the Houston region better protect itself from storms and flooding?

While we were working on various concepts of trying to keep undeveloped areas undeveloped, we need to develop economies that are resilient and don't require large amounts of infrastructure that can be destroyed by flooding.

Also, the idea of paying landowners for ecological services or the idea of organizing ecotourism around our existing preserves, wildlife refuges, wildlife management areas, etc. are two ideas that I think are part of an overall package of resilience that emphasizes a different type of economic activity in highly flood-prone areas.

Many are comparing your project to the Texas A&M Corps of Engineering project. Is one better than the other?

They have been considered competitive at an earlier stage. And that's simply not the case. I think one of the problems we've got is to make sure that everyone understands is that these are complementary and not competitive.

The Corps of Engineers at Texas A&M proposed the coastal spine, which is a flood protection project that's massive in scale. It was adopted early on by many of the governmental entities as a barrier down at the coast. What we're proposing is an in-bay solution within Galveston Bay. Our project is compatible with the A&M project, but we have promised that we will find our own sources of financing for our project.

Ours is less expensive and it can be built quicker. So I would think that we have a chance for faster protection with the in-bay portion, but it's going to be important to protect the backside of Galveston Island and the enhancement of the dune system. They're also talking about a major gate structure across Bolivar Road, but that is a difficult alternative without having a major impact.

Major impact on what?

If you put a big steel-concrete structure across that area, you run the risk of having a significant impact on the daily inflow and outflow of the tide. And that is essential to life all over the Galveston Bay system. Marine-life impacts are a huge issue with a gate structure. And the Corps will admit that it's a huge issue and that they're working on it, but they hadn't quite got it figured out yet. Again, they've got some work to do and so do we. And I think we will try to see which one we can actually get built, but we probably will need both of them before it's over.

Are there any other projects from around the world that these two projects are inspired from?

The Netherlands is the source of both inspiration and precedent. They have the Maeslantkering Barrier in the Netherlands, that is a huge navigation floodgate. There will be a need for a Maeslantkering-type barrier under either of these alternatives.

There is a dam/road project across the eastern shelf in the Netherlands, That is also similar to what may be required for the Bolivar Road-gate structure. And this is basically a multiple-lines-of-defense concept when you combine the two. Although I think that the coastal spine is possibly the largest, single public works project ever proposed of this type in the world. In our case, one of our benefits is that we don't have to make it the world's largest project with the Galveston Park Plan.