Houston Has Long Been A Car City. Today, Residents Are Seeking Something Else.

More than half of survey respondents say they'd prefer to live in a mixed-use area rather than a community dominated by single-family homes. 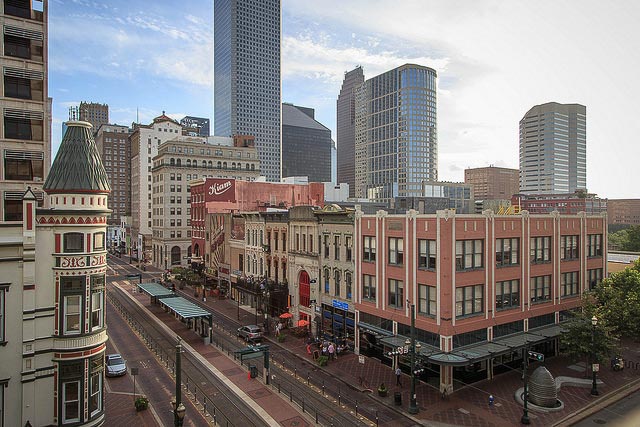 More than half of survey respondents say they'd prefer to live in a mixed-use area rather than a community dominated by single-family homes.

This post is part of the Urban Edge blog's in-depth coverage of the 2017 Kinder Houston Area Survey.

For years, Houston has been seen as a car-centric city. By and large, it still is.

Fewer than 7 percent of city residents walk, bike or take transit to work, according to Census estimates.

But the Kinder Houston Area Survey also indicates those attitudes are shifting, and today residents’ preference for “walkable urbanism” in the Houston area is more prevalent than ever.

When asked if they would prefer to live in “an area with a mix of developments, including homes, shops and restaurants,” rather than in “a single-family residential area,” 56 percent of the survey’s respondents said they’d prefer the mixed-use area.

That number has hovered around 50 percent for the last decade, but it leapt upwards in 2017. It follows a similar trajectory of a growing percentage of residents also saying they’d prefer a smaller home in a more urbanized area to a single-family home with a big yard in an area that requires more driving.

The finding mirrors national trends and comes at a time when the city is taking steps to promote walkability. This year, Houston finally approved a bike plan, after much delay; it finalized its latest light-rail expansion; and it launched a new pedestrian-friendly plaza in the heart of downtown.

The growing interest in walkability is largely due to demographic trends, said Stephen Klineberg, founding-director of the Kinder Institute for Urban Research and author of the annual Kinder Houston Area Survey.

After World War II, more than two-thirds of all American households had children living at home. By 2010, that number had been reduced to one-third. By 2020, just one-fourth of all households in America will have children living at home, according to census projections. The three-fourths of households without children may value easy access to nearby bars, restaurants and shops more than the big houses and car-dependence that are mainstays of suburbia.

“Families with children are being replaced across America by empty nesters wanting shorter commutes, by young creatives postponing marriage and having fewer children, and by increasing numbers of single-person and elderly households,” he writes in the survey report.

The growing levels of support for urban living coincide with the ongoing “return to the city” movement.

“(There are) very few people in Houston who really have the opportunity to live within walking distance of shops and workplaces,” Klineberg said. “So it’s significant that more people than ever before say, ‘That’s where I want to live.”

According to the survey, 65 percent of Houston-area millennials said they would prefer to live in an area with a mix of developments, with easy access to restaurants, bars, parks and transit centers, rather than in a single-family residential area. That’s more than is found in any of the older generations. Large majorities of black and Hispanic residents also said they’d prefer the mixed-use developments. Anglos, however, were roughly split 50-50 split on the question.

The big question is whether millennials’ preference for urban living will continue as they age. Some demographers have speculated that despite all the buzz about millennials’ love of urban living, the trend may be more of a myth.

There’s a paradox that comes with living close to a city center. Home prices in Houston are steadily increasing inside the Loop, and rental demand is growing at the same time that homeownership rates are falling. For many, the preference for an urban lifestyle may be strong. Their ability to afford it is another question altogether.

Klineberg said it’s important not to think of the findings as simply a downtown vs. suburb debate. “Developers are responding to these demands by building more transit-oriented walkable communities,” he writes, “not just in Houston’s Downtown but also in the urbanizing ‘town centers’ throughout this far-flung metropolis.”

That way, area residents might get to experience more walkable urbanism, even if they’re located many miles from the city center.